'Chameleon Street' won the Grand Jury Prize at Sundance in 1990 and then disappeared. Now, it's finally getting the recognition it deserves.

In 1990, Wendell B. Harris Jr.’s debut feature Chameleon Street won the Grand Jury Prize at Sundance, only to disappear soon after, never achieving proper theatrical distribution. But now, a restoration of the film is receiving a theatrical release at the Brooklyn Academy of Music and will have a run of showings around the world, finally receiving the attention it deserves. (It's also available to buy on Amazon Prime.) As a Black critic watching Chameleon Street in 2021, it’s upsetting to think about such an essential piece of Black cinema being ignored for so long.

If Harris’s film had been released today, it would most certainly be lauded, with distribution from a studio like A24 or Neon. Though it would be unlikely to win come awards season, it’s the kind of film guaranteed to become a critical darling. And yet, considering its subject matter, aesthetic, and execution, it’s easy to understand why distributors were confused or even put off by the film. Despite premiering in at the beginning of the '90s, Chameleon Street feels like it belongs in the '70s or early '80s, when the likes of Kathleen Collins, Billy Woodberry, Charles Burnett and Bill Gunn were analyzing Blackness from a quieter philosophical point of view. Unlike his contemporaries, Harris had little interest in depicting the grit of modern American life. His focus is squarely on the old promise of the American Dream and one Black man’s obsession with attaining it.

Chameleon Street is a unique and haunting film, combining elements of biography, drama, and psychological thriller to paint a disturbing portrait of a man relentlessly reinventing himself. It tells the story of William Douglas Street, Jr. an enigmatic Black con man from Detroit with a thirst for wealth, women, and prestige. Street is played by the film’s director and screenwriter Harris in a performance that feels eerily personal, far beyond imitation. Instead of the glossy trappings found in any standard Hollywood biopic, Harris forced us to wallow in the ugliness of a man without the catharsis of traditional morality. Street feels no remorse for his cons, and Harris has little interest in a conventional narrative arc that would force that realization. He drops us into Street’s mind and leaves us there to witness him concocting scheme after scheme with no intervention from family or friends. Though he always gets caught, Street’s superiority complex remains intact. He is never deterred, only momentarily inconvenienced in his pursuit of the finer things in life. 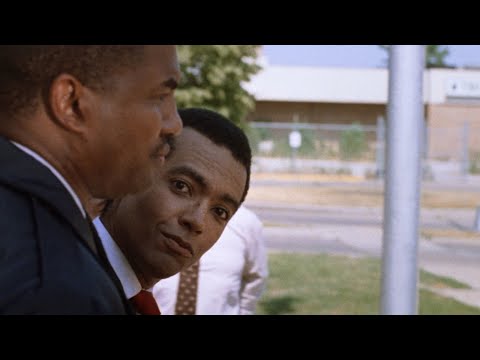 Guided by his voiceover, we follow Street through the '70s and early '80s, covering various schemes, romantic relationships and eventually, incarceration. It’s a story fully at the mercy of its unreliable narrator, with all the obvious gaps his authority desires. Street has to have control in every situation and achieves this by withholding. He keeps his feelings, frustrations and desires close to the chest, confiding in no one, never asking for help and refusing to show weakness. His mind rambles—mainly about money, women, and the struggles of being a Black man in America—but it’s difficult to tell what he’s passionate about, beyond the satisfaction of outsmarting everyone around him. The only explanation given for Street’s behavior is in the opening, where a psychologist describes him as a "complementary" that “intuits what another person needs.” As he speaks, Street’s inner monologue intrudes, eventually providing an ominous rhyme delivered in a frightening, pulsating tone over the opening title card: "I think therefore I scam. I think the air is sweet. I know not what I am. I am Chameleon Street."

With these words, Harris reveals the intention of his film—to show us the portrait of a man shaped by the conditions of American capitalism and exacerbated by the anti-Black racism it’s built on. Street is a chameleon, mimicking the remorseless greed, blind ambition, and merciless dehumanization that characterizes his environment. Despise his obvious sociopathy, in his head, Street fancies himself a gentleman and romantic. But in reality he seems to enjoy women only for their looks and sexual skill, with little interest in their interior lives. Both his second wife Gabrielle and paramour Tatiana are introduced as gorgeous and intelligent, but over time his admiration for them gives way to resentment. Street feels the pressure to provide for them, often silently blaming them for his schemes. And when the women speak for themselves, they provide no counterpoint to his point of view—most of their dialogue revolves around money, and they never seem to notice that Street never seems fully there. Despite this casual misogyny, Street has no trouble maintaining relationships with them, deploying his calculated charms whenever necessary. He’s cunning enough to keep his most disdainful thoughts to himself, while presenting the exterior image of a respectful, cultured modern man. Harris presents these women as Street sees them: as easy marks with little agency.

While watching Chameleon Street, only one other film came to mind: 1993’s Six Degrees of Separation, which tells the story of another Black male con artist who began scamming in the '80s not long after Street. The film, adapted from the 1990 play of the same name, was inspired by the exploits of David Hampton who tricked several wealthy white people into believing he was the son of Sidney Portier. The film features Will Smith as the charming scammer, renamed Paul, with Stockhard Channing and Donald Sutherland as his primary marks. The story is told from their perspective, presenting Paul as an honest, dashing young man before slowly revealing his true nature. We are never treated to Paul’s inner workings, leaving him a curious enigma.

In refreshing contrast, Harris never feels the need to humanize the people Street manipulates. Trapped in his mind, we can only cringe with disgust at his actions or surrender and revel in his depravity. There is no escape from his cold, condescending gaze or the rage that hides just behind his eyes. In the end, Chameleon Street is a horror film about the kind of monster who hides in plain sight, blending in perfectly with the society that made him.