Gaspar Noe is a kind of bad boy of French cinema, the kind of director who makes headlines for including authentic, lengthy sex scenes in his movies about love, birth, trauma, death, and the eternal void, or for laughing uproariously during the Cannes premiere of Lars Von Trier's horrifying, bloody serial killer film The House That Jack Built. Noe's new film, playfully titled Climax, follows a dance troupe through a drug-laced descent into hell after a party held in the bowels of a school goes horrifically, terrifyingly wrong. Watching Sofia Boutella scream and claw at her face while stumbling through green-lit hallways is not an experience anyone will soon forget. Noe spoke to Thrillist about how he got his all-dancer cast together, the best way to use Daft Punk songs in a movie, and whether or not death is real. 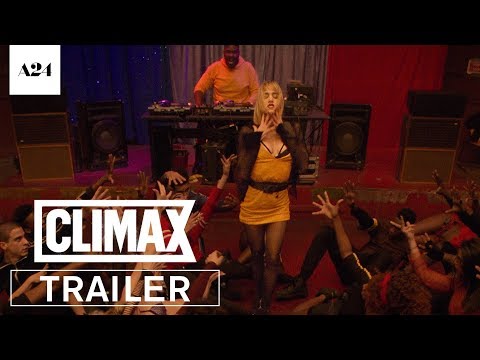 Thrillist: The movie begins with a title card that says this is based on a true story.
Gaspar Noe: Yeah, but I did not try to follow every detail of the story because that's weird. With the real stories, either you portray them exactly as they were written down during a trial or you just take the whole situation as inspiration and you recreate a movie out of it. Especially when it's an unsolved story, you can only guess.

What made you want to turn this story into a film?
Noe: I was a big fan of catastrophe movies when I was a kid. [ed. note: Noe is 55 years old.] The main catastrophe movie of those years was Titanic. This genre is about society celebrating its superiority and falling to pieces. In all of these movies, you're afraid for all of the people who are put in those close spaces and are in danger. Of course, there are some you want to survive first. And at the end of the movie, some survive, some die. It's a kind of vision of order and chaos put into a movie.

There's a lot of almost allegorical descent-into-hell and death imagery in Climax. Especially at the very end, when everyone dancing is lit in red and then the police come the next morning and the door is this white tunnel of light…
Noe: When the doors are open, it feels like the womb of a mother being ready to throw you away, and the lights on the other side of the tunnel. The whole movie is very womb-like.

Would you say it's like a rebirth through death?
Noe: What is it you're saying? "Rebirth through death?" I don't understand the expression. I don't believe in death. Death happens, but I don't believe in death as something existing. The only thing that exists is life, and flowers, humans, and all kinds of other living forms appear and vanish. For some forms life is short, for other ones it's longer. The pain is something you can describe. Death, for me, is an abstract concept that is linked to the void, but that does not exist. Only life exists.

If you get shot, there's an instant of death. If your heart stops beating, again, there is death. But then it's a biological process in which all forms of life inside your body keep on living for one, two more days, your nails keep on growing for weeks after your brain stops working. Being a human is a collective process. There are so many forms of life inside you -- you have a whole nation.

In the portion in the beginning, when you have the cast sitting for interviews -- were the movies and books you have to the side of the television screen, like Suspiria, Possession, Taxi Driver, your inspiration, or are they hints for what's to come in the film?
Noe: Oh yeah, initially, I didn't think to put those books and VHS tapes onscreen. When we did those casting sessions, they were filmed in the video format of the nineties, which has a ratio of 1:3:3, and my movie was meant to be a Cinemascope movie, with a ratio of 2:3:5, and in my first cut, the cast confessions had a black band on both sides to fill the Cinemascope screen, and it didn't look so good, so I was like, 'Ah, how can I fix this? Do I have to zoom in?' But that didn't work. And then suddenly I thought, 'Oh, let's just put the cast interviews inside a room with lots of books and VHS tapes that I still had in my basement that are linked in one way or another to the movie.' They are inspirations for the movie, sometimes because of their look, sometimes because of their stories. But it was also a way to be humble and say, 'Well, I am not inventing anything, this is the food I have eaten when I was a kid and now I am serving you a new plate made the old way.' A new dish. In French, you say un plat.

Were the actors onscreen ad-libbing or were those scenes scripted?
Noe: I barely wrote any dialogue for this move. We had a three-page storyline, like the one I had for Irreversible, and we created the scenes on vacation. In chronological order. I told all the dancers and the actors that they could use their own vocabulary and their own ideas. Just make it funny, make it touching, and improvise whatever you want. The most I kept was three seconds or one minute of their improvs. And they're not being themselves, they're being the characters. They picked out the name for the characters in the movie for their own choice. And you can see they were having fun because they were laughing at their own jokes.

If I had written a screenplay with dialogue that was in my movie, or dialogue in my previous film Irreversible, I would never have the movie financed. When the scripts are trying to do something daring, it's better not to write it down, it's better to shoot it. Because there's always some guy in some commission or in some agency that you reach to try to get an actor, you run into all these people who want to use their scissors on someone else's work.

How long did the whole movie take to shoot?
Noe: The whole movie? We shot in 15 days. We had one month to conceive it, to cast it, to cast the crew, do the location scouting, do the camera tests, and prepare. The art director had to repaint the school we were shooting in. We had 15 days to shoot it, and then two and a half months to edit it, do the credits, do the sound editing and the sound mixing. So everything has just started at the very beginning of last January, and the whole movie was finished, completed, and delivered to the Cannes Film Festival in May. Actually, I spent more time promoting the movie than doing the movie itself.

I was at Cannes last year, and saw the huge dance party you had after the premiere.
Noe: That was fun. They all were so happy to come. Because shooting was so fast and they were not used to working in the movie industry, they did not expect the movie to be shown at Cannes. They were already back in their own lives, and someone said, 'Oh, you know what, the movie's having its premiere, I guess we'll go,' and they were extremely happy. And the craziest dancer in Cannes was the 10-year-old kid!

He was great! How did you cast the film, since you're using a lot of non-actors?
Noe: I went to a few dance events like voguing ballrooms, prom battles that were held in Paris. And when I was meeting the dancers that, how do you say, talked to my eyes, I would ask them, 'Who else could you think of in France who is an incredible dancer?' And they would recommend me dancers from other families of dancing. At the end of one month, I probably met 45, 50 different dancers, and we just kept 23.

Do you prefer using non-actors for a movie like this?
Noe: This is a movie about dancers, so imagine if I had brought theater actors or TV actors and had asked them to dance like dancers. The movie would have been totally awkward, it would have been a nightmare. And also, these dancers are very playful, so for them, dancing or playing in a movie or screaming or improvising dialogue, it's all part of playing. They like games. The whole thing was the most fun shoot I ever had.

Is there a reason you went to voguing and ballroom? Was there a style of dance that you were specifically looking for?
Noe: No, not really. Voguing can be very beautiful, krump can be crazy. Whacking, which is a type of dance that I didn't know before I started casting for the movie, is a dance that plays a lot with the arms. The tall black girl, Mounia Nassangar, who hits the pregnant character, she's a whacker. She moves her arms faster than anybody. I love that dance. We even found on the 'Net contortionists from the Congo who had never come to Europe.

I hadn't seen the movie Paris Is Burning. I wanted to watch it, but the day that I watched it was very late and I fell asleep. But I watched Rize [a 2005 documentary about the clowning and krump subculture in Los Angeles] and the scene that I remembered the most was the two young boys, probably they were 8 or 9, were doing a battle of krump, that really fascinated me. So, when I started searching for dancers, I wanted to find the ones with the strangest body language and the most impressive dancing skills. But I never go to see musical comedies, contemporary dance, classical dance in the theater. I just see people dancing in clubs.

The soundtrack for this movie is incredible, you have "Tainted Love" by Soft Cell, you have "Rollin' and Scratchin'" by Daft Punk. How did you choose the music?
Noe: That's my favorite track by Daft Punk. I had a lot of records and CDs of disco music, techno music at home. I tried to put all the tracks that I liked dancing to the best. I also liked tracks that could be mainly instrumental, so that people could talk over them without having the dialogue of the dancers hitting the dialogue of the songs, which is sometimes kind of annoying. So we called some record labels to see if they had instrumental versions of things like "Supernature," "Born to Be Alive." When we constructed the timeline of music to work with we had, like, three hours of preselected music for 90 minutes of movie. There were some tracks that we couldn't afford financially, some others had legal issues that were blocking the track. The last track we could get was "Angie" by the Rolling Stones, because there was no prerecorded instrumental version, so we had to do it ourselves.

You use a lot of long takes in your movies. Is that a stylistic choice, or does it help tell the story?
Noe: Yeah, it helps the actors or non-actors to believe in the situation they're imitating. And also, from a lazy point of view, if you can shoot a whole scene as a master shot, you don't have to spend days editing that scene. You can spend so much time editing. I've lost that pleasure. When someone proposes to me a music video, I always try to do it in one long master shot.