'Coming 2 America' Saves Its Best Cameo for the Very End

Give it up for Randy Watson and his band Sexual Chocolate!

Coming 2 America, the long-awaited sequel to Eddie Murphy's 1988 comedy classic, has arrived on Amazon Prime with a bounty of cameos and call-backs worthy of a king. In addition to Murphy and Arsenio Hall reprising their main roles as Prince Akeem Joffer and his friend Semmi, respectively, the film boasts tons of appearances from actors featured in the original, including James Earl Jones, John Amos, Shari Headley, Vanessa Bell Calloway, and Louie Anderson. Then there's the music cameos: Gladys Knight, En Vogue, Salt-N-Pepa, and Davido. (Rick Ross, who let the production shoot at his spacious megamansion in Atlanta, also appears as the Wesley Snipes character's henchman.) They even got Morgan Freeman and Dikembe Mutombo to stop by.

But the movie, directed by Murphy's Dolemite Is My Name collaborator Craig Brewer, saves one of its best guest spots for the grand finale. As the business of the plot winds down—the convoluted story sends Akeem Joffer back to America in search of a previously unknown son (Jermaine Fowler) he fathered while on his original trip—the movie stages one last set-piece. As Akeem's son celebrates his new marriage, and Akeem makes peace with Snipes' General Izzi, Tracey Morgan's Uncle Reem takes the stage and introduces an immortal musical act that younger viewers less versed in the original movie might not remember: Randy Watson and his band Sexual Chocolate. 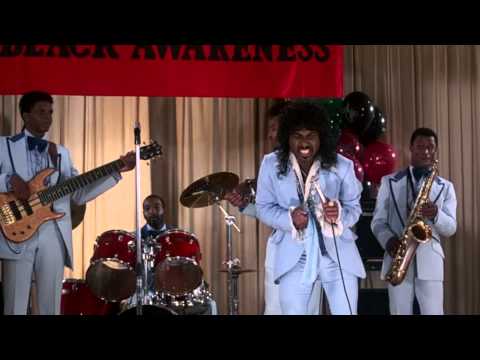 In the original movie, Randy Watson is introduced by Arsenio Hall's Reverend Brown as "Jackson Heights' own" and he receives a rather tepid response from the crowd. With his flashy suit and confident strut, Watson immediately stands out. He then proceeds to belt out a not-exactly rousing rendition of "The Greatest Love of All" and drops the mic at the end, a triumphant gesture that Murphy recently told Jimmy Fallon he more or less invented. "I defy anyone to find any footage of anyone doing that before Randy Watson," said Murphy.

It's a funny, memorable scene because of the intensity of the performance and the reactions from the crowd. At the time of Coming to America's release, audiences hadn't really seen the full range of Murphy's skills as a comedic shape-shifter on screen. He'd had theatrical hits (48 Hours, Trading Places, Beverly Hills Cop, and The Golden Child all made him a huge star and a box-office draw), he'd played many now iconic characters on Saturday Night Live (Buckwheat, Gumby, Mr. Robinson, etc.), he'd had a hit single (the legendary "Party All the Time," which hit #2 on the Billboard charts), and he'd filmed two much-quoted performances of his stand-up routines (in Delirious and Raw). But Coming to America, with Murphy donning prosthetics and makeup for the hilarious barbershop sequences and the Watson scene, was the first movie that really showcased all of his gifts.

It's easy to take Murphy's skills as a mimic and a chameleon for granted after decades of watching him play multiple characters in movies like The Nutty Professor and Norbit, but Coming 2 America serves as a reminder of his abilities. He can play romance and palace intrigue, he can sell a cheesy line if he needs to, and he can sing under piles of make-up. (Amazon even teased the return of Watson and Sexual Chocolate with a little promo video last month.) If there's a problem with the Randy Watson scene in the new movie, it's that Watson basically wins the crowd over. That shift, from genuine comedic tension to celebratory nostalgia, shows the limits of a movie like Coming 2 America, one that's a little too eager to live in the past at the expense of making you laugh in the present.