It's based on a a real community of horse caretakers in Philadelphia.

The new Netflix filmConcrete Cowboy is at its best when it is focused less on its plot than on its visually stunning documentation of the culture of Black cowboys in Philadelphia. The film, which stars Idris Elba and Stranger Things' Caleb McLaughlin, tells the story of a teenager, Cole (McLaughlin), who is sent by his exhausted mother to live with his father, Harp (Elba), a leader of the Fletcher Street Stables community in Philly. While Cole initially turns up his nose at the horses—one of whom is living in the room where he is supposed to sleep—he eventually starts to grow into maturity when he accepts the past-time and learns from it.

Director Ricky Staub concludes his movie with testimony from some of the real life riders who acted on screen, among them Jamil Prattis, who plays the role of wheelchair-bound Paris, coaching Cole on how to clean out stalls. It's footage that almost makes you wish Staub had spent less time on the fictional narrative and more with the people who are living with the horses on a day-to-day basis.

Even though Concrete Cowboy is based on a fictional novel called Ghetto Cowboy by G. Neri, it's entirely rooted in the actual struggles and passions of the equestrian community in the city, which has already been covered by the likes of This American Life and The Atlantic. (A photo essay featured in the latter publication features Prattis.) As Concrete Cowboy accurately documents, the barns in that North Philly location have been the subject of frequent coverage and occasional controversy over the years. Notably, in 2008, the city and the Pennsylvania SPCA raided and ultimately tore down some of the Fletcher Street facilities in the Strawberry Mansion neighborhood of the city, charging that the horses were unsafe, a claim that owners disputed. 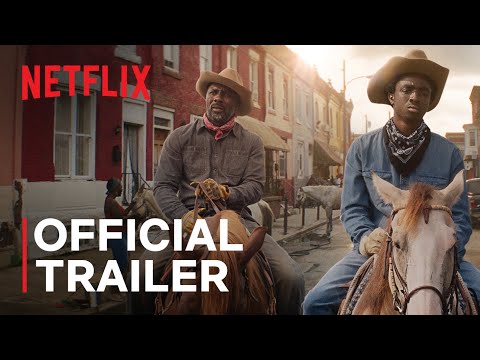 The process to rebuild has been slow, but new paddocks were completed shortly after the movie was filmed, according to a November report from Billy Penn, which focuses on the Fletcher Street Urban Riding Club. (The group operates out of the Fletcher Street Stables but was not official involved in the film, even though Prattis is a member.) Even with the progress, another challenge, one that is referenced on screen, has recently emerged.

The city's Housing Authority has acquired the land that's across from the stables to build a housing complex aimed at seniors. That plot has long been used by the riders for exercising horses. What's next for Fletcher Street is up in the air, though City Council President Darrell Clarke is apparently committed to helping the riders find a new home, according to a spokesperson who spoke with Billy Penn.

It all goes to show that the world of Black urban cowboys in Philadelphia is vast. It's not even limited to those based out of Fletcher Street. In fact, another trainer, Malik Divers, claimed in a 2019 article that he's the one who coined the term "Concrete Cowboy." And while the film tells a sweet, if predictable coming-of-age story, the history will always be more complex.