Something about watching a man screaming at passing cars on a busy highway about the #MinionSquad is deeply soothing.

At one point during the global pandemic, I finally cracked. It was when lockdowns and quarantines had ended and stores began to open up in June, friends were now traveling and hanging out and restaurants were welcoming back maskless patrons, that I slowly began to spiral. COVID-19 cases were going back up, federal agents had infiltrated cities, a historically contentious US election loomed its head; discussions about mitigating the effects of climate change were getting relegated to the back burner. In the three months of lockdown, I had found myself lonely, emotionally drained, and, perhaps, above all, bored, but I was not without hope. Suddenly, the world felt aimless and abandoned, and it seemed increasingly clear that a future did not exist. I buried myself in doomsayer articles and could not look away from breaking news bulletins on Twitter. I cried and called my mom. I cried some more.

Somewhere along the way in my misery, I decided it was time for me to allow myself to feel momentary bits of joy in the only surefire way I know: comedy TV. I began by rewatching the BBC sketch series Limmy’s Show (which, fittingly, features a bit in which series creator Brian Limond speaks on not caring about climate change because he hates future generations, anyway), then revisited FX's What We Do in the Shadows, Rick and Morty, and another Matt Berry-led UK comedy series, Toast of London. Throughout the entirety of the pandemic ordeal, surreal and absurd humor had helped to buoy me. I’d already revisited I Think You Should Leave With Tim Robinson for the sixth or seventh time, watched all of Tim Heidecker and Gregg Turkington’s On Cinema at the Cinema – twice, including a few of the Oscar Specials -- and rewatched Heidecker and Eric Wareheim’s horror-comedy series Tim and Eric’s Bedtime Stories. Even more recently, I have come back to The Eric Andre Show.

Absurd humor has added levity to a horrifyingly absurd world; we cope with what doesn’t make sense in real life with a space where it absolutely does. Popular internet memes often fold into neo-Dadaist art, and niche comedies garner passionate, viral fanbases as with I Think You Should Leave and On Cinema. Even What We Do in the Shadows managed to snag some Emmy nominations (including Best Comedy Series) for its second season this year. But the power of absurdism in dark times is, for me, most strongly exemplified in the short videos of one particular comedian, who shrieks to innocent drivers on New York City’s BQE expressway about the power of the hashtag Minion Squad. 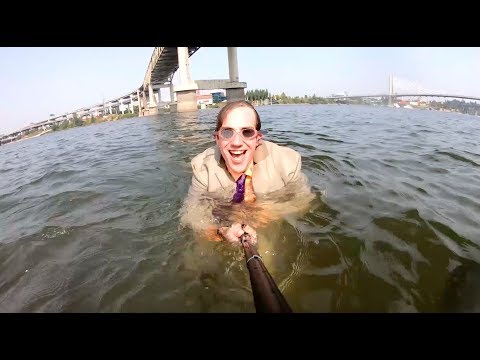 Conner O’Malley – who rose to fame for his series of popular Vine videos and was subsequently hired as a writer on Late Night with Seth Meyers in 2014 – has mostly moved to Twitter and YouTube for his particular brand of comedy since the fall of Vine in 2016. In addition to occasional guest spots on shows like Broad City, Detroiters, and the aforementioned I Think You Should Leave, he’s infiltrated Trump rallies as MAGA fanatic Mark Seevers and porno conventions, performed a talk show in the presumably filthy Hudson river, ran around Milwaukee to get the #MinionSqaud to pop off, and accosted pedestrians on Wall Street while pawning homemade “Powerade,” made from mouthwash and O’Malley’s own saliva, to get the stock market back up. In his videos, he screams, grunts, cackles, snarls, pesters people minding their own business, and slathers his face in fake blood in the name of former Starbucks CEO and Democratic presidential candidate Howard Schultz; he perfectly personifies the phrase “chaos reigns.” It would be wrong to describe the atmosphere O’Malley creates in his videos as palatable for general audiences, with its intentions meant to discomfort and disorient.

Though he often brings politics into his videos, he jabs at ideology as opposed to crafting specifically politicized humor. He is interested in drawing out the absurdity of peoples’ beliefs by becoming a caricature of them and using that to get a reaction out of people, who are either more in-line with the beliefs or otherwise. O’Malley has embodied the persona of a Reddit and 4chan-scrolling teenager obsessed with protecting his local outlet mall from ISIS, a crazed Trump supporter who emerges from a river, and a disturbed man with a bone to pick with Greg Kinnear, leading him to become the Joker in a Marge Simpson wig. Because of this, O’Malley’s brand of comedy remains, arguably, more topical and derisive of modern politics than that of many popular comedians or shows specifically meant to "skewer" politicians. He mocks conspiracy theorists, capitalists, and Evangelical Christians by becoming and gratuitously contorting them. He doesn’t specifically laugh at people’s political opinions, but at the embedded evergreen beliefs which underpin them, challenging the core touchstones which have bred our modern-day political climate.

But beyond politics and social commentary, the unhinged nature of O’Malley’s video personas are bizarrely reassuring, as if injecting myself with the most extreme form of the uncanny acts as its own panacea. Isn’t that how a vaccine works, anyway? At the same time, he both exposes the inherent ludicrousness of real life and utterly embraces it, and in a carnal, animalistic sort of way, it’s completely cathartic.

In one of his most recent internet offerings, he concocted a parody of NowThis, a popular, short video platform with an unmistakable text-on-screen aesthetic championing progressive viewpoints and “heartwarming” stories that often go viral on Twitter. [Disclosure: Thrillist is owned by Group Nine, the same parent company of NowThis.] In his video – which he dubbed “Damn 4 Real” – he becomes a man named Corb Fucker who learns how to communicate with trains. In just under a minute and a half, O’Malley’s character claims he knows what the trains wants (“for everyone to just chill and come together with sex and smoking a fat ass bowl and hot box the whole world”), comes up with a rap song about Slurpees, is invited onto The Late Late Show with James Corden due to his viral success, then masturbates on live television and is subsequently fired from his job at “the piss and shit factory.”

The video ends up perfectly capturing our culture at this particular moment: desperate for distractions, feel-good anecdotes and a hero to save us from this unending nightmare, and, at the same time, a pawn to villainize and discard of. Our attention spans are only so big, but they’re insatiable. For me, there is something reassuring in knowing that the more surreal and horrifying the world becomes, Conner O’Malley will be right there alongside it, as if showing up to take it on in a heavyweight boxing match. He takes our everyday fears and anxieties – about capitalism, consumerism, terrorism, the current political climate – and distorts them until they are simultaneously unrecognizable and utterly familiar, conveying the duality that our world exists in among the absurd. Things could never get that bad – but then again, maybe they already have. Either way, I guess I’m still breathing.