There's a moment early in the first episode of HBO's new comedy Vice Principals where Danny McBride's character Neal Gamby mumbles a string of obscenities at a vice principal played by Walton Goggins and ends it with, "You fuck yourself off." In terms of high school-set vulgarity, it makes Strangers with Candy look like Saved by the Bell. The show, created by McBride and his Eastbound & Down collaborator Jody Hill, follows the two adults as they turn a school into a war zone of steely manipulation, wounded male egos, and dick jokes.

It's outrageous -- but is it really that crazy? After all, McBride spent some time in the trenches as a substitute teacher. To determine how accurate the show's portrayal of life in the teachers' lounge is, we reached out to Chuck (not his real name), a veteran assistant principal -- he told us people don't call them "vice principals" in his district -- and former high school dean, to figure out if Vice Principals passes the believability test, or if it needs to go back to fucking summer school.

The show opens with Bill Murray's principal character retiring, leaving an open position, and thrusting the school into chaos. It's what creates the initial conflict between McBride and Goggins, and, according to our assistant principal, it's a pretty accurate portrayal of what that situation could look like.

"That actually happened at the high school I used to work at two years in a row," says Chuck. "Both the principals left for other jobs in like the third week of July or beginning of August, which creates a power vacuum. A longtime assistant principal really wanted the job and the staff was supporting him for the job, and for whatever reason he didn't get it because of some political bullshit and they hired a guy who wasn't very good." 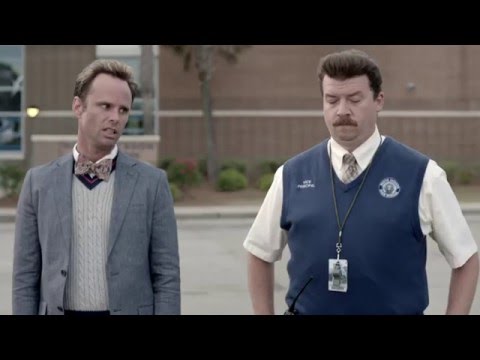 If you remember some of Eastbound and Down's more potent zingers -- never forget Kenny Powers had "a cock like a burmese python and the mind of a fucking scientist" -- then the language of Vice Principals isn't shocking. Still, it can be jarring in such a kid-friendly context. At one point, McBride tells a snot-nosed teenager, "I'll bounce you the fuck out of this school." At our source's schools, that type of language wouldn't fly -- especially in front of a student.

"Obviously within earshot of the kids, you have to keep it professional," he says. "That type of swearing? I've never done that or seen anybody do that. But I do have a colleague who I've argued with. We've yelled and screamed at each other. One time we we're yelling so loud that other teachers thought we we're getting in a fight."

"But the screaming and swearing in front of other people is not real common, at least in my district. I've heard people call each other assholes or say, 'You're a bitch.' That's pretty bad. It doesn't happen often, but I've been called an asshole -- I probably am sometimes."

The crazy fights: B

In the Vice Principals pilot, McBride breaks up a nasty fight between a few students in the hall and gets popped in the face for his troubles. But is the world of your average high school that brutal? It can be, says our assistant principal, especially when multiple fights break out at once. And the actual reasons why kids fight in school can be complicated.

"We always half-joked that the reason the kids fight at school is because they know someone will break it up and they won't really get to fight," says Chuck. "If you're a student and you have beef with someone, you fight at school and everyone thinks you fought, but nobody actually gets hurt because the staff members stop it."

"I've never gotten hit. I may have caught a stray elbow here and there. We've had a couple people get hit, but it wasn't like the kid was trying to hit the staff member. They were trying to hit somebody else and they swung and missed and hit the teacher. Usually, the kid feels bad about it. That's really serious. If that happens, you're having a conversation about whether or not the kid is allowed to go to school there anymore."

The gossiping teachers' lounge: A

Do administrators fraternize with lowly teachers in the teacher's lounge? "I never go to it because the people I like don't eat there," says Chuck. "It is the gossipy and negative 'let's come here and complain' area, so after my first three weeks I was like, 'Fuck, I don't want to go there.'"

Towards the end of the first episode, Gamby theorizes that it's better to be feared by the students than liked. He rules Lincoln High with an iron fist. Chuck agreed that it's important to command respect, and that sometimes fear can help make that happen.

"When I was a dean, there were two other assistant principals," explains Chuck. "And if the three of us walked into the cafeteria together, the kids would look up and be like, 'Oh shit, who are they looking for?'"

But Chuck was quick to emphasize that as an administrator, you never want kids to be terrified of you. You want them to feel comfortable approaching you with problems. They won't feel that way if, like Gamby, you act like a bully. At the same time, you can't be be an effective vice principal without making some enemies.

"There was a group of kids at my school who really, really didn't like me. And I used to say, 'Well, if those kids don't like me, that means I'm doing my job effectively.' I used to always say that it was the silent majority that liked us. Most kids actually were like, 'We like that these guys crack the whip a little bit and keep people in line.' There should be some fear. If the dean or the assistant principal walks in, the kid should think 'This person can get me in trouble. I want to tell the truth. I'm not going to bullshit them.'"

Maybe it's a Southern thing, but the vice principals on the show have some real sartorial flair: McBride sports a tight sweater vest and Goggins wears bow-ties that look more country club ready than school assembly chic. This was one element of the show that our assistant principal gladly called bullshit on. It turns out most assistant principals value practicality over fashion.

"As the dean I found wearing a shirt and tie was a pain because it's hard to break up a fight in a shirt and tie," says Chuck. "You might have to run outside and do something, and being in a shirt and tie is tough. In general, you're supposed to dress up a little bit more than the teachers do, but on most days I just wear a sweater."

What about a sweater vest though? "No."

Wes Rendar is a writer and contributor to Thrillist. He loved detention.