The humble heartthrob has remained a touchstone for many Y2K-era TV viewers, so here are the touchstones that influenced his own coming-out journey.

For many closeted kids watching MTV in the year 2000, Danny Roberts was a revelation. Like Norman Korpi, Pedro Zamora, and Genesis Moss before him, Roberts' casting on The Real World minted him one of the few openly gay people on television. He was a handsome and seemingly well-adjusted college graduate with a boyfriend, a US Army captain whose face had to be obscured on the show because the homophobic "don't ask, don't tell" policy was still in effect. That alone made Roberts stand out, as evidenced by the reams of fan letters he received after The Real World: New Orleans aired.

Roberts, who grew up in rural Georgia without access to cable and most other forms of popular media, explores his 22 years as a reality-TV vanguard in the recently released Paramount+ reunion series The Real World Homecoming: New Orleans. "I had absolutely no life plan," he says in Homecoming's first episode. "I was mostly in the closet, but I was seeking a catalyst to be fully out of the closet and embrace being my true, raw self, as scary as that was." Having survived the MTV gauntlet, the 44-year-old Roberts now has a 6-year-old daughter, lives in a Vermont cabin, and works as a tech recruiter.

If Roberts was an inspiration to a generation of pop-culture-obsessed queer youth, what were his own queer inspirations? During a conversation Roberts described as "meta," Thrillist asked him exactly that question.

I don't know why, but she really inspired me as a kid. With all the things working against someone like her, there's no explanation of why she was able to become what she did. It was an example of someone who could be everything that was not mainstream and still create an amazing life. Now, Whoopi Goldberg is someone very different today, but back then, she rose up against crazy challenges—that's what it really boils down to.

The Catcher in the Rye

It's not a direct LGBT reference, but I think it inspired my spirit. It was one of my favorite books growing up. I very much related to Holden Caulfield. That's where my inner rebel came from. What I took away from it was a teen kid that I very much related to who was questioning everything around him that was being presented to him as the norm—and what is the norm? Why is this the norm? 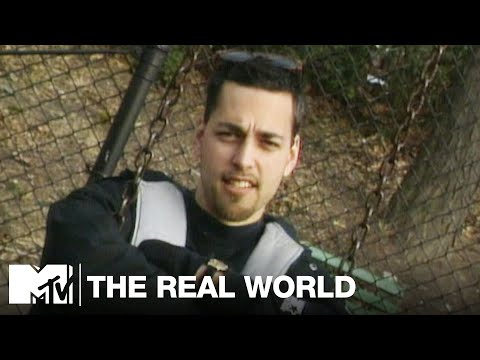 Norman Korpi from The Real World

Norm was very influential in my story. Norm, from the first New York season, was the first time in my life I ever actually saw a real-life example of someone who's gay, which was super interesting to young me. It was impactful when I saw Norm because I'd heard plenty of negative talk about gay people in my community. All I ever heard was negative, negative, negative, so seeing Norm made me think, "This guy doesn't seem anything like what I've heard." That really sparked me, more subconsciously than anything.

I didn't grow up in church life, per se, but I did grow up in the Deep South, where religion is integrated into culture and everyday life, whether you're actively going to church or not. There's very little division, even though the people there don't truly grasp that. It drives the culture there. For your reference, Marjorie Taylor Greene is the rep for my district.

But where my early dabbling came from was my time playing basketball and in Boy Scouts. I think it's super common, teenage boys exploring. I did not think of it as being gay whatsoever; I just looked at it as friendship and exploration and curiosity. I'd compartmentalize it as, "Oh, this is just a period of life; I'm not gay," because in my mind, "gay" was very much a horrible, negative thing in the culture around me. Even being cast and going on The Real World, I was still deep in deconstructing that negative picture. In fact, I think it's been a lifetime of deconstructing that negative picture.

One of them was my best friend growing up, and we're still friends. He's hetero. I think that's such a common story that no one talks about. We go on backpacking trips together almost yearly, and we've only once ever talked about it. It was, "Yep, that happened." He is as confident in himself as a human being can be, and it doesn't faze him. At the time, I didn't have the language to understand what was happening, but I was feeling attached in deeper ways than just sexual exploration. I struggled with that as a teenager without actually realizing that's what I was struggling with. When he discovered girls, I became incredibly jealous—those bitches! I didn't understand what that was until many years later.

Madonna was sort of the rebel that inspired all of us. She was pushing a lot of buttons against organized religion back then, which, from my early days, has been really important to me—it culminates in this Homecoming. I always loved that about her. I had a Sony boom box; that was my outlet to the world. I grew up in a working-class family—not poor, but not quite middle class either—so I didn't have a lot of access to purchasing media. My journey in discovering what the LGBT world was was super limited, and I honestly didn't get a peek into that until I got to university, when I had my first access to the internet.

I was at university from '95 until '99, and AOL chat rooms turned my world inside out in all the right ways. That is where I genuinely had my first interactions with real-life gay individuals—pretty much mostly all closeted. I was at the University of Georgia, and it was still very taboo to be out. The gay bar was hidden in an alley on the bad side of town. Nobody wanted to be seen going there; it was very dangerous. There were a handful of brave individuals who were out on campus, but for the most part, almost everyone was closeted back then. What people forget today—and one of my biggest fears in doing that original season—was, by being out, you were wearing a huge red letter on your chest that would limit your life opportunities. You could be, and often were, fired if your employer knew you were gay.