This post contains spoilers for the movie Solo: A Star Wars Story, and discusses a key scene and a surprise character from the ending of the movie in detail.

Solo: A Star Wars Story is a movie packed with familiar faces. Even if the young actors like Alden Ehrenreich and Donald Glover are new to their roles, the characters they're playing -- Han Solo and Lando Calrissian, respectively -- are like old friends that most of the audience will be happy to see the second they show up on screen. When you hear Chewbacca's distinct Wookiee roar early in the film, it's like a loved one calling out your name. The gang's all here.

But there's a previously unannounced guest who crashes the party towards the end of the film: Darth Maul, the double-bladed lightsaber-wielding villain most fans remember from Star Wars: Episode I - The Phantom Menace, shows up for a hologram teleconference with Emilia Clarke's Qi'ra, who will presumably take the place of the dead Dryden Vos (Paul Bettany) in helping to run the evil syndicate Crimson Dawn. Maul doesn't get much screen time -- he tells Qi'ra they'll be "working closely" from now on before logging off -- but he does fire up his trusty lightsaber while a hint of John Williams's classic "Duel of Fates" score plays. How could he not?

The cameo, which finds actor Ray Park reprising his role as Maul's body and Sam Witwer taking over for Peter Serafinowicz on voice duties, will remind viewers of Darth Vader's appearance towards the end of Rogue One. But in that bit of fan service, we already know exactly what happened to Vader before and after that cameo. In Darth Maul's case, the path forward is less clear. To help you figure out exactly what's going on with this Sith Lord, here's a breakdown of what you need to know.

What happened to Darth Maul at the end of The Phantom Menace?

For many fans, Star Wars: Episode I - The Phantom Menace, which arrived in theaters in 1999 after years of feverish anticipation, is a painful memory. Though the movie still has its spirited defenders and received some glowing reviews when it was first released, it's now typically invoked as a punchline. The constant chatter of Jar Jar Binks, the boring dialogue about the Trade Federation, and Jake Lloyd's rat-tail make it a tough hang for even the most nostalgic and forgiving viewers. But despite the movie's lackluster reputation, Darth Maul often gets a pass. Maybe it's the action figure-ready character design? The ridiculous lightsaber? The fact that he actually doesn't have much screen time in the movie?

Or, perhaps people just feel bad for the guy: After being teased in promotional material for months, he rather rudely gets snuffed out at the end of The Phantom Menace following a lightsaber battle with Qui-Gon Jinn (Liam Neeson) and Obi-Wan Kenobi (Ewan McGregor). In the fight, Maul kills Jinn and nearly kills Kenobi, but the young Jedi manages to best his horn-headed foe, slicing his body in two and sending his limbs tumbling into a pit. As far as deaths in the Star Wars universe go, Darth Maul's feels definitive. You'd need some serious reconstructive surgery to recover from an injury like that. He gets cut in half like a foot-long sandwich at Subway.

For fans familiar with the prequels, Maul's appearance will probably lead to them doing some mental math about where exactly Solo falls in the larger timeline of the series. If Han Solo is a young man here and a slightly older, more grizzled smuggler in A New Hope, then how is Maul still alive? Solo takes place before Rogue One and A New Hope, but it takes place after the rise of the Empire we see in Revenge of the Sith. If Maul died at the end of The Phantom Menace, it would be impossible for him to appear in Solo. Unless he's being re-created using one of those holograms they use at music festivals -- or, a more likely possibility, he was never actually dead at all! 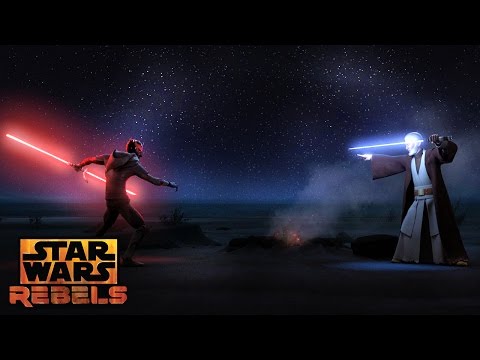 What happened to Darth Maul in other Star Wars stories?

For a guy who got cut in half, Darth Maul has been very, very busy. Even a cursory reading of the character's Wookieepedia page reveals that Maul has been a major player in countless Star Wars branded narratives since he made his first appearance in 1999. Like Boba Fett, another cool-looking character introduced with little backstory in a Star Wars film and then quickly killed off, he's long been a source of fan obsession and a reliable figure for writers to find inspiration in. His secretive quality in the movies allows cartoons, novels, comics, and video games to fill in the gaps with ease.

For our purposes, the two most important series for understanding Maul are The Clone Wars, which aired on the Cartoon Network from 2008 to 2013, and Star Wars Rebels, which currently airs on Disney XD. In these series, we find out that Maul didn't actually bite the dust when Kenobi defeated him at the end of The Phantom Menace; instead, using his Force powers, Maul made his way to a trash container and eventually found his way to a trash planet, Lotho Minor. On this planet, he created some spider-like junkyard legs for himself and eventually received newer robotic legs during a creepy ceremony you can watch here. The procedure is actually performed by his mother, an extremely powerful Force witch named Talzin. Yikes.

From there, Maul goes on to battle Kenobi multiple times and engages in a wide range of sinister behavior that's fun to read about in recap form but not exactly pertinent to how the hell he ends up talking to Emilia Clarke in Solo. It's unclear exactly how the Crimson Dawn fits into the larger world of the new Disney Star Wars films -- in The Clone Wars, Maul leads a bad guy group known as The Shadow Collective -- but it does feel worth noting that in the video from Star Wars Rebels you'll find above, Darth Maul does, again, get killed by Kenobi on Tatooine. In that version, his death appears to be permanent. But, for Darth Maul, death is a slippery concept.

Will there be more Darth Maul in future Star Wars films?

This one is harder to answer, but if I were a gambling man -- like Lando -- I'd put my money on Maul making a handful of appearances in the future. For one thing, there are many reports that Ehrenreich and many of his fellow Solo cast members are signed up for multiple Star Wars films at this point. As long as Solo is a financial success -- and, despite its troubled production history, there's very little reason to believe it won't be -- there will likely be more adventures of young Han and Chewie. (And Lando!) "I think the fans are going to define all of that," said director Ron Howard when asked about possible sequels. Translation: If you pay to see it, they'll keep making them.

Besides new chapters in the Solo saga, there's also the possibility that Maul could play a role in any of the additional "Star Wars story" films that Lucasfilm and Disney clearly hope to keep making. If there's an Obi-Wan Kenobi stand-alone on the horizon, Maul could certainly make an appearance in that, and face off against his old Jedi rival. At one point Disney was very close to making a Boba Fett movie directed by Fantastic Four filmmaker Josh Trank, but they ended up pulling the plug on that one and just greenlit a Fett film by James Mangold (Logan). Is a Darth Maul biopic completely inconceivable? I'm tempted to say yes -- a little Maul goes a long way -- but stranger things have happened in franchise-land.

At the very least, the casting of Sam Witwer as the voice of Maul suggests that the filmmakers are looking to appeal to the fans of the Star Wars animated series, which are still considered canon. Witwer is an actor who has appeared on shows like Smallville, Battlestar Galactica, and Being Human, but he's best known in Star Wars world for providing the voice of Maul in The Clone Wars and Star Wars Rebels. (Peter Serafinowicz was the voice in The Phantom Menace.) His presence is an Easter egg for Star Wars devotees, but it could also be a hint of what's to come.

If we follow Han, Lando, Chewie, and Qi'ra into future movies, it's very possible we'll be hearing Witwer and seeing Park twirl that double-sided light-saber again. Hopefully, he'll avoid getting cut in half next time.