How 'Deadly Class' Put Together Its 'Breakfast Club' Homage Episode

In the very first episode of Deadly Class, Syfy's '80s-set new series about a school for assassins, disaffected goth Petra has an idea: the best way to off a lot of affluent teenagers would be to hold a screening of a John Hughes movie in a secret theater that's actually a furnace. "It's a simple solution," she mutters. "Burn them all." Deadly Class doesn't follow that advice with its fourth episode, "Mirror People," but the series does pays direct homage to John Hughes with a clever take on The Breakfast Club.

The show itself, of course, takes place at a school ruled by cliques -- only the cliques at King's Dominion are more like prison gangs, since the students are effectively representatives of the criminal and intelligence organizations that their parents belong to. At the top of the food chain: the Soto Vatos drug-cartel kids (led by the menacing Chico), who, as Billy explains to Marcus, are like "star football kids at a normal school." Then there are the Preps, who parents are mostly affiliated with the CIA and the FBI. There's also the Dixie Mob, a group of white-supremacist neo-Nazis (led by Brandy Lynn); the South Central gangbangers in Final World Order (led by Willie); and the Kuroki Syndicate's Yakuza kids (led by the enigmatic Saya). Lower down in the school's pecking order are the Hessians and the Jersey Kings, whose parents are East Coast mobsters. Not everybody is connected to one of these groups, though, and those who aren't -- like Billy, Lex, Petra and Marcus -- are called rats.

Since the kids are also defined by their musical tastes, co-creator and co-showrunner Rick Remender gave each of the actors a playlist of tunes to help them get into character, as we learned during a visit to the Vancouver set of Deadly Class. Liam James, who plays Billy, was prescribed a lot of punk, such as the Damned, the Descendents, Minor Threat, and the Misfits. Benjamin Wadsworth, who plays Marcus, was loaded up with the post-punk sounds of the Smiths, the Cure, Echo and the Bunnymen, and others. For Luke Tennie, who plays Willie, it was a trove of O.G. hip-hop, like N.W.A., Run-D.M.C., Kool Moe Dee, Eric B. and Rakim, and Too Short.

"The first song on mine was something about how the world is on fire, hate the world," said Lana Condor, who plays Saya. "It was really angry!" Accordingly, most of the Deadly Class soundtrack consists of deep cuts from the bands on the playlists. And in another nod to John Hughes, deep cuts from his film soundtracks, such as New Order's instrumental "Elegia," used in Pretty in Pink, also find new homes here.

"One of the things I wanted to do was a Mad Men-style snapshot of the authentic '80s underground," Remender said. "That means a soundtrack of oi punk, skate punk, thrash, goth, and hip-hop. We get into all these various subsets that defined us so much growing up in the '80s. You basically found your ideology and you found your tribe through the music. You could see somebody in a Dead Kennedys T-shirt, and you knew your politics and your philosophies on life would be similar-ish. You start talking about music, and you're off to the races." 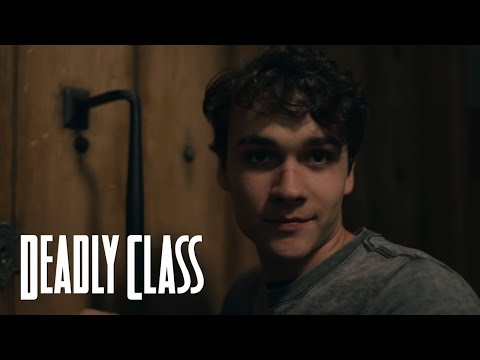 So music is one way to bypass the show's clique barriers, as we see when Marcus, Viktor, Chico, Petra, Saya, and Jaden land in weekend detention together, confined to the library. "We're obviously and very blatantly just biting off The Breakfast Club," admitted Remender's co-creator and co-showrunner Miles Orion Feldsott. "Because we want to deconstruct it a bit." The "Breakfast Club episode" is a trope for coming-of-age TV shows at this point, having recently come up on Riverdale, but also a memorable first-season episode of Dawson's Creek. On Deadly Class, Chico is the Judd Nelson/Bender criminal antagonist type, Saya is sort of a Molly Ringwald/Claire Standish princess type, Petra is the Ally Sheedy/Allison Reynolds goth basket-case type, and Viktor is a stand-in for the Emilio Estevez jock type. "It's so funny, because we're locked in a room with one of each clique, only it's for 48 hours" said Michel Duval, who plays Chico. "And there's not that much food!" added Condor.

As in the movie, the kids are adversaries when the episode begins. But things mellow out after they break into something better than Bender's locker. The confiscation closet is filled with Pop Rocks, mini-bikes, cotton candy machines -- "everything that a kid from the '80s could ever want," Feldsott said. "They're just being super stupid kids, and they find common ground." Like, who would have thought that Chico and Marcus could bond over the same Cure album?

"I really feel like this is an episode where you forget about the assassins-in-training stuff, and you see them as kids," Duval said. "They can finally just be kids around each other." But then, of course, "all hell breaks loose," Feldsott noted, and the episode's tone shifts from The Breakfast Club to Tarantino bar-and-grill.

Another period homage in Deadly Class involves the casting of poisons teacher Jürgen Denke. He's played by hardcore icon Henry Rollins, whose old band Black Flag is an obvious influence on Billy's character (he sports a Black Flag T-shirt in episode four) and on Remender's writing as well. "In terms of finding people who speak your language, who can express something you thought incapable of expressing, Henry Rollins was that for me," the showrunner said. "Henry's views on the world, on misogyny, on racism, and all the horrible shit that he perceived and processed and laid bare -- Deadly Class exists because of Henry's influence on my life."

The production team originally wanted Rollins to play the fight instructor, but he suggested that the poison-lab teacher would be a better fit. So the writers swapped a few things around for him and made Denke a bigger part. "He came in very prepared," Feldsott said. "He did a version of the character with an accent, then a version without an accent, and he was also very excited to do the stunts."

"He's the patron saint of our piece," said actor Benedict Wong, who plays the school's dean, Master Lin. "He's the jagged-glass cherry on the cake."