Punk rock is alive and well, and it smashed up a Denny's banquet room last weekend.

Footage of a raucous Dec. 14 hardcore show inside a Denny's restaurant in Santa Ana, California, has racked up a collective millions of views across Instagram, Twitter, and YouTube, garnering praise and more than a few logistical questions, namely: Who would think to do this, and why?

The person who pulled it off is Bryson Del Valle, a 17-year-old high school senior from nearby Costa Mesa. Speaking by phone Tuesday night, he said this was the first show he ever organized, and he was still a little surprised that he pulled it off. I tracked him down via a GoFundMe page that the Long Beach hardcore band WACKO put up to cover the $1,800 worth of damages to the Denny's that happened during their performance. (Green Day -- yes, that Green Day, which came up playing shows at the legendary DIY venue 924 Gilman in Berkeley -- donated $2,000.)

Since Bryson told me he's 17, I checked in with his mom about doing a story. "He's so responsible," said Catherine Del Valle. "We've always said, 'You make a mess, you clean it up.' He made a mess at the Denny's, and he called about the damages."

Asked for comment via email, WACKO wrote back that do-it-yourself punk communities pull off shows like this one "all the time."

"Don't get me wrong Denny's was tight and Bryson is forever a legend but what people need to take away from this story is that there's a whole network of tight-knit musical communities in this punk stuff and it's what keeps lots of kids going in this bullshit world left behind for us," they wrote.

On the phone, Del Valle spoke in calm, level tones with occasional fits of laughter. 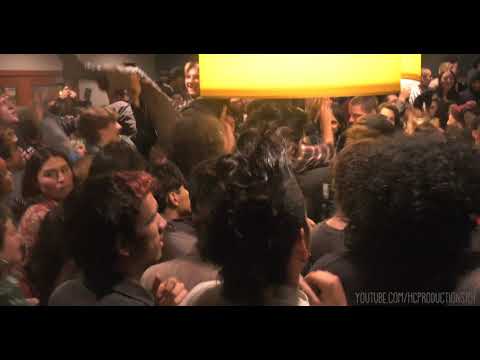 Thrillist: Why Denny's?
Bryson Del Valle: Because of the meme, honestly. There was that meme of "What the fuck is up, Denny’s?" from that show at a Denny's in Texas in 2013.

So you were making an IRL meme, then?
Del Valle: Yeah, pretty much.

How did you approach Denny's about this? Did you just walk in and ask to speak to a manager or what?
Del Valle: Oh, I called them and then asked for a manager, and then once I got to them I was like, "Hey, do you think I'd be able to throw a show in a spare room or something like that?" and he was like, "Sure." I just had to pay them money.

So they were very chill about this.
Del Valle: Yeah, they were cool with the idea of a show. They didn't know, though, what kind of show it was gonna be because they didn't really ask any questions -- which is the sole reason the show was able to happen in the first place.

Was this a normal night of business? Were people there eating dinner at the same time in the other rooms?
Del Valle: Oh yeah [laughs]. Yeah [laughs more].

Did you cross paths with people on the way in? What was it like sharing a space with the usual Saturday night Denny's crowd?
Del Valle: Well, in the banquet area it was pure punks, and I honestly didn't even notice any other people throughout the Denny's. I know there were other, like, normal people eating there in the bigger area of the Denny's, but I didn't really see any reactions from them -- although that would have been hilarious.

What did it feel like to pull the thing off and be there for the show?
Del Valle: God, I felt so accomplished because I was super stressed out about it, because this show had been hyped up for months, and the fact that it was finally happening was just so crazy. I just wanted to make sure that WACKO played, even for like two minutes. I just wanted to get WACKO to play as soon as possible so it could happen.

The fact that management let this go on for 20 minutes, did that exceed your expectations?
Del Valle: Oh yeah. All of it exceeded my expectations. The fact that no one got arrested, or that I didn’t get arrested, was very surprising. That's honestly what I thought was going to happen, was some riot type shit, because it was like 200, 300 people at a fuckin' Denny's. A recipe for disaster.

If we can talk about the business side of this, did you make money? Did the band make any money at this?
Del Valle: I came out, I guess like 50 bucks richer from it because it cost me 100 bucks -- oh wait, shit, nevermind because of the damages. But it cost me $100, WACKO didn't even ask for money, they just wanted to do the show because they thought it'd be really fun. I mean I didn't really keep track of the business side of things; I'm just enjoying the music and shit like that.

Coming back to the whole "What the fuck is up, Denny's?" phenomenon, what does it mean to you?
Del Valle: I don't know, I guess just the hype and wanting to go hard as fuck, that's kind of what it unlocks in a sense, and the phrase "What the fuck is up, Denny's?" makes you wanna go hard and start a fuckin' circle pit. That's what it unlocks in me at least.

What is the punk and hardcore scene like where you are? Are there other more traditional venues where you could have booked an all-ages show?
Del Valle: There's places like Chain Reaction, and, well, if you're fuckin' wack you pick Malone's, but Malone's doesn't even do hardcore shows. Honestly most of the shows I go to are in backyards and shit like that. That's usually where the good hardcore shows are at, is in DIY spots.

The crowd in the video skews younger, but there is one older gentleman in a cowboy hat who introduces the band. Who's he? What's his story?
Del Valle: Oh yeah, that's Michael. He is the father of the bass player of WACKO, Luke. He's just kind of a figure when it comes to WACKO. He's always been around at shows from what I can remember, supporting the scene and shit like that. He's just an all-around good guy.

I know this is an annoying time to be asking this, but what are you doing after high school?
Del Valle: I started this company called Bastards Club, which is a skate apparel company, and so I'm pretty much just gonna work on that as much as I can through community college, and if that doesn't work, do freelance photography and design, stuff like that -- and probably this as well.

Honestly, throwing that show was insanely fun and I got to meet a load of really cool and interesting people. It was one of the best decisions I've ever made in my life. For sure.

This interview has been edited for brevity.

Paul Bowers is a writer, father of three, and badly aging metalhead from South Carolina. He tweets at @paul_bowers and writes a weekly newsletter at brutalsouth.substack.com.