How 'Dickinson' Makes an Emily Dickinson for the Billie Eilish Era

Dickinson creator Alena Smith sees a parallel between poet Emily Dickinson and pop star Billie Eilish. On its surface it sounds absurd, but when you think about it, Smith's assessment actually works. Both Emily and Billie are mysterious women obsessed with death-related motifs. "We used a couple of Billie Eilish songs on the soundtrack," Smith says. "I've heard this phrase that Billie Eilish's music has been described as 'gloom pop.' I think that is the right phrase for the aesthetic of Dickinson as well. I think we live in a gloom pop moment."

This blending of literary iconography with modern references is what defines Dickinson, quite possibly one of the wildest shows to enter the ever-expanding content landscape on Apple's new streaming service, Apple TV+. Dickinson is, yes, about Emily Dickinson, but it's about Emily Dickinson as played by Hailee Steinfeld, and it exists somewhere on the spectrum between Masterpiece Theatre and Riverdale. Emily, as defined by Smith, is not the virginal recluse of your high school English class. Instead, she's a vivacious rebel who does opium and is having a secret affair with her brother's fiancée, Susan Gilbert. (This is not so far off from what some scholars believe to be true about Dickinson.) It's all just strange enough that it works.

For as ahistorical as the show seems, Smith has done her research. One of her initial inspirations for the series was Alfred Habegger's biography of Dickinson, My Wars Are Laid Away in Books. "I think [it] does a really nice job of depicting her coming-of-age years and early 20s," Smith says. "Unlike our received image of Emily, which is the virginal shut-in spinster alone in her room in a white dress, Emily in her younger years was more or less a social rich girl who lived in Amherst and went to sledding parties and candy pulls and had suitors and had this wild relationship with Sue who later became her sister-in-law."

In the seven years when Smith was trying to get the show made, she intensely researched both Dickinson and the period in which she lived. Still, she admits that she's not hewing closely to the facts of her life for the episodes' plots. Instead, the stories take cues from Dickinson's poems. The pilot, for instance, riffs on one of Dickinson's most famous works, "Because I could not stop for death." "The whole thing is really like a kind of poetic response to this poet rather than a literal transcription [of her life]," she says. "I like to say if we made a TV show of really what Emily Dickinson's external life was like, it would be a very boring show. So we're lucky because we get to go on a carriage ride with Death and be drunk with a bumblebee." (The bumblebee, FYI, is voiced by Jason Mantzoukas.) 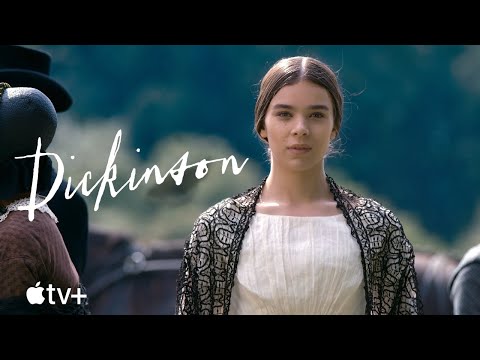 In Emily's first scene she says the word "bullshit." She's referring to the notion that she has to go get water for her family instead of her brother Austin. "They're still humans, they still feel, if they could emote in ways that we do now, what would that sound like?" Steinfeld says. "It was so exciting to me to play into that, because the reality of a situation like that is bullshit."

Steinfeld admitted that blending the modern attitude with the period aesthetic took some getting used to. "I have done period pieces in the past, one being Shakespeare, and of course you're just like high and tight," she says. "You can't stray. There's a certain cadence you have to fall into. Emily Dickinson broke just about every rule. So we broke some of the rules on this one too."

Smith's career is full of this kind of dichotomy. She's a playwright with credits on dramas like The Affair and The Newsroom who became best known for her Twitter account-turned-book "Tween Hobo." "In my core I am, in certain ways I guess, a pretty serious dramatic writer, but at the same time I spend all my time on Twitter and I like ironic internet memes," Smith says. For Toby Huss, who plays Emily's strict father Edward, reacting to Emily's vocabulary is no different than reacting to his own daughter's. "If my kids are saying modern things, to me that's the same as my daughter when she's 16 in, whatever, 2014 saying things to me that I don't understand as a parent," he says. "What are you fucking talking about, you Los Feliz kid? I don't get it."

The 1850s are like a "funhouse mirror" reflecting today's world

Smith found herself more obsessed with the time period in which Emily was writing, and was eager to dig into how it reflects a millennial's image of America in 2019. "I think that we are using this time period as a way of looking at ourselves," she says. "I would say in the writer's room, 'If it's not about today it doesn't belong in the show.'"

A major arc in Season 1 involves Edward's run for political office. "We get to play with like what was true in the 1850s about Whigs and Democrats and Republicans, and those buzzwords didn't mean at all the same thing that they mean today," Smith says. She's also inching the plot toward the onset of the Civil War, a topic referenced in the pilot. "That was the time when her brain was on fire," Smith says of the war. "It's as of all the violence that was happening in the nation was expressing itself through the channel of her work. And yet she's not regarded as a war poet, she's regarded as a woman who was absolutely cloistered from the politics at hand."

Smith is also very aware of the contradictions in Emily's life as a privileged white woman who nonetheless was battling a system that denied her certain rights. "One question I personally have is: When we have privilege does it really mean that we aren't part of what's going on? And perhaps when we stop to examine that privilege maybe we find that it's built on violence that's happening to other people."

While the above sounds all very serious, please note that Smith also compared Emily's life to a beloved sitcom. "I always knew it was going to be a half hour show and not an hour, and part of the reason for that is in the external world of Emily's life nothing really changes," Smith says. "It's kind of like an episode of The Office or something, right? She just ends up back at her desk again, no matter what craziness has gone on. But of course, inside, she's feeling the most intense feelings that anyone could have." So, yes, in a way Dickinson is structured just like any other comedy with a coming-of-age spin in this first season, focusing on Emily's relationships with her dad and Sue.

Smith had fun playing with various historical figures who Emily would encounter. She cast John Mulaney as a Henry David Thoreau who isn't quite as in tune with nature as one would expect, and Zosia Mamet as a Louisa May Alcott who tells Emily that she can publish as a woman. But no guest appearance is more surprising and hilarious than Wiz Khalifa as the personification of Death, who offers Emily a joint. How the fuck did this happen? Smith credits destiny. She had put him on mood board for the character, and eventually got the script to his manager. He got what they were going for. "To have somebody that represents, you know, good humor, good fun and creativity and freedom and danger in a sense, playing that character," Steinfeld says."I really couldn't think of a better fit."