The F*cked-Up Twist to 'Don't Breathe' Exists to Offend

Warning: this post contains spoilers for the movie Don't Breathe, and in particular an exceptionally gnarly scene. Reader discretion is advised.

To stir up buzz for his shlocky horror movies, legendary director William Castle would distribute barf bags to audience members, teasing the sickening shocks to come. His successors tried similar publicity tactics, though the movies rarely justified the stunts. Don't Breathe, a home-invasion thriller about a trio of teenage thieves facing off against a blind man, deserves such precaution -- and it's not throwing in the barf bag.

If you saw Don't Breathe this weekend -- and judging from its $26 million box-office haul, there's a good chance you did -- you know what scene could leave the squeamish balled up on the floor. Even if you have a friend who saw it, you probably heard them say something like, "This movie really… goes there," or, "I can't believe they did that," or something equally ominous. If you read reviews, you probably saw veiled references to a moment that the writer either praised for its sadism or criticized for its poor taste. It's that type of scene. Let's get into it. 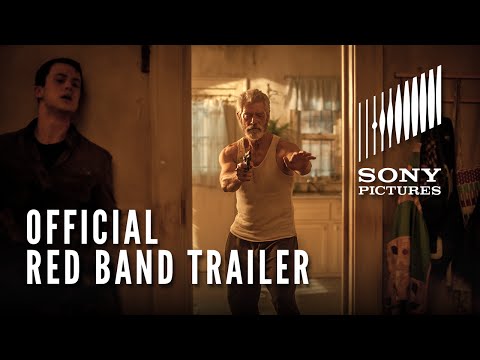 Don't Breathe's big reveal unfolds in two parts. The first comes over halfway into the movie, when the film's teenage antiheroes Rocky (Evil Dead's Jane Levy) and Alex (Goosebumps' Dylan Minnette) discover that the blind man (a very buff and grizzled Stephen Lang) keeps a young woman locked in a terrifying harness in his basement. Thanks to a conveniently available newspaper clipping, Rocky and Alex also learn that the bound-and-gagged woman killed the blind man's daughter in a drunk-driving accident, and he's keeping her there as a form of punishment. They quickly free her.

While the teenagers and the new girl attempt to escape the basement, the blind man -- he's actually referred to as "the blind man" in the credits -- accidentally shoots his former prisoner. As she bleeds out on the floor, he cradles her in his arms and cries. Why is he so heartbroken that his daughter's killer is dead? What's going on with this guy?

The second reveal arrives a few scenes later, after the blind man seemingly kills Alex with a pair of garden shears and captures Rocky, placing her in the same harness he was keeping his daughter's killer in. During this scene, we finally figure out why the blind man has been working so hard to rid his house of these home invaders. "She was pregnant with my baby," says the blind man, referring to his old prisoner. "You killed them both."

That's not even the most fucked-up part! As Rocky struggles in the harness, screaming for help, we watch the blind man cut an opening in her pants with a large pair of scissors and approach her with a turkey baster. His disgusting plan becomes clear: with his daughter's killer dead, he's now going to impregnate Rocky to "replace" his dead daughter. He even has a deranged justification for his actions: "There's nothing a man can't do once he accepts the fact that there's no God."

Luckily, before he can insert the baster, he's attacked by a mallet-wielding Alex, who was actually alive the whole time. (In one of the film's slightly confusing twists, he tricked the blind man into thinking he killed him with the garden shears.) After Alex restrains the blind man, he frees Rocky from the harness. Shaking with rage, Rocky plunges the baster right into the blind man's mouth and squeezes tight. It's even grosser watching it.

The audience I saw the movie with went nuts at this part. There were screams. There were gasps. There were even some horrified laughs. As Jezebel's Rich Juzwiak points out, the moment probably owes more to subversive movie king John Waters (Pink Flamingos) than modern scary movies like Paranormal Activity, Insidious, or The Conjuring. Rocky, a classic "final girl" in the horror-movie tradition, turns her evil attacker's phallic weapon against him, and provides the movie with its most cathartic (and gag-inducing) scene.

The moment was designed to be a conversation starter. In a revealing interview with SlashFilm, the movie's director, Fede Alvarez, the twisted mind behind 2013's unrelentingly brutal Evil Dead remake, talks about wanting to have one scene that divides audiences. "I think this movie should be provocative and should push boundaries," he says. "All of the classics have at least one scene, one moment, that was completely fucked up."

I can understand critics of the movie finding the moment to be a queasy shock tactic, especially because most of the movie is a David Fincher-like cat-and-mouse game, not a Human Centipede-style exercise in extreme body horror. Though turning a horrifying rape scenario into yet another way to ratchet up the tension can feel cheap -- the movie certainly isn't going to take time to unpack the situation. This movie is not for everyone. But, putting aside whether you find the moment effective or offensive, I think Alvarez is correct that this is part of what horror films are supposed to do. They can be problematic. They can be stupid. They can even be indecent.

As modern horror movies rely more on CGI ghosts, noisy jump-scares, and found-footage gimmicks, it's rare to see a movie that's genuinely attempting to unnerve you. "Go back to Psycho and The Exorcist," says Alvarez in the interview. "People were losing their minds, running out of the theater, fainting… it was all kinds of madness! And that's what made those movies as big as they were and so polarizing."

Judging from the heated debates I heard walking out of the theater, I think he succeeded in making a polarizing movie. The only thing that will unite viewers is this: you'll never look at a turkey baster the same way again.

Dan Jackson is a staff writer at Thrillist Entertainment and he was breathing the last time he checked. He's on Twitter @danielvjackson.