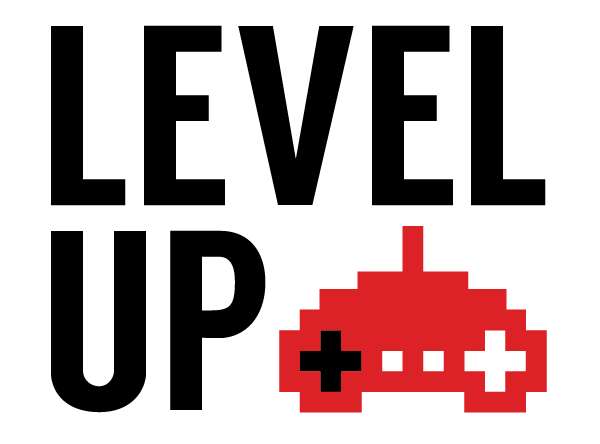 It's old as hell now, and so heavily pixelated by today's standards that you can't help but wonder if it's been censored somehow, like an inadvertent crotch reveal on Jerry Springer. But back in 1993, no first-person shooter pushed the still-fledgling medium of video games forward more dramatically, or in a shorter amount of time, than Doom.

Its debut was one of those rare landmark moments in the industry, the kind that, after it had shipped and the world understood exactly what it was, reorganized the history of video games into two parts: "pre-Doom" and "post-Doom."

The guys at ID Software, the company behind Doom, certainly didn't think the pentagrams and the shotguns and the gore -- hey, is that wall decorated with fucking human skin? -- was going to cause an uproar. The game was dark, yes, but it was dark in the way that a Halloween hayride is dark in October. ID Software didn't take it seriously. But back in the early 1990s? Plenty of other people sure did.

Doom's impact would be felt not just in the tech and video-game realms, but across pop-culture in its entirety. You can still feel it today, 23 years later. 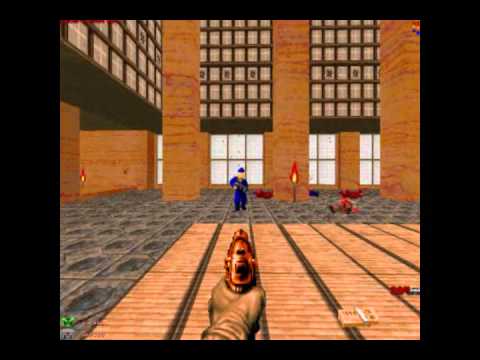 It's the speediest first-person shooter the world has ever known

Think your precious Call of Duty is fast? OK, it is pretty fast. But Doom is faster. No joke. Moving your Space Marine about the game world feels less like you're controlling a human outfitted with heavy-duty, futuristic armor, and more like you're operating a diminutive but still plucky Car2Go rental.

The Space Marine even has his own built-in momentum. Take your hands off the controls while playing and watch as he (you) slows to a stop. See?

Because of that speed and momentum, Deathmatching before bedtime back in the early '90s was a big no-no. A deathmatch before bed meant you probably weren't sleeping that night. Your heart would pound, adrenaline would start to flow... Next stop: dawn, you idiot. We've told you about a million times not to deathmatch before bed. You don't listen. 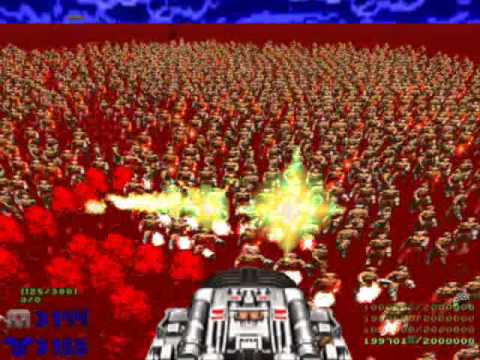 It had unforgettably badass enemies

What looks like a post-Three Mile Island Porky Pig and honks like the 18-wheeler in Duel? Those would be Demons. They're one of Doom's common enemies. They 1. run up to you and 2. bite and gnaw at your virtual face. The Doom instruction manual formally described Demons as "sorta like a shaved gorilla, except with horns." A shaved gorilla? Except with horns? Those playful words prove that ID Software had a pretty healthy sense of humor about what they were making while they were making it.

... that fought against other enemies in the game

It's really a joy to watch. Viable strategy: to move around a group of enemies in a circular pattern -- clockwise, counter-clockwise, that's up to you -- and let their own crossfires hit each other. If a Hell Baron gets hit by a stray fireball from a Cacodemon, the Baron 1. immediately stops pursuing you, 2. immediately turns around, and 3. immediately begins pursuing the Cacodemon.

Entertaining? Hell yeah. Why more games don't feature enemies that naturally fight each other is a complete mystery. This watchable infighting also gives Doom an uncelebrated cerebral quality. Because the question on your mind as you play is the same exact question that's presumably on Kris Jenner's mind in every episode of Keeping Up with the Kardashians: "How can I get these halfwit jackasses to destroy each other?" 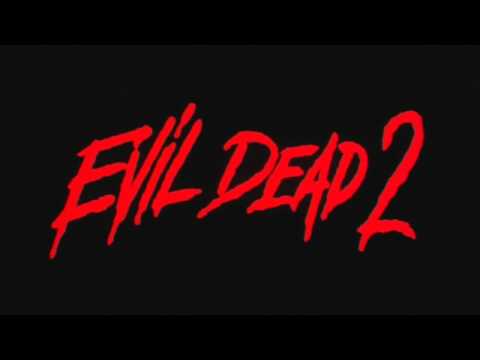 These two movies were worshipped around the ID Software offices. Both featured plenty of violence -- beheadings, eviscerations, chest burstings, etc. -- yet still somehow maintained a buoyant comic-book touch. If an eyeball pops out of a monster's head, that's gross and upsetting. However, if the eyeball takes flight and soars? And then unexpectedly lands in someone's mouth? Well, now! We're moving in an entirely new direction, aren't we? That's the direction that ID Software was going for. 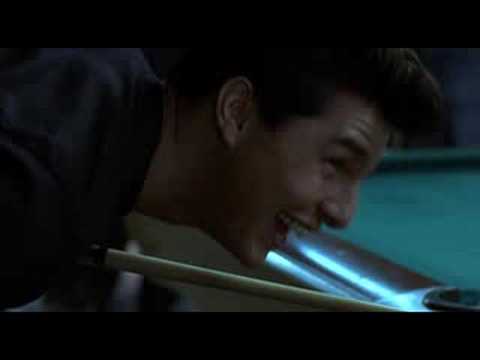 ... with an unexpected dash of The Color of Money

In the 1986 movie, Vince (Tom Cruise) has just finished witnessing a pool shark completely dismantle a hapless sucker. Once he's finished with the sucker, the shark asks Vince what he's got inside the case he's holding in his lap. Vince caresses the case lovingly. "In here?" he says. Then he opens it and delivers his answer. You half expect a Tex Avery-style tongue to unspool from Cruise's mouth in this moment.

Look at Iron Maiden's album Killers, featuring "Eddie the Head" (Eddie looks like a cartoon of Pam Anderson). Look at Pantera's Vulgar Display of Power, with that fist smashing in a face. Or look at Venom's Welcome to Hell. Or the cover for Metallica's single "One."

There's also Megadeth's Peace Sells… But Who's Buying?, showing Megadeth's mascot, "Ed Repka." Ed is the sunglasses-wearing skeleton leaning over a For Sale, sign while standing in front of what appears to be the United Nations.

The next time you find yourself in a tattoo parlor, say, "All heavy metal album covers are really the offspring of the famous triptych by Hieronymus Bosch called The Garden of Earthly Delights. Thus, I've connected the 20th-century Doom to a 16th-century Dutch painting." And lo, let my savage beating commence now.

But back in 1993? Doom scared the oaky, buttery chardonnay straight out of even the most progressive of parents.

Aside from occasional egghead games like Civilization, back then, video games still belonged to kids. They were designed for kids, and they were usually built by adults who still acted like kids. Bright colors, cartoony graphics, playful aesthetics, coins, turtles, etc. 1988's Super Mario Bros. 3-cartridge, for example, sold a jaw-dropping 17 million copies.

Then Doom showed up and crashed the in-progress kiddie party: it upended the punch bowl, ripped down the crepe paper, and delivered a Chuck Norris-style roundhouse to the clown's rainbow wig.

ID Software initially wondered (i.e., worried) if they could get away with what they were getting away with in Doom -- the blood, the gore, the shotguns, the pentagrams, the whole nine yards. Then Doom's sales went through the fucking roof. Then sales went through a dozen more fucking roofs. And everyone stripped naked, stuffed cigars in the corners of their mouths, and dove into their piles of money. 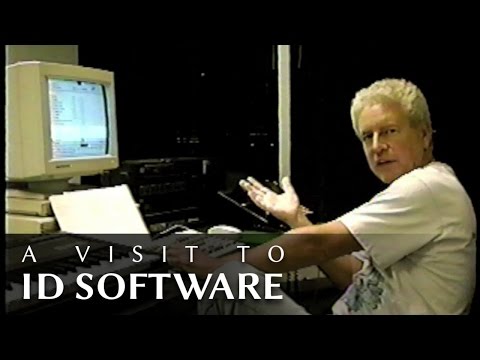 It's all a little prosaic, isn't it? Too many fax machines, too many bare walls… Wait! A foosball table! That's kind of cool, I guess. And, what's that? Is that a pool table with RED FELT ON IT? It is. This was recorded in November of 1993, so this is literally ID Software at the 11th hour before it became a certifiable holy place in the game/tech realms.

It's still relevant... but not for the violence or devil worship

The game's mechanics are superb. No joke -- they are bang-on. The act of aiming and shooting in Doom feels satisfying on a primal level -- akin to threading a needle, or rolling a bowling ball for a strike, or building a fire on a camping trip.

You can feel the craft that went into making sure that every bullet has an impact. You develop instincts as you play, and you rely on those honed instincts the further you delve into the game. 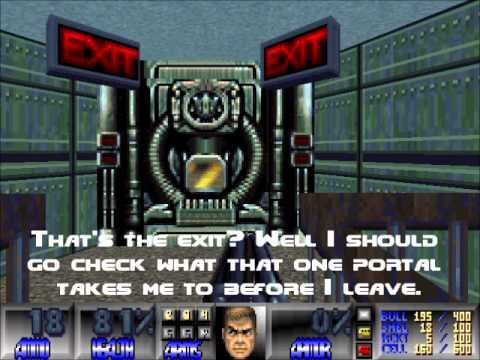 Doom was so permeable, gamers left their own fingerprints on it

Part of Doom's success was thanks to the "shareware" business model. Instead of making gamers pay for the whole game upfront, which is what Nintendo was doing with its cartridges at the time, the shareware model gave gamers one third of the game for free. Then, assuming that the first third of the game was good enough, gamers would fork over the rest of the dollars for the remaining levels.

Not only was Doom shareable, it was also fairly easy to customize. Casual programmer types could reorganize or reshuffle already existing levels, or they could build entirely new levels. Creating what became known as "Doom WADS," a community of armchair game designers fed a steady stream of imaginative, homebrewed Doom levels to the Doom community. Some of the most popular Doom WADS of all time are homages to Star Wars, Ghostbusters, Super Mario Bros., The Simpsons, and Tomb Raider.

John Romero, one half of the Johns credited with building Doom (Carmack is the other one), recently built his first Doom WAD in decades.

Doom is pretty much the reason the ESRB exists

Twelve months after its release, the Entertainment Software Rating Board came kicking and screaming into the world. The ESRB would henceforth regulate games the same way that the MPAA regulates movies. After Doom, and with an assist from 1992's Mortal Kombat (also grim and playful), the chardonnay-drinking parents decided that if their precious kids were going to be driving down this godforsaken roadway, then by gawd, they were going to have to install some damn guardrails.

It's still blamed for most bad things that happen

Whenever something awful goes down, no matter if it's a shooting spree or a terrorist act, a suicide or bullying, the first thing that investigators usually do is check the assailant's hard drive to see if that sick, twisted fuck played any Doom. The investigation goes something like this:  "He loved Doom. Case closed, folks."

The truth is that, like Tetris, everyone plays Doom at some point in their life. Doom has been so ubiquitous for so many years that you practically have to have been locked in Kimmy Schmidt's bunker not to inadvertently wind up with a copy of Doom on your hard drive.

The Columbine shooters, Harris and Klebold, who killed 12 students and one teacher before committing suicide in 1999, supposedly rehearsed their attack by playing Doom. Some Columbine victims even sued ID Software and GT Interactive (Doom's publisher), but they were ultimately unsuccessful.

Bad things, sadly, will continue to happen. And we won't always be able to explain why these things happen. For the past 23 years, Doom has served as an all-purpose, easy-to-point-at scapegoat, a convenient, media-friendly way to explain what we can't otherwise explain to one another.

It was a really fun shared experience to riff on

In grad school, when I should have been studying or preparing lesson plans, I'd play Doom with my friend John. We'd even invent game-like scenarios when we weren't playing, in which all the monsters in Doom would have town-hall-style meetings to lodge complaints.

"SOMEONE IS STILL LEAVING STRAY SHOTGUN SHELLS ALL OVER THE FLOOR IN THE TOXIC REFINERY. WHOEVER IS DOING THIS, PLEASE STOP. WE HAVE A GUY DOWN HERE WHO IS TRYING TO KILL US. THOSE SHELLS ARE HELPING THAT GUY!" Then we'd both double over with laughter.

"ALSO, SOMEONE IS LEAVING LARGE HEALTH PACKS ALL OVER SLOUGH OF DESPAIR. WE FOUND LARGE ONES, AND WE ALSO FOUND SMALL ONES. USUALLY THEY ARE IN THE CORNERS. WHOEVER IS LEAVING THESE HEALTH PACKS AROUND, STOP IMMEDIATELY. THANK YOU."

Then we'd go back to playing Doom. Those were the days, man.

Scott Jones is a writer and TV host based in Vancouver, BC. He has written for USA Today, Esquire, and Playboy, among others. He is busy at this moment polishing his BFG, even though doctors have told him that BFG-polishing more than once a day isn’t necessarily good for him. You can find out more about him at his website or follow him on Twitter.