'Duets' Is the One True Karaoke Movie, For Better or Worse

The Gwyneth Paltrow vehicle is part of that canon of films that makes you wonder, "How the hell was this allowed to be made?"

Cast your mind back, if you can, to the year 2000. The dawn of a new millennium: we had escaped the perils of Y2K unscathed, the internet was a place of untold potential, you could make and release a musical comedy about a popular new trend sweeping the nation called "karaoke" and have that movie end with one of the main characters committing suicide by cop by pulling a gun out onstage after singing "Freebird."

Directed by Bruce Paltrow, who before Duets was best known for the television hit St. Elsewhere, and starring an absolutely bizarre cast including his daughter Gwyneth Paltrow, pre-Sideways famous Paul Giamatti, and Huey Lewis (yes, that Huey Lewis), Duets belongs in the canon of films that force you to stop and say aloud to anyone in the room with you, "How the fuck did this get made?" One of the last delightfully bad movies to be released before 9/11 happened and all we got for years was gritty superhero shit or archly bantering superhero shit. I love it a great deal.

Duets follows six characters all making their way to the National Karaoke Competition in Omaha, Nebraska by way of smaller, qualifying competitions held in seemingly every dive bar in every town across America. Maria Bello plays a sort of manic pixie sex worker who hitches a ride with Scott Speedman, an almost-priest-turned-cabbie; Paul Giamatti abandons his suburban life of drudgery and corporate job to get one ear pierced, do a frankly anxiety-inducing amount of drunk driving, and bond with ex-con Andre Braugher, who teaches him important lessons before dying in the above-mentioned fashion. Huey Lewis is a karaoke hustler (like a pool shark who lulls people into betting money that he can't sing by wearing a pair of fake glasses, like Clark Kent) reunited for the first time with his adult daughter, Gwyneth Paltrow, who has the voice of a sex pot and the mind of a child. If you remember this movie at all it's likely because their performance of Smoky Robinson's "Cruisin'" became a bona fide radio hit. 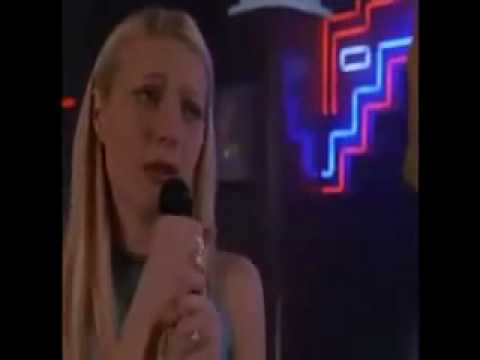 While the film contains many elements of other, much better movies -- part road trip comedy, part exploration of unlikely pairings, part "amateur talents trying to make it to the big show" narrative -- it combines them in such absurd, unexpected, and frankly unbalanced ways as to never quite let you settle into knowing where any of this is going. One minute, Gwyneth Paltrow is trying to earn her father's affection with a pouty rendition of "Bette Davis Eyes," and the next Paul Giamatti is holding up a convenience store. Famously, Disney forced Bruce Paltrow to cut 15 minutes of graphic gun violence in order to meet their distribution standards, which tells you everything you need to know about the wild tonal shifts in this fun little romp about amateur singing. If I was feeling charitable, I would credit the filmmakers for managing to reproduce one of the purest joys of a night out doing karaoke: the sense that anyone can get up onstage and astonish you with something atrocious, or something beautiful.

I remember once being in a karaoke bar in Brooklyn shortly after Prince died, when a middle-aged man wearing khakis got up and the screen behind him flashed the words "Purple Rain." You could feel everyone in the room tense at once, dreading what was sure to be a failed attempt. I considered going outside for a cigarette rather than bear witness to something that verged on disrespect. Then the man started to sing, and it was like watching someone break the laws of physics in front of you -- a kind of blank refusal to process what is happening before submitting in awe. As this khaki-wearing man kept effortlessly hitting note after note, everyone started looking around to confirm it was happening, that we were all seeing and hearing it. There was not a dry eye in the house.

I used to work in a bar that had karaoke five nights a week. I have seen men built like lumberjacks sing Taylor Swift songs with unbridled joy and passion. I watched a middle-aged woman and a dirtbag college kid from the table next to hers get up and do the George Jones/Tammy Wynette classic "Golden Ring" with so much pathos you would have sworn they had been through a ruinous divorce. That kind of serendipity is what made working in a bar that had karaoke five a nights week worth it. The scene where Giamatti, mid-nervous breakdown and high on karaoke (as well as drugs, to be clear he is also high on a whole lot of drugs), begs this newly acquired friend to get up on stage together since it's a duets night captures that feeling better than anything else I've seen on screen.

Of course, those moments are very rare. While karaoke can, very occasionally, fill you with wonder and delight, mostly it's at best diverting, and sometimes it is excruciating. Same goes for this weird movie about lonely, alienated people traveling across lonely, alienated parts of the country in order to chase that fleeting feeling that they might, for a few minutes, do something transcendent.

Is Duets a good movie? No, it most certainly is not. In truth it's not even really a bad movie so bonkers it becomes good again, like Showgirls or other cult hits. But since none of us are going to be able to actually go do karaoke out in public anytime soon, it's worth watching. If only to remember a simpler time, when the idea of getting up on stage to sing for strangers was new and fascinating, and Gwyneth Paltrow was a charming ingenue instead of the Goop lady partly responsible for fueling the anti-vax movement.

Brandy Jensen lives in New Orleans with her two dogs.