For 3D Animation, Studio Ghibli's 'Earwig and the Witch' Is Nothing but Flat

The movie's computer-generated animation is the best case yet for keeping the process hand-drawn.

There's a reason Japanese animation studio Studio Ghibli is known as one of the last champions of hand-drawn animation long after the Western world turned their attention to CG: They're damn good at it. Ghibli's films, most of their very best directed by the legendary Hayao Miyazaki, are alive with color and movement, the kind of movies whose tiniest moments—raindrops falling on a sidewalk, fields of grass moving in a breeze, a character flipping their hair or slicing food—can be rewatched over and over again. It was weird, then, that director Gorō Miyazaki, Hayao Miyazaki's son, chose to use the studio to make his latest movie, Earwig and the Witch, entirely in 3D computer-generated animation—a first for Studio Ghibli, and, hopefully, the last.

Earwig and the Witch (released earlier this week in theaters and available now in HBO Max) is the story of young orphan girl Earwig, dubbed Erica Wigg by the orphanage's staff and Āya in the Japanese version, a precocious child whose rigid pigtails evoke the pincers of her namesake and who basically runs the place with her young friend Custard. When she's adopted by a blue-haired witch named Bella Yaga and her Nosferatu-sized housemate the Mandrake, Earwig is dismayed to learn that the witch has no intentions to teach her magic, and plans to simply use her as an assistant for her spells. With the help of Bella Yaga's talking black cat familiar Thomas, Earwig vows to learn how to charm Bella Yaga and the Mandrake into doing her bidding. 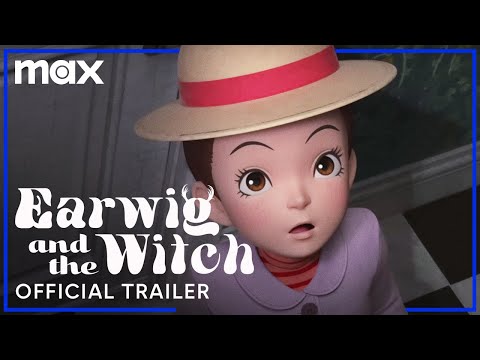 The story is mostly fine, based on a children's book by fantasy author Diana Wynne Jones (the second Ghibli film to be based on her work, after Howl's Moving Castle). There's a B-narrative about a broken-up rock band that muddies the waters a bit, whose reveals are sloppily obvious and yet simultaneously downright confusing for younger viewers. The whole thing is soundtracked by bland rock music composed by Satoshi Takebe, who also wrote the score for Gorō Miyazaki's From Up on Poppy Hill, and includes a couple of nice enough original songs. Gorō even mentioned in an interview with The Verge that he was able to pretty much have free reign on this project, since his father was busy working on How Do You Live?, the labor-intensive movie that brought him out of retirement and requires one month of work for every minute of footage: "It was like me hiding in the garage without people noticing what I was doing."

The animation is where Earwig and the Witch goes from forgettable to downright embarrassing. Unlike Studio Ghibli's previous films, this one is done entirely in computer-generated 3D animation, and yet looks totally lifeless. Ghibli fans were dreading this movie even before it came out, based solely on how it looks. There's a strange, sporadic sense of detail: The backgrounds and prop objects look almost photorealistic, and every character in frame appears to be breathing even if they're standing still. But all the characters look totally flat, no matter how exaggerated the shading is on their faces or wild hairdos. The hair in particular is something to behold, but it looks hard, like plastic, or something that's been extruded through a Play-Doh toy. Even the colors are drab.

It's as if the attention was paid to all the wrong things—one denim jumper Earwig wears in a few scenes genuinely looks like real fabric, but it moves like a paper bag, as do all the other clothes in the movie. The whole enterprise feels unfinished and rushed, especially when compared to (and it's impossible not to) everything else Studio Ghibli has produced. To twist the knife, the closing credits of the movie include absolutely enchanting sketches of Earwig and the other characters in the movie, dangling what could have been right in our faces.

This isn't Gorō Miyazaki's first film for Studio Ghibli, but it is by far his worst, surpassing even the generally derided Tales from Earthsea, a loose, whitewashed adaptation of Ursula K. Le Guin's groundbreaking fantasy series that the author has completely disowned. Even Hayao Miyazaki walked out after the first hour during a screening to have a cigarette, but later finished the film, and told Gorō, "It was made honestly, so it was good." (Though not before delivering the devastating own, "It's good that he made one movie. With that, he should stop.") His second effort, in contrast, 2011's boarding house-set drama From Up on Poppy Hill, is quite good! It's clear that Gorō genuinely wants to follow in his father's footsteps, but, clearly, this is not the way to do it.