Elite, the Spanish-language teen crime drama that recently hit Netflix, has been compared to some of the top twisty teen soaps of the past decade. The comparisons are apt; for a show that had little pre-release marketing, the online buzz that blew up over its gossipy high school drama led to its second season pickup barely two weeks after the lean eight-episode first season landed on the streaming service.

Elite might be the only show that could give Riverdale a run for its money when it comes to excessive slow-motion shots. Like Gossip Girl, it’s set in an exclusive private school where social currency is determined by wealth, sex, power, and following the script. A student-teacher blackmail subplot screams Pretty Little Liars. It has shades of How To Get Away With Murder, too, jumping between two timelines to unfurl its central murder mystery. (It even shares a murder weapon in common with the Shondaland thriller’s first season.) On the surface, those parallels are obvious. But whereas these mile-a-minute dramas twist and turn so much, often spinning multiple mysteries at once, Elite actually manages to exercise impressive restraint when it comes to its central murder mystery. It’s more slow crime than murder thriller. 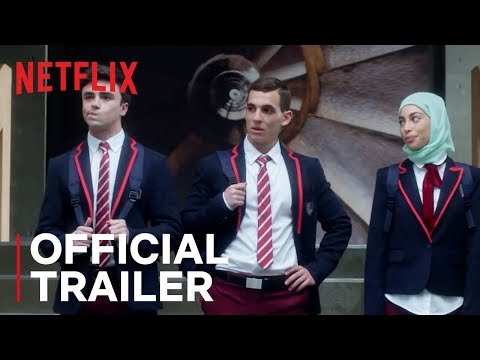 For all its stylization, camp, and indulgence (just watch the trailer), Elite is strikingly grounded in its storytelling. It begins with the arrival of three outsiders to the "fancyland" of Las Encinas private school: Samuel (Itzan Escamilla), a sensitive boy who works as a waiter to support himself and his single mother; Christian (Miguel Herrán), a cocky and effervescent firestarter; and Nadia (Mina El Hammani), a smart but guarded always-does-the-right-thing daughter who is othered even more than Samuel and Christian because of her Muslim faith and Palestinian roots.

The arrival of the new kids sparks controversy, especially at the top of the social pecking order, where classic rich bully Guzmán (Miguel Bernardeau) stokes the flames, urging his inner circle to hate and torment the new students who, as it turns out, received scholarships to attend Las Encinas because their own school’s roof collapsed. The crooked developer responsible? Guzmán’s father.

The controversy of the collapsed roof and the dark cover-up surrounding it provides the narrative backbone for Elite’s murder mystery. Samuel’s bad boy brother Nano (Jaime Lorente) gets out of jail and immediately starts stirring up trouble, wanting to expose the rich and powerful for the ways they take advantage of the less fortunate and extort them for their wealth since he owes some very bad guys money.

Meanwhile, someone is dead. By the end of the first episode, it’s revealed who that someone is, and from then on, the real mystery is who did it. Elite has no problem being over-the-top at times, often with very fun results. But structurally, it has a lot in common with a slow-paced noir like Big Little Lies -- police interrogation scenes serving as interstitials amid the build-up to the murder -- or even The Night Of. At eight, 45-ish minute episodes, it’s a tightly executed thriller. By the end, the culprit really could be anyone, every central character possessing a compelling motive for the crime. Elite doesn’t fall into the same trap How To Get Away With Murder and Riverdale both have in the past where character development and consistent writing are sometimes sacrificed for the sake of selling a twist. Each of the students on Elite have clear and consistent perspectives, motivations, and psychological underpinnings. Their actions make sense, even when -- especially when -- they fuck up.

While the murder hook is what makes Elite instantly bingeable, it’s the character development that elevates it into more than just a weekend activity. The characters quickly transcend their respective stocktypes, sometimes in admittedly predictable ways: the jerk falls for the good girl and vice versa, the queen bee is insecure, the bad boys are secretly sensitive.

But even within these tropes, Elite finds nuances and grounded character work. There’s a strikingly well written coming-of-age romance between two gay boys. What starts as a game between calculating cool girl Carla (Ester Expósito) and her longtime, pushover boyfriend Polo (Álvaro Rico) soon becomes a much more complicated and fascinating triad relationship between them and Christian that takes many turns. Even the sex scenes -- and there are a lot -- are more than just lusty, indulgent fun. There’s so much under the surface.

As with any teen soap, there’s plenty of romance, but on the relationship front, the friendship and sibling dynamics stand out in particular, feeling real and carefully thought out. Samuel and Nano are constantly in a back-and-forth, fiercely loyal to and loving of each other but also at odds, especially when it comes to Nano’s criminal activities. Closeted tennis player Ander (Arón Piper) struggles to come out to his best friend, even though he’s ultimately supportive. And the strong character development is backed by strong performances from young actors with range. Bernardeau brings depth to Guzmán, and El Hammani is powerful in all of Nadia’s most emotional scenes. Expósito understands exactly what makes Carla such a fun, alluring character.

Despite the fancy events where glammed-up teens drink and party with luxury, Elite isn’t as reminiscent of Gossip Girl as it is The O.C., which similarly, was sharp and layered in its depiction of the conflict that class structures breeds among teens. Rebellious Marina (María Pedraza), Guzmán’s little sister, is caught between the two brothers and also between the two worlds, born into the rich and powerful but more empathetic to the new kids at school than any of her peers, feeling out-of-place at her own debutante party, constantly falling in love with boys her family doesn’t approve of. Elite is gritty in its portrayal of class tension. Marina refuses to fit into the binary world of Las Encinas, and she’s ultimately punished for it.

As Netflix continues on its all-in approach with genre films and series, the Spanish soap is likely to be lumped in with more problematic American originals focused on teen hardship, like 13 Reasons Why, or even Insatiable. But Elite, full of nuance in its discussions about class, privilege, and sexuality, doesn't have to be relegated to yet another guilty pleasure. Just, please: Watch it with subtitles.