The man who directed the Oscars just stole the show at the Emmys. In all fairness, Outstanding Directing For A Variety Special was not one of the most anticipated categories of the night, but Glenn Weiss changed all that. He won for the Oscars telecast, sure, but his work on the other awards show wasn't really the focus of his speech. Instead, he went ahead and proposed to his girlfriend Jan Svendsen on live television. 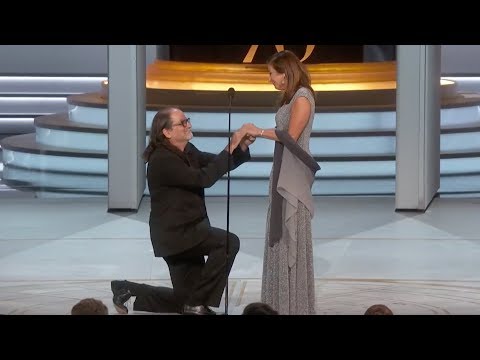 Weiss began on a sad note, talking about his mother who died two weeks ago. "She adored my girlfriend Jan," he said. "Jan you are the sunshine in my life. And mom was right, don't ever let go of your sunshine." And then it got crazy. He continued: "You wonder why I don't like to call you my girlfriend, because I want to call you my wife." The crowd lost its shit. Leslie Jones looked astonished. Benedict Cumberbatch cheered.

Once Svendsen took the stage Weiss brought out the ring his father gave to his mother, and he completed the proposal by getting down on one knee. They kissed! It was adorable!

The proposal was a continued topic of discussion during the ceremony. When Matthew Rhys won for acting in The Americans, he said his partner and co-star Keri Russell told him that she would "punch [him] clean in the mouth" if he proposed.

By the way, this is Weiss' 14th Emmy. Svendsen used to work as the chief marketing officer of the Broadway League and the Tony Awards.