Euron Greyjoy Might Be the Key to Winning 'Game of Thrones'

Euron Greyjoy -- who became king of the Iron Islands on this week's Game of Thrones -- is, for lack of a better term, crazy as fuck. Imagine that batshit uncle from your mom’s side who lives in the Florida Keys as a spearfish instructor, and then combine him with a Viking, several pirates, and Brad Pitt from Legends of the Fall during his walkabout opium years, and you've got a pretty good idea of just what Theon and Yara are dealing with here.

But unlike most crazy uncles who murder their brothers in a bold attempt to consolidate power, Euron actually has the skills and savvy to do the seemingly impossible: make viewers start caring about those water-logged marauders of the Iron Islands. Not only is he cunning, having devised the plan to destroy the Lannisters' ships during the Greyjoy Rebellion (which took place nine years prior to the events in Game of Thrones and is the reason Theon became a ward of the Starks) but he won the kingsmoot thanks to a damn ambitious plan.

That plan, and King Euron himself, bear closer examination, since the Ironborn will play a potentially pivotal role this season, whether you like it or not, because that is the goddamn Iron way.

As far as I can tell, a kingsmoot is essentially the combination of a political convention and the rap battle scenes from 8 Mile, with the person who has the most clever insults and gets onlookers to chant the loudest ending up as the leader. Euron, friends, is B. Rabbit. After dispatching Theon by patting him on the cheek condescendingly, breaking down what his nephew had messed up Cheddar Bob-style, and using the Greyjoy formerly known as Reek's lack of private parts as the explanation for throwing his support behind a woman, Euron faces off against the much more formidable Yara, aka Papa Doc.

But when she accuses him of murdering her father, Euron flips the script. Rather than deny the charge, he embraces it, and then breaks down all of the reasons killing his brother Balon was a fantastic idea. On Pyke, paying the iron price is the ultimate rationale for any murderous seizure of something that isn't yours, so the others are into this.

And when Yara unveils her own plan to build the biggest fleet the world has ever known, Euron shows even more political savvy. He agrees with his niece's plan, but argues that he should be the one to build and lead it because he’s been all around the world, seen all sorts of cool kinds of nutmeg no one else has, and knows what to do with said fleet. And that's when he breaks down the master plan: sail over to Daenerys and convince her to join forces with them to take the Seven Kingdoms. He also mentions his penis, just to be a jerk to Theon and Yara.

When Yara questions his ability to seduce the Mother of Dragons, he drops some Bismarckian realpolitik. "I'm not going to seduce her," he says. "The Iron fleet will seduce her." And then he drops the ultimate closer: "I wasn't born to be king. I paid the iron price, and here I stand." Yara and Theon might as well have gone to Cranbrook at that point.

Once Euron's won the 'moot, his brother Aeron -- essentially the high Drowned Man of the Ironborn's Drowned God religion, thanks to having nearly drowned himself -- performs the ritual to make a new king, which obviously also involves drowning said king and hoping he comes back to life. But as Euron nearly drowns, Theon and Yara and the people loyal to them escape on their people's best ships and sail off. Euron isn't worried, because crazy people don't worry, so he just makes the reasonable request of building a thousand new ships with the promise of giving the Ironborn the world.

This essentially leaves us with two questions, one immediate and one for the future.

Where are Theon and Yara heading with those ships?

Since Theon and Yara know of Euron's plan of asking Daenerys to team up with them, their boldest move might be to go to Meereen themselves and work out their own deal with the Mother of Dragons. And thanks to the eventful pre-season trailer, we know that Yara plays kissy-face with a female slave, so it seems logical to assume that she and her brother are heading in that direction. Unfortunately, Daenerys is still busy being extremely Dothraki, so this plan might mean a group hang with Varys and Tyrion just as Meereen and the rest of Slaver's Bay begin to descend into chaos.

In the books, which are no longer as relevant to show storylines as they once were, Euron's cuckolded brother Victarion heads over to Meereen on behalf of the Ironborn with the team-up offer for Daenerys. Since the show seems to have elided the Victarion character altogether and Theon didn't make it to the kingsmoot in the books, could Theon be taking over that storyline? If so, he and Yara are indeed on their way to Meereen... and make it there just in time for war to break out there.

But considering how far Meereen is from the Sunset Sea and the strong likelihood that a plan involving dragons won't pan out, maybe Theon and Yara are heading to Braavos instead? It seems like such a lovely place, filled as it is with face-changing assassins, bawdy sketch-comedy troupes, and virtually zero annoying uncles. While this scenario is admittedly unlikely, a girl named Arya has to get back to Westeros somehow, right? And if anyone kills Theon, we hope it's a Stark. 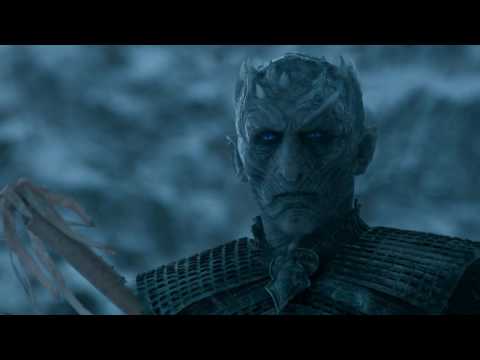 Could Euron's plan to unite with Daenerys actually work?

Let's assume I'm wrong about where Theon and Yara are heading, and they're actually just going to take menial jobs aboard a Dornish cruise ship, and Euron gets his chance to pitch his fleet idea to Daenerys, things could get very interesting/nerdy.

For instance, if the Mother of Dragons truly is Azor Ahai, aka The One Who Was Promised, as Kinvara, the high priestess of the Red Temple of Volantis, claimed she was to Tyrion and Varys, that prophecy speaks of TOWWP's return via "salt and smoke." Well, the Ironborn are figuratively the saltiest bastards ever, both in terms of their bodacious attitudes and their enjoyment of a sea-faring lifestyle. And Euron and Daenerys both just went through a rebirth of sorts -- one by salt water and the other by fire. Maybe that's something!

Also, Daenerys is now in charge of the Dothraki, a people who think that salt water is poison because horses can't drink it and won't cross the sea. That has to be setting us up for a Narrow Sea crossing, right? The Dothraki and the Ironborn are much more alike than one might think, considering they earn respect by taking things (e.g., horses, ships, lives) from weaker individuals and are generally just into taking the piss out of everyone.

A combination Dothraki-Ironborn army is a scary prospect to think about, and seeing a bunch of Dothraki horse lords riding their steeds off of Ironborn ships, possibly with their long braids intertwined with seaweed, would likely cause every lord in Westeros to send out all their emergency ravens simultaneously, thus clogging the raven airways, and causing a massive raven outage. And this is before they see Dany's dragons.

Then again, Euron is a dick, one who is rumored to have learned black magic from torturing warlocks in Qarth (a possible reason he looks so much younger than Balon and Aeron). I’m not sure if the Mother of Dragons would enjoy being reminded about the place where she was imprisoned and nearly killed by a creepy warlock assassin. And if it comes down to Ironborn vs. Stormborn, I know where I'm putting my money.

Check out all the latest Game of Thrones Season 6 photos that tease the next episode.