Where Is Evan Peters on 'American Horror Story' Season 6?

Update: American Horror Story: Roanoke finally revealed Evan Peters' character! And the theories weren't too far off. Read on for our original post below.

American Horror Story: Roanoke boasts an abundance of oddballs, from Kathy Bates' crazed Butcher and Lady Gaga's soul-hungry wood witch, to Denis O'Hare's kooky professor and Leslie Jordan's Coke Zero-loving medium. One fan-favorite actor, however, has noticeably been hiding, four weeks and counting: where in the world is Evan Peters?

Though Peters hasn't appeared onscreen in an obvious manner, that hasn't stopped fans from speculating. Some swear he's the guy wearing the pig mask (this porcine Instagram might agree with that). There's another rumor that has the 29-year-old playing Edward Phillipe Mott, Dandy's relative mentioned in last night's episode. And there's even a Pig-Mott combo theory.

But to which character would those shoulders belong? Piggy Man? Or someone -- something -- else?

Others still have wondered if Peters is one of the guys helping the camera crew, or if he's somehow tied to Lady Gaga's character:

That last idea is particularly interesting, considering the twist promised in Episode 6. We've already seen Gaga and Matt (André Holland, Cuba Gooding Jr.) engaged in a couple spooky sex acts. It's clear Gaga wants something from Matt -- likely not just him. So is there a chance their offspring could be some sort of Antichrist? An Antichrist played by Peters?

Peters has been cagey about Roanoke. During a recent Conan visit (see below), his interview was more about his balls than his role. On social media, aside from that pig picture, he's been all about sharing this shirt that has his face on it. (Stay weird.) And the actor mostly said "I don't know" when The Wrap spoke to him about the FX anthology at the end of summer -- though he did let slip that he dyed his hair red for this season. ("I’m trying to figure out if I can say," he said. "Yes, I didn’t do this to my hair.") 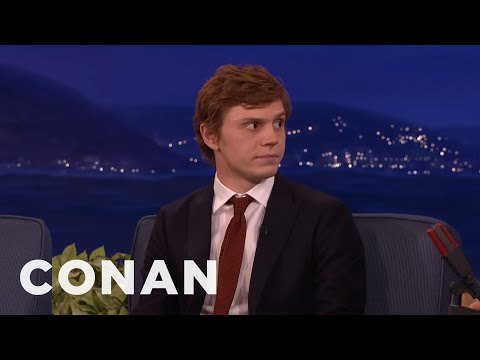 The silver lining? He is in Roanoke. He confirmed that, and he's credited for every episode -- either meaning we've been watching him this whole time and haven't noticed, or the show is going red-herring-crazy. Antichrist? Pig-Mott? Someone else? With a monster twist two weeks away, here's hoping we find AHS's Carmen Sandiego soon.

Sean Fitz-Gerald is a staff writer at Thrillist Entertainment and hopes Evan has learned his lesson. Find him on Twitter: @srkfitzgerald.