There's no need to go to the moon when you've got a giant vault to swing around.

The Fast and Furious franchise—which now encompasses eight movies, a spin-off featuring the Rock and Jason Statham, and a Netflix animated show for kids, with the long-delayed F9 finally hitting theaters this June—has humble origins. The series started with 2001's The Fast and the Furious, a Point Break riff that swiped its title from a Roger Corman–produced '50s B-movie and drew inspiration from an investigative feature on street-racing published in the pages of Vibe magazine. Most importantly, it began with Vin Diesel and pals boosting electronics from a truck.

Whenever a new trailer or bit of information drops about F9, I'll usually see a tweet or a link to an old Reddit thread where someone jokes about the series having started with the theft of DVD players (note: they were actually VHS players) and now it seems likely that they'll zoom to the moon. Admittedly, it is funny to think about the current version of Diesel's Dominic Toretto—a globe-hopping, hacker-thwarting, family-worshipping super-spy—getting his start by stealing home video equipment you might use to watch a scratched tape of The Matrix or The Cell. Those early days bring a degree of charm to the sense of one-upmanship the visual effects and stunt teams are currently engaged in, connecting the franchise to a particular time and place, specifically Los Angeles in the early 2000s.

Now, 10 years from its release on April 29, 2011, Fast Five serves as an even more significant turning point in the series. From a big-picture perspective, Fast Five transformed the franchise into what it is today: After the surprise success of 2009's Fast and Furious, which re-assembled the original's core cast of Diesel, Paul Walker, Michelle Rodriguez, and Jordana Brewster after 2003's Walker-centric semi-sequel and 2006's Tokyo Drift that featured a Diesel cameo, director Justin Lin and writer Chris Morgan pushed the movies into new territory. They did this by bringing in the Rock to do Tommy Lee Jones slathered in baby oil as DSS agent Luke Hobbs, emphasizing the Ocean's Eleven-like heist elements, and really leaning into absurd, destruction-filled action sequences. I'm talking about the vault heist that takes up most of the final stretch of the movie. 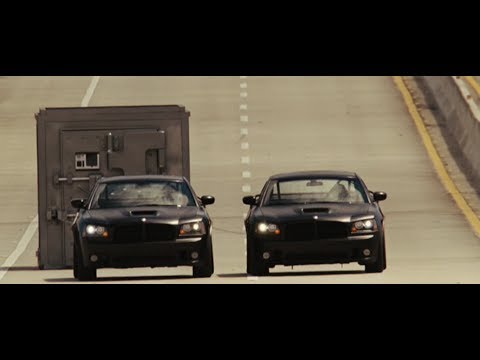 On both a technical and thematic level, the vault heist cracked open what a Fast and Furious movie could be, while also staying true to the vaguely defined outlaw spirit of the original. The true villain of Fast Five is Brazilian business tycoon and drug lord Hernan Reyes (Joaquim de Almeida), who falls into the Fast family's crosshairs after they're recruited to steal a car for him in the movie's tense opening train heist. Improbably, the car contains a microchip (always the microchip!) that holds all the details of Reyes' criminal enterprise, including the locations where he keeps his money. After Dom and friends burn up the money in one of Reyes' stash houses, the kingpin moves all his millions to a giant vault in a secure location, a fortress-like police station in Rio de Janeiro.

As Ludacris' hacker gearhead Tej reminds everyone in one of the movie's funniest asides, this is not the most straight-forward job. "We're talking about breaking into a police station," he tells the crew, which includes fellow 2 Fast 2 Furious cast member Tyrese Gibson, Fast franchise newcomer Gal Gadot, and Tokyo Drift's cool-headed Han, played by fan favorite Sung Kang. "Is anyone listening to those words? Anybody? Po-po? Five-0? One time? Pigs? People we don't like." (Perhaps, tellingly, the full aside is not in the version of the script for the movie you can find online.)

Though the movie takes great pains to stress how corrupt the police in the movie are—and the team draws in federal agent Hobbs, motivated by revenge after his men are killed in one of the movie's many shoot-outs, to pull off the heist—there is a mildly transgressive charge to the images of Dom and Walker's ex-cop Brian O'Connor taking out so many cop cars. The vault, tumbling through the streets of Rio like an enormous steel Rubik's Cube, gets used like a yo-yo, a battering ram, and slingshot. Despite the high stakes of the scenario and the destruction—at one point they completely level a bank, another symbol of state power—Brian is mostly amused with himself throughout the entire chase. In a brief close-up, director Justin Lin cuts to a child watching the vault zoom by from a bus, reminding the audience that all this death-cheating is supposed to be fun.

And it is—incredibly fun! Like Point Break, the first Fast and Furious movie was about an authority figure getting seduced by the adrenaline rush and sense of camaraderie that comes with infiltrating an underground subculture. As the movies become more about cybersecurity and melodrama, little of that remains. Many lists on the subject of what's the "best" action scene in the series will often point to Fast and Furious 6, Lin's final Fast film before agreeing to return for F9, as the high point when it comes to excitement, absurdity, and vehicular mayhem. They're not necessarily wrong: Fast and Furious 6, which contains both the tank chase and the never-ending runway sequence, is peak goofball car stuff. But the movie, which finds the crew working with Hobbs to clear their names, folds the Fast family a bit too snugly into the cold embrace of the militarized police-state. The vault heist is something different, a ridiculous reminder of the franchise's early days of thievery and freedom.