It’s been more than a year since Makoto Shinkai’s Your Name., the "ultimate missed connections movie," was released in the U.S. to resounding acclaim. Shinkai’s take on anime, with its almost supernaturally luscious visuals and a contemporary touch, struck a chord worldwide, turning it into the highest grossing anime (and eighth highest grossing traditionally animated film) of all time. It also resulted in J.J. Abrams announcing that he would produce a live-action remake of the film to be released by Paramount Pictures and Bad Robot Productions in conjunction, mercifully, with Toho, the original production company. Because live-action Western anime adaptations, you know, tend towork out great.

So it should come as a great relief to Shinkai fans that Netflix -- which has dove headlonginto anime and, yes, even live-action adaptations -- has preempted lens flare fetishist Abrams’s follow-up with a follow-up of its own: Flavors of Youth, a triptych anthology film from Shinkai’s home studio, CoMix Wave Films, and the Chinese studio Haoliners. "Told in three chapters in three cities," the official synopsis explains, "explores the simple joys of life through sensual memories and how the beating heart of love cannot be defeated by the flow of time." Romantic! Mysterious! It all sounds very Shinkai and, as such, like the perfect thing to tide fans over until the man himself is ready to put out his next feature. (Which, as it turns out, might be pretty soon.) 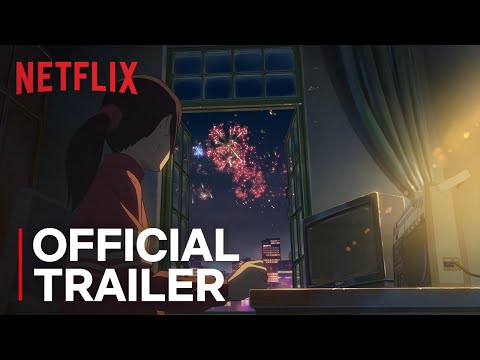 To an extent, it does. But the average fan looking for a Your Name. redux may have a few hangups. For one, there’s the anthology format. While quite popular in Japanese animation as a testing ground for young directors or as a way for studios or directors to show (or remind impatient audiences of) what they’ve got, it's certainly not a feature filled with a single, robust story arc and tidy closure. As a result, U.S. audiences might find the release a little undercooked. For another, there’s the fact that Shinkai had… nothing to do with this. Flavors of Youth’s three parts are directed by Xiaoxing Yi, Yoshitaka Takeuchi, and Haolin Li, respectively. And finally, anyone expecting anime’s trademark Japanese setting might be surprised to find that each of these shorts takes place in China.

And yet, there’s a lot to like here. China is a refreshing setting -- and, frankly, allows the gorgeous visuals CoMix is known for to sing in urban settings that aren’t simple revisitations to Shinkai’s Tokyo. (It’s also a savvy move, considering that Your Name. was the highest-grossing Japanese film in China, the world's second-largest movie market, when it debuted in 2016.) The animation is, unsurprisingly, stunning. The opening short alone during the food-focused "The Rice Noodles" manages to beat Miyazaki at his own animated food game, with the protagonist’s voiceover recalling the traditional Sanxiang noodle soups in the Hunan province -- "My memories from childhood begin at this noodle shop with no sign," its protagonist says early on -- set to what must be the most beautifully rendered food ever animated.

Perhaps the biggest collective success of Flavors of Youth is the way the wistfulness of each short remains distinct. There are at least traces of romantic love in all three, and each provides its own particular memory-soaked longings. The first is an exercise in nostalgia of place and senses, while the second, the modeling-focused "A Little Fashion Show," laments the closeness of youthful sisterhood and parents now gone. The third, the architecturally inclined "Love in Shanghai," is the most blatant romance, mourning a close childhood friendship lost while trafficking in missed connections, as Your Name. did. It’s the closest thing to Shinkai’s work fans will find here, as well as the best-constructed narrative piece of the three. It’s lovely, if a bit derivative.

The weakest of the three shorts is, sadly, the only one to center around a female protagonist, "A Little Fashion Show." It’s the one short directed by CoMix Wave’s master of 3DCG, Yoshitaka Takeuchi, which ideally would have positioned it as its best; Takeuchi was, after all, an irreplaceable part of the Your Name. team, responsible for some of the most stunning effects. And those are here, in spades, both in this short and the others -- in the delicacy of each raindrop, the rippling of water, the ripening of skies. That said, this short is one more story that succumbs to clichéd and sexist portrayals of women, and its setting in the fashion industry does not help matters.

That said, when looked at as a set of loosely-connected, beautiful, animated tone poems, Flavors of Youth succeeds. Maybe it will tide Shinkai fans over until next year. But probably they’ll just get hungry for translucent noodles in golden broth three minutes in. The good news? It’s on Netflix. Just order in before you hit play.

John Maher is a writer and editor in New York. He co-runs the animation blog The Dot and Line. Follow him on Twitter @JohnHMaher.