Out of all the anime that has managed to hit U.S. airwaves, very few shows share the same level of unbridled energy as FLCL. The seminal 2000 miniseries, pronounced "Fooly Cooly," still stands as the one of the format's best portrayals of budding adolescence and the emotional whirlwind that comes with it in scenes that pingpong between stillness and mania at a whiplash-inducing pace. The absurd exploits of despondent 12-year-old Naota Nandaba as he tries to balance family, friendship, and love in the midst of an intergalactic standoff strikes a weird balance between the relatable and ridiculous that usually takes more than a single viewing to "get." Watching the arguments between Naota and the enigmatic, guitar-toting space alien Haruko Haruhara is a perpetual goldmine of comedy. Finally seeing Naota come into his own at the end is as triumphant as it is mind bending. 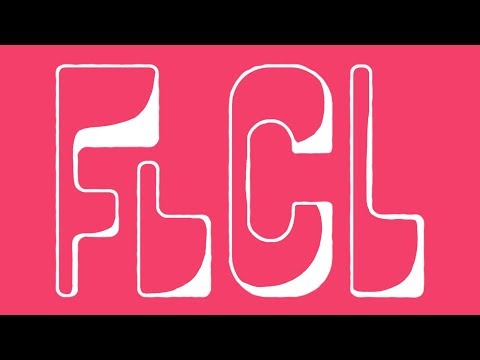 Eighteen years after the original came out, the Production I.G-produced show has found new life in the form of two all-new sequel seasons, FLCL: Progressive and FLCL: Alternative, to fans' excitement. Progressive recently wrapped up its run on Adult Swim on July 7, gaining quiet, if not universal praise during its six-episode run, and Alternative is set to premiere in September. This time around a new lead -- ambivalent 14-year-old Hidomi Hibajiri -- finds herself entangled in Haruko’s hijinks. What hasn’t changed is the show’s signature soundtrack, written by Japanese alternative rock band The Pillows.

Their explosive sound that critics have likened to Nirvana or the Pixies, but could just as easily be compared to Britrock bands like Oasis or even The Beatles, remains one of the series’ strongest attributes. The energy The Pillow's pop-rock songs brings is different from the usual orchestral scores you're likely to find in other shows. The group -- made up by vocalist and guitarist Sawao Yamanaka, lead guitarist Yoshiaki Manabe, and drummer Shinichiro Sato -- formed back in 1989 from the remnants of the now-defunct punk rock band Kenzi and the Trips. In almost three decades, The Pillows have amassed a cult following through FLCL, but also their prolific catalog spanning 21 studio albums with another record due out this September. After providing the background music for both Progressive and Alternative, they’re keeping the ball rolling with the seven-city Mono Me You Sun Tour -- their latest visit to the U.S. in seven years with assistance from fellow Japanese rockers Noodles and Chicago singer Cullen Omori. Five of the shows have sold out.

The band’s frontman Sawao Yamanaka spoke with Thrillist about his reaction to the series’ return, their approach to music, and their new tour. This interview was translated from their native Japanese and lightly edited.

Thrillist: The soundtrack of FLCL is arguably the most noteworthy part of the series. Could you break down your process for making songs? What’s your inspiration?
Sawao Yamanaka: I make my music all the time, so the style varies per song. Sometimes I make it from a guitar ensemble, sometimes I make it from a melody. It has been my habit to play the guitar while watching TV on the couch, and sometimes I fade into creating [a song] even without any intentions to do so. This time around, I wrote the lyrics based on the characters and story from the original FLCL.

How did it feel being called back for a second go at the soundtrack?
Yamanaka: I was surprised to learn that after so many years that there is a sequel, and honestly speaking I was like, "Wait a minute, doesn’t FLCL equal The Pillows?" So I got extremely excited when we found out that we were doing the music for these sequels. I wanted to make sure that we made something that met the satisfactions of not only the fans but also the staff. The ED [ending] theme of Progressive is amazing.

Did you try anything new or special in this time?
Yamanaka: I didn't think anything new was necessary. Because alternative rock never became a huge hit in Japan, that genre of music never became old. As soon as I thought of this ensemble of the two guitars for this music, I knew it would be perfect for FLCL: Progressive.

Listening to your work outside the show soundtrack, I hear a range of influences, from the Pixies to the Sex Pistols. What groups influenced you? What did you grow up listening to?
Yamanaka: As a child, I liked Simon and Garfunkel, and then I moved onto Japanese rock ‘n’ roll and punk rock in my teens, and then to U.K. rock -- the Stone Roses, Oasis, and Radiohead -- in my 20s. After that, I met with Noodles, with whom we're touring the U.S. this time around, who introduced and hooked me onto American alternative rock, which they have been most fond of.

Are there any specific people you each look up to/influence your performance?
Yamanaka: My favorite is Kim Deal from the Breeders. But I also love Ben Kweller, The Eels, and so many others.

Based on your experience, how does the alternative rock scene in Japan compare to stateside?
Yamanaka: Just like how Chuck Berry, Elvis Presley, and the Beatles are considered the base of rock ‘n’ roll, there are amazing pioneers such as Pixies, the Breeders, and Nirvana for alternative rock. I would say that it is the music and performed by the ones that appreciate and were mesmerized by these pioneers' creations. Whether or not it is American or Japanese may not be an issue, because I feel that the supporters of the alternative rock are more generous and tolerant to the bands from foreign countries, which may be the biggest reason that The Pillows, who don't even speak English fluently, was accepted in the west.

You’re on another U.S. tour. How are you all feeling? How do you usually prep for tours and just shows in general?
Yamanaka: We normally don't prep so much except for a standard rehearsal; however for the U.S. tour, I need to work on my MC in English. We used to be able to go to the U.S. frequently, but this tour will be over seven years since the last one. The venues are all much bigger than ever, so we are super stoked!