The Sexy Cooking Anime 'Food Wars!' Is the Most Fun Show on TV Right Now

'Food Wars!', aka 'Shokugeki no Soma,' understands best that food is a fun, sensual experience to be enjoyed to the fullest extent.

In the most famous scene from Juzo Itami's 1985 Japanese "ramen western" movie Tampopo, a yakuza in an ivory suit cracks open an egg, separates the yolk from the white, slides the raw yellow globule into his mouth, and spits it into his mistress's mouth. With the camera focused on the gross proto-makeout, the couple passes the egg back and forth, back and forth, until it breaks, the runny yolk spilling from the corners of the woman's mouth. Watching this feels dirty, a violation of privacy mixed with disgust and intrigue, the crossing wires of food and lust sizzling into a moment of pleasure rendered wholly absurd. Simultaneously giggling and getting uncomfortably turned on by the Egg Scene is the point.

Much of Tampopo, which officially became food film canon when the Criterion Collection restored and released in theaters a 4K version in 2016, makes plain the connections between food and sex; other snapshots from the film include a woman with a secret obsession for squeezing fruit, or a group of lunching women ravenously slurping noodles. Though most lurid moments are reserved for the B-plot and short asides, even the film's core story -- about a woman, Tampopo, on a quest to make great ramen -- approaches food with a sensual eye, handling a meal like a sacrament. The eater should do their best to appreciate the whole of the components that make up the dish in front of them. Eating itself should be an experience so visceral that a single mouthful can evoke overwhelming joy. 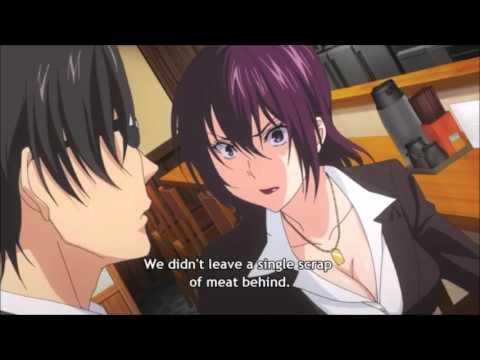 The anime series Food Wars! picks up where Tampopo left off and shamelessly runs with it, though it remains on the tamer side of PG-13. (Despite the pilot episode closing with clothes exploding off of people who came to shake down the main character while screaming "MEAT JUICES!!!!") Set primarily in an elite culinary institute (think something like the Culinary Institute of America in Hyde Park, New York, but for precocious and driven high schoolers), the show and its source manga follows the young, disruptive chef Soma Yukihira and his impossibly learned and specialized friends doing what they do best and enjoy most: cook. Food Wars! animates its chef-y dishes to their platonic ideals -- explained in jaw-dropping detail in a recent behind-the-scenes documentary -- to the extent of drawing every individual noodle in a bowl of ramen and having a color specialist on staff to focus exclusively on the food, which spans the culinary spectrum of regions and ingredients. They're just as likely to cook omelettes and rice as they are to use ants or skin a crocodile.

For food in anime, there is a "truth in its hyperbole," as Tejal Rao wrote in TheNew York Times about the katsudon in the competitive male ice skating (and boy love) anime Yuri!!! on Ice. This truth applies to the over-the-top reactions in Food Wars! that open up parallel universes where someone's shred to pieces because the vegetable terrine they just ate was that fucking good. Because of this, the series dips into fan service, sure, but it grasps the transportive nature of food, that a dish with strong honey flavors could evoke the image of dripping in honey at an apiary. Like, why not? A Japanese friend once told me that Americans don't appreciate their food enough, and watching Food Wars! both exposes that gap and invites us, in the extreme, to join in.

Food Wars! is more than teens learning how to cook the best food in the world; a competitive element drives the fast-paced series, establishing the dynamics of rivalries and friendships, separating the school's top chefs from the weaker ones. Called "shokugeki," these high-stakes food battles are like episodes of Iron Chef: They're set in a massive kitchen stadium, a key ingredient must be highlighted in the dishes presented to a judging panel, and there's color commentary on the preparation. In some of its most interesting moments, Food Wars! becomes a twisted interpretation of an informational cooking show, its Michelin restaurant-quality dishes dramatized as courtside action. Complicated techniques, like filleting notoriously difficult fish like eel or monkfish, are done in single, triumphantly exaggerated knife strokes; regional cooking concepts, like the tingly-spicy ma la in Sichuan cuisine, are explained in accessible detail. Food emanates an aroma-aura that takes up the whole room, and onlookers cheer for these moments like they just witnessed a dominant dunk in a close basketball game.

The recently wrapped fourth "plate" (season) had been entirely devoted to shokugekis between Yukihira and his friends fighting to take back Totsuki from a restrictive new school establishment in a marathon tournament with teams of 10. Like Tampopo's women in ramen, Food Wars!, too, is an outsider's fight to claim space in an industry that rejects them and their belief that good food need not be reserved for the "appreciative" elite who eat at spendy fine-dining establishments. Yukihira is the People's Chef, elevating Japanese diner food into clever dishes bursting with flavor. When he's at his best, Yukihira -- and his ethos that cooking should be fun and egalitarian -- can't lose, pulling out clever tricks that would blindside even experienced chefs. For example, a rice bowl topped with egg and aspic, a jellied meat stock considered antiquated and generally disgusting, melts from cubes of gelatin into a coating and luxurious sauce that I, for one, would absolutely eat. Regardless of ingredients, whatever ends up on the plate looks like it could be served in any of the best restaurants around the world, regardless of price point.

Food Wars! understands deeply the playfulness and discovery of eating, why we travel and hunt for new culinary experiences. The curiosity behind the show's most surprising dishes is why YouTubers like Binging with Babish have tried to recreate the food (which you can find recipes for in the 2015 Food Wars! cookbook). I'm not a bad cook, but I'm hardly capable of cooking most of the series' refined plates. Yet watching Food Wars! has made more excited to be in the kitchen; I extend myself to try more complicated recipes and try to be creative with ingredient swapping. And if it fails, oops, so what! I think back to the deranged experiments (ie. squid and peanut butter) Yukihira foists onto his classmates because it's fun -- cooking needn't be self-serious or burdensome, and if you keep an open mind, eventually something great (or sexy) may come together.