For 14 years, Joe Pickett and Nick Prueher have scoured thrift store VHS piles for comedic gold -- the public access mayhem, odd workout videos, shot-on-video Christian proselytizing, and other sorts of ephemera that only the dawn of home video can provide. The pair have turned their 6,000 discoveries into the Found Footage Festival, a touring clip show that proves one man's trash is another's outsider-art treasure.

But the festival's existence is in jeopardy, due to Prueher and Pickett's lightweight side-gig: pranking local TV stations. When they're not searching for pre-internet viral fodder, the two book appearances for colorful (and entirely fictitious) characters on segments of the local-affiliate news shows in the cities on their tour route. In the past, these bits have occasionally earned them sternly worded complaints, but hadn't landed them in hotter water until now. A pending lawsuit from Gray Television, a broadcasting company that owns TV and radio stations all over the US, could stop the show in its tracks. The accusation: Prueher and Pickett's gag appearances were an act of fraud. Or as the lawyers are calling it, "fake news." 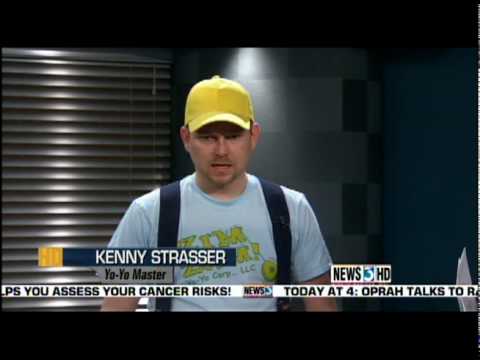 For one of their first big local goofs, they recruited comedian and friend Mark Proksch, who's starred in The Office, Better Call Saul, and a number of Adult Swimprojects, to be "Kenny Strasser," an environmentally-focused yo-yo master. Proksch didn’t know the first thing about yo-yoing, and it shows as anchors grimace through the awkward character’s desperate attempts to summon the yo-yo back to his hand.

Then there's "Chef Keith Guerke" -- Prueher in a cheap toque and apron -- who cites shit-and-blood-covered punk provocateur G.G. Allin as a culinary influence. He does a bit encouraging viewers to get creative with this year's Thanksgiving leftovers, coaxing the segment host to eat mashed potatoes and room temperature gravy ("because your hand will warm it up") in an ice cream cone with "corn sprinkles" and a singular, raw "cranberry cherry" on top. 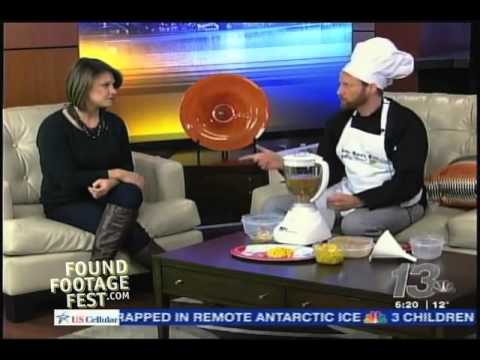 Booking these characters is not an elaborately composed hoax. Simply, they send out press releases making an outlandish claim by a person with an easily Google-able name to the stations and wait for a bite. In the case of Strasser the yo-yo master, the duo didn't even include any photos or video of his feats, Pickett says. Still, Strasser made it to air.

Way back in the beginning, around 2003, the duo found themselves trying to promote the Found Footage Festival tour on morning radio and noon-hour television shows. Interview after interview, the duo noticed the hosts routinely tuning out while they answered the same generic questions and pitched the boilerplate for the festival. So they started sneaking in deranged phrases to catch their interviewers off guard. At one point, Pickett dared Prueher to say "basketball murderers" on air. "Murderers had to be plural," he says.

Prueher delivered. "Oh, [the Found Footage subjects] might be anybody. They could be crazy basketball murderers for all we know," he said, which elicited no response from the interviewer.

Their in-game escalated from slipping in these outlandish phrases during tour promotion interviews to something bigger and ostentatious. That's when they began crafting and sending the press releases publicizing their oddball characters that proved many news stations weren't doing the most basic fact-checking on their would-be guests. Kenny Strasser and Chef Keith weren't real, but they were real enough to pass the noontime news segment sniff test.

It was their most recent stunt that backfired. They sent out press releases as a strongman duo called Chop and Steele, promoting the "Give Thanks 4 Strengths" tour that promised muscular entertainment. On air at WEAU, a local station in Eau Claire, Wisconsin, their feats barely rivaled the average construction worker, let alone Superman. They lifted cinder blocks, stomped on baskets, karate chopped sticks in half, and swung bats at a car tire, among other antics.

"I'm not sure when Gray TV caught wind of the ruse," Prueher says. "We left the appearance on WEAU having been thanked for coming. The station itself didn't seem upset by the appearance at all." They even asked the strongmen to tape a promo where they delivered the line, "We're Chop and Steele, and you're watching WEAU!"

The segment was recorded at the Gray affiliate station in November 2016. The Found Footage Festival Volume 8 DVD came out in February 2017, and clips of the WEAU appearances were posted online in March. Gray Television handed them the lawsuit -- the first time the duo have been sued as a result of an on-air prank -- a month later, in April.

Gray is charging Pickett and Prueher on three counts: copyright infringement on the grounds that the festival used their footage for commercial gains, fraud, and conspiracy. "The business model of Found Footage Festival is to lie its way onto local television stations with the specific goal of creating fake news," Kevin Latek, executive vice president and chief legal officer at Gray Television, tells Thrillist. The intention of the lawsuit is "to make crystal clear" that creating and profiting from this kind of subterfuge "is entirely unacceptable in a democracy."

Of the one hour, 21 minute runtime of Found Footage Festival Volume 8, which premiered in February, eight minutes are devoted to Chop and Steele. The remainder is local news bloopers; compilations of videos promoting the health benefits of urine drinking; outdated exercise tapes; the disastrously bungled Desert Storm Parade despite appearances from luminaries like Jimmy Stewart, Cesar Romero, and Roseanne Barr; a mildly ribald party planner infomercial; and cheesy police instructional videos. There are also some Christian strongmen that might have inspired the genesis of Chop and Steele.

The duo film one of their live shows every tour and release it on DVD. Pickett and Prueher's news pranks have only appeared on the last three of eight volumes of the show and make up about 10% of the total programming. Gray has asked that Pickett and Prueher privately disclose the Found Footage Festival financials as part of the lawsuit.

"Even if it’s semi-commercial speech, it’s still protected, and it has to be that way," says Anderson Duff, the attorney from Revision Legal representing the duo. (Yes, both the lawyer and law firm are real.) "If the only way you could criticize people was for speeches you didn’t get paid for, then no one would do that."

"They have the pockets to [teach us a lesson]."

In any case, the copyright claim likely falls under the fair use clause, Duff says. He points to an unsuccessful case against The Daily Show for its use of public access clips in television bumpers.

"The 'fair use' analysis is highly fact-specific," says Crista Laser, an attorney at Kirkland working on media and copyright law and who is not involved in the case against Pickett and Prueher. "Courts will look not only at how much of the work was used, but also the purpose of the use and whether it can be considered ‘transformative,’ such that it conveys a different purpose or has a different meaning from the original."

Laser cites a case in which one TV station used another station’s footage in a segment on the 1992 beating of Reginald Denny in the midst of the LA riots. Because of its commercial nature and failure to meet the "transformative" test, the appropriation didn’t fall under fair use, Laser says.

Including the fraud charge is also an unusual tactic, Laser adds. "Garden-variety pranks don’t often result in claims, perhaps out of awareness of the so-called ‘Streisand Effect,’ where an attempt to conceal something actually draws more attention to it," she says. Duff also interviewed the Yes Men, two politically-oriented pranksters who have pretended to be Dow Chemical Company CEOs on national television and impersonated dozens of more corporate executives. They've received very few formal legal proceedings other than a dropped lawsuit after they disseminated a press release in support of climate change legislation posing as the US Chamber of Commerce.

"I do personally believe that this is an attempt by Gray Television, rather than to start doing due diligence or better training with their affiliate stations, to chill my client’s speech," Duff says. The attorney thinks they have a good shot at winning the lawsuit -- fraud requires both proof of intentional harm and actual damage resulting from their actions.

Prueher and Pickett have been careful to keep it light and fun, and have gone out of their way to make the pranks silly, they say. When Chef Keith made a mess after he knocked over a table of his blended Thanksgiving slop, he stayed behind to help clean it up.

"We’re not going out there [and] doing anything mean-spirited," Pickett says. "We say in our press release we’re going to give them an entertaining segment, and we do."

The two have pointed out that the reason they're able to pull off this sort of stunt at all is because of lax fact-checking on the stations' parts, a slap-on-the-wrist indictment of the media. "The fact that it’s easier for them to walk on TV and act like [experts] than to walk into my apartment building is a problem," Duff says.

"They’re embarrassed and they want to teach us a lesson," Prueher says. "They have the pockets to do that."

The Found Footage Festival hasn't made millionaires out of Prueher and Pickett. The legal fees for their defense have racked up to about $85,000 -- an amount that could bankrupt a small potatoes show like Found Footage. With the weight of the lawsuit looming over their heads, Pickett and Prueher are touring relentlessly to raise money, and are seeking outside financial support through a GoFundMe campaign started in July. "We’re just trying to stay above water," Pickett says. So far, they’ve raised a little over $22,000.

They performed every night of August in Edinburgh, Scotland, though they haven’t turned up much new footage over there, saying thrift shops in the United Kingdom tend to be a little more well-curated.

"I’m not very patriotic about most things, but I am about [American] thrift stores," Prueher says.

Even abroad, fans continue to gift them videos that they incorporate into the show. Often, tapes that can’t quite draw out a goofy clip still have a spectacular VHS cover compiled and are displayed in the show. One recent gift will likely end up folded into a segment: It’s a copy of The Nuremberg Trials except "it was still in the shrink wrap and came with a free bag of microwavable popcorn," Pickett says.

In the end, the Found Footage Festival is the same old show it’s always been — goofy video clips, with a prank or two sprinkled in. Only now, there’s an unhappy recipient of their humor.

"It hasn’t changed our approach," Pickett says, "because we haven’t done anything wrong."

John Wenz is a freelance writer based in Madison, Wisconsin. You can follow him on Twitter at @johnwenz.