Amazon's new docuseries covers a decade-spanning story of injustice that could've been about any black, brown, or impoverished person caught in the trappings of the United States' criminal justice system. It just so happens to be about Meek Mill. Free Meek is rooted in the efforts to free the North Philadelphia rapper from prison after he was sentenced to two to four years for popping wheelies on a dirt bike without wearing a helmet in late 2017. It was a shocking sentence that the prosecution wasn’t seeking, but it was the choice of Judge Genece Brinkley, Meek's longtime judge and the documentary's chief antagonist.

After word of the egregious ruling spread, the #FreeMeek movement dominated Twitter feeds and news circuits. It wasn't a situation like Tekashi 6ix9ine's that entailed violence and drug trafficking and left the hip-hop community divided -- Meek's was bogus. From his label honcho Rick Ross to his once arch-nemesis Drake, artists across the board stood in solidarity, and people from all walks of life voiced their support for Meek Mill. This five-part series documents Meek's career and legal woes, shedding light on how the "Dreams and Nightmares" emcee became a co-chair and founding partner of REFORM Alliance, an organization dedicated to criminal justice reform that was founded by the likes of billionaires such as Jay-Z and businessman Michael Rubin. 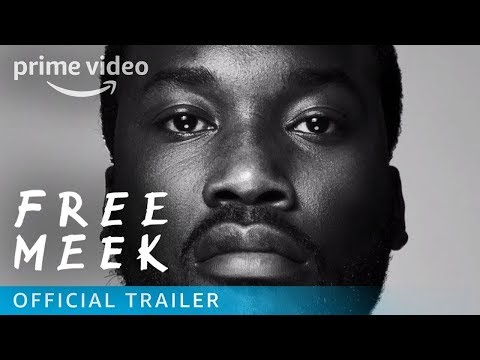 Free Meek isn't a congratulatory epic detailing how he came to be released from jail in April 2018 and drop the biggest album of his career. It's an infuriating and at times bleak account because, as the series is quick to establish, Meek Mill is not free. Like countless others out on probation or parole, he is subject to court supervision and can be sent back to prison at any moment for violating the terms of his probation. The incredible highs of Meek's meteoric rise from a battle rapper to a household name are swallowed and shat out every episode as viewers witness the snares of America's post-conviction system, from unrealistic travel restrictions to harsh sentencing for nonviolent acts. Only through callbacks of familiar tunes and the landmark events of his career does it avoid becoming altogether too dismal.

From behind-the-scenes looks at the making of 2014's Wins & Losses to his past relationship with Nicki Minaj, these inclusions serve as a backdrop for his legal struggles. This is the story of Robert Rihmeek Williams' fight for freedom, but it enjoys the spoils of the fact that he's a multi-platinum recording artist who makes for a compelling screening. This approach makes the three-hour endeavor much easier to stomach but all the more visceral. His journey benefits from luxuries not afforded to the average person, yet the system fails him nevertheless. Free Meek nails that concept to brandish one of its central arguments: No one is free until Meek is free.

Over five installments, the docuseries achieves its effectiveness through talking-head interviews, real-life footage such as Meek recording "1942 Flows," and reenactments of events not caught on camera. The interviews guide the discussion and feature commentary from Meek's family, industry professionals, and other celebrities. His family's cross-generational perspective -- from his mother, grandmother, son, or sister -- especially is the soul of the series, their compassion oozing through every anecdote. Eye-opening analyses from legal experts such as REFORM Alliance CEO (and CNN commentator) Van Jones and tenured investigative journalist Paul Solotaroff bring clarity to Meeks's case and reveal its inextricable ties to the corruption of law enforcement and the loopholes of court supervision.

However, it's the reenactments that bring Meek's struggles to life. The crisp scenes allow viewers to visualize moments that couldn't be captured on film for a variety of reasons, such as the pre-body cam era when Meek was initially arrested or Philadelphia's strict stance against cameras in courtrooms and judge’s chambers, which has spawned myths such as Meek’s allegation that Judge Brinkley requested that he remix Boyz II Men’s "On Bended Knee" and shout out the important women in his life, Brinkley included. The legendary mugshot that went on to become the cover of his 2016 Dreamchasers 4 mixtape hits different after seeing the events that led up to it during Free Meek's first episode, and the incessant depictions of courtroom proceedings are fatiguing, even as a spectator. These Michael John Warren-directed productions are best executed in the fourth installment, a How to Get Away With Murder-esque chapter illustrating the exploits of Tyler Maroney and Luke Brindle-Khym, a team of private investigators hired to find discrepancies within Meek's case. Contrary to earlier episodes that aimed to breathe reality into the unimaginable, this standout episode features on-location segments that recreate law enforcement claims in order to discredit them, exposing that corruption was always a factor in his legal nightmare.

The overall framing is downright impressive. From the interviews to the reenactments, Free Meek has complete control over its narrative. It unapologetically leans into its bias without omitting Meek's shortcomings, setting up a space where a person of color can be in the wrong without being subject to police brutality or heinous sentencing. By showcasing low points such as his probation violation in the midst of Hurricane Sandy and his Percocet addiction on full display, the series is able to critique discriminatory search and seizure practices and the negative effects that incarceration has on one's mental health. At one point, it even resorts to using an ethically questionable microphone gaffe while interviewing Judge Brinkley's lawyer. Existing outside the realm of journalism, Free Meek plays its game accordingly, and gutsy decisions like that make the results electrifying.

"It was only a matter of time before you had a rapper like Meek Mill take on the system," Van Jones says in the final episode. "That guy has a destiny way bigger than he knows."

In the months following his release from prison in 2018, Meek Mill released Championships to commercial success and critical acclaim. On "Oodles O' Noodles Babies," the thirteenth track from the record, he begins with a chilling statement over a rich soul sample: "His ma' smoked the crack while she was pregnant, so he can't even help that he crazy. He goin' to jail, it's inevitable."

The sobering Free Meek echoes that sentiment of inevitability. From his fateful arrest in 2007, there was a path paved out for Meek Mill, and that same path has dismantled the lives of millions of people of color and those less fortunate. Meek still isn't free at the conclusion of the five-part series, yet in its final moments he calls himself lucky. Even after three hours of watching the celebrity float through the criminal justice system like the plastic bag from American Beauty, one can't help but agree. Without his extensive resources, the everyday person doesn't stand a chance, so Meek's decision to use his platform to affect change is the triumphant coda that this tumultuous tale deserves. The amplification of the discussion about mass incarceration, mass supervision, and justice reform makes it pressing, but the chronicling of Meek Mill embracing his destiny is what makes Free Meek glorious.