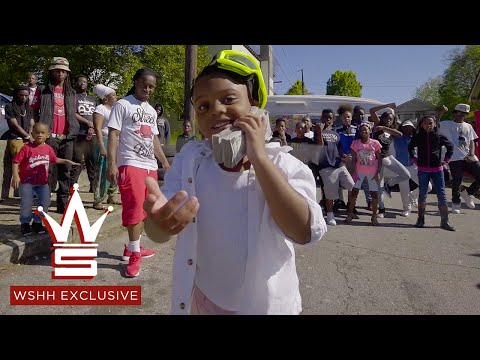 Donald Glover's Atlanta feels bigger than a normal sitcom. Besides the show's main characters like Earn, Paper Boi, Darius, and Van, there's a vibrant world of thirsty strivers, genuine eccentrics, and weary old-timers filling up the margins of every carefully composed frame. Many of the show's side characters are actually local celebrities from the city, adding a sense of authenticity to the show's rich fictional universe.

Tonight's episode, "The Streisand Effect," was no exception. In addition to spending time with the promo-obsessed pizza delivery guy Zan (a hilarious Freddie Kuguru), we also met a kid named Quentin, who might be familiar to anyone who spends a lot of time on World Star. Simply credited as "kid" in the credits, the part was played by Bankroll PJ, a 6-year-old rapper and the nephew of late Atlanta rapper Bankroll Fresh. In the same way Atlanta rap group Migos brightened up last week's episode, Bankroll PJ steals his scenes with ease.

If you're unfamiliar with PJ's work, here's the most important thing to know: he's really good at Instagram. He's got over 423,000 followers, and he's still in elementary school. Check out this picture of him chilling with Glover on the set between takes.

And here's another one:

He's got a lot of friends. Here's a photo of him with Rick Ross:

But anyone can take photos with celebrities. What really sets Bankroll PJ apart is his videos. Here's one of him celebrating his birthday.

Bankroll PJ's social media presence is likely what drew Glover and his creative team to the pint-sized viral superstar, who makes quite an impression when riding in the backseat with Zan and Paper Boi. It's a fitting bit of meta-casting: Paper Boi's storyline is all about an old-school artist confronting the stats-obsessed, self-promotion-filled world of minor-league rap stardom. What better way to playfully celebrate internet culture than by having an actually viral young rapper show up?

And Bankroll PJ is really good in the part. His delivery of his final line to the dude who stole his pizza -- "I know where you live!" -- is the perfect punch line to the episode's best scene. It's the same type of charm he shows in his many viral videos.

But his music is worth checking out, too. His song "Jump In" is a playful blast of energetic kid-rap that also comes with a positive message. "Stop the violence," says the text at the beginning of the video, and the spirit of that idea is reflected in the video's joyful mood of celebration. Check it out above. You'll be humming it all week.