Game of Thrones thrives on violent conflict. Though the series is packed with melodrama, political maneuvering, dark humor, graphic sex, and cool winter coats, it's also possible to view the show as a WWE-like series of pay-per-view ready showdowns. For years, one conflict has reigned supreme in the minds of many theory-obsessed fans: Cleganebowl.

Given that the promotional materials for Season 8 continue to dangle the Cleganebowl as a real possibility, this is something you're going to want to pay attention to. Let's take a closer look at this hypothetical not-so-Royal Rumble.

You'll likely remember the two hulking characters named Clegane who have appeared on the show: Sandor "The Hound" Clegane and Gregor "The Mountain" Clegane. If you're the type of person who can never remember character names, the Hound is the gruff warrior with a scar on his face who used to work for the dearly missed Joffrey and then became Arya's Uber-horse driver before she became the blind karate kid. (He's played by actor Rory McCann.) The Mountain is the giant goon who crushed Oberyn Martell's cute little head in Tyrion's trial-by-combat and then spent a season under a white sheet before being reborn as a killer Frankenstein in gold armor. (Gregor has been played by three actors over the show's run, but he's currently played by real-life strongman Hafþór Júlíus Björnsson.)

They are bros (like, actual brothers) but they are definitely not bros (as in friends). They have a legit beef that dates back to their childhood, when Gregor burned off half of the Hound's face for taking his little toy knight. It must have been a cool action figure, like the Westeros equivalent of a Pog or a Charizard card -- or the Mountain is just a scary psychopath.

Either way, they hate each other and have enough villainous back history and musculature to make any type of confrontation a must-see event in the GoT universe. But the Cleganebowl is something more specific than a Cain vs. Abel-style throw-down: it's a way of life, a meme, and a movement.

According to Know Your Meme, the theory was first introduced on a 4chan thread by an anonymous user in March of 2013. The proposed plotline involves the revived zombie version of the Mountain fighting on behalf of the accused Cersei Lannister in a trial-by-combat and the Hound picking up a sword against his brother as a representative for the Faith. Ever since the idea was introduced, it has sparked blockbuster levels of excitement that rival any big UFC bout.

The flames were stoked more in Season 5 when a flashback showed a young Cersei sitting down with a fortune-teller who told her she would be strangled by "the valonqar," a High Valyrian term meaning "little brother." There are a range of theories for who the valonqar could be -- most notably Tyrion -- but it's certainly possible that the witch was referring to the Hound, the younger brother of Cersei's murderous guardian. Imagine the Hound taking out his brother in combat and then going straight for Cersei.

Part of what makes the conflict so intriguing is that it wouldn't be the first time the two brothers have crossed swords on the show. Back in Season 1, when Ned Stark was still around to take Sansa to brutal jousting matches, the Mountain faced off against Ser Loras Tyrell, and the confrontation ended with the Hound jumping in to save Loras from the unhorsed and unhinged Mountain. The two battle for a bit before King Robert intervenes -- an amuse-bouche of unexpected violence. Watching it now feels exactly like a classic pro-wrestling interference run-in that gets broken up by a referee on WWE Raw.

Will the Cleganebowl happen in Season 8?

With the show ending this year, it's now or never for the Cleganebowl. After The Hound was tossed off the side of a cliff and left for dead by Brienne of Tarth in Season 4, it felt like the Cleganebowl might be off the schedule. Even in the heightened world of Game of Thrones, it's hard to battle your brother from the afterlife. Between Season 4 and Season 6, there was little to report about the Hound's whereabouts. Luckily, he resurfaced in "The Broken Man," the seventh episode of Season 6, and that quickly reignited speculation about the theory.

English actor Ian McShane, who guest starred in the episode as the wise and talkative Septon Ray, spilled the beans a bit about The Hound's return in an interview before the episode aired. "I bring back a much-loved character everybody thinks is dead," the artist formerly known as Al Swearengen told the BBC at the time. Initially, there was speculation that the Deadwood star had blown the coming Jon Snow reveal. But when Jon made his triumphant return early in the season, it was all the more likely that the much-loved character in question would be the Hound -- and, of course, it was!

While The Hound didn't get too many opportunities to shine in Season 6, he came back in full force for Season 7, which found him traveling with the Brotherhood, getting captured, and, eventually, traveling beyond the Wall with Jon Snow and his rag-tag group of heroes. On a plot level, he was pinging across the map with ease; on a theme level, the character is clearly seeking redemption for his past sins. (One of the more striking scenes early in Season 7 showed The Hound providing a proper burial for a farmer and daughter he stole from way back in Season 4.) Though he's still gruff, The Hound is no longer the same cruel, merciless man we met earlier in the series.

More importantly for the purposes of this article, he also ended Season 7 in King's Landing, where he got a chance to briefly confront his brother in the Dragonpit and tease the possibility of the Cleganebowl. "Remember me?" Sandor taunted his sibling. "Yeah, you do. You’re even fucking uglier than I am now."

In the promotional lead-up to Season 8, there's been quite a bit Cleganebowl hype. "There will be a chance of squaring up to his brother and facing those demons," said Rory McCann, the actor who plays The Hound, to Entertainment Weekly. The magazine went even further with one of their covers, which you can see below.

OK, the cover might say "Game Over," but it really should just say "CONFIRMED" at this point, right? This is likely as close as we'll get to confirmation at this point. At least until Season 8 actually starts on April 14. 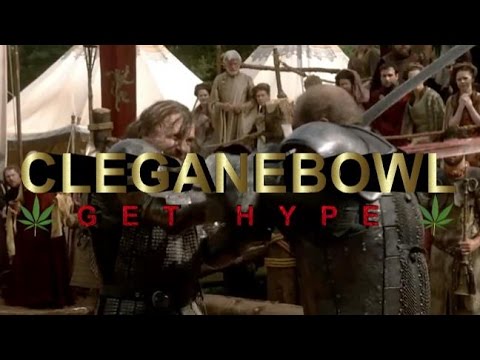 Why are people online so obsessed with this theory?

Sometimes it feels like Game of Thrones exists so its fans can theorize about possible twists, secret family trees, and potential resurrections. As much as a show like Lost inspired feverish analysis of every inconsequential detail -- shout out to Nikki and Paulo! -- the rich detail found in George R.R. Martin's novels takes it many steps further, because fans are speculating not just about what will happen on the show but in the A Song of Ice and Fire series as well. Along with R + L = J, the Cleganebowl has gripped the minds of a certain kind of super-fan like a nasty infection of greyscale.

Just watch the video posted above. Really. Watch the whole thing. You done yet?

That clip, along with similar ridiculous videos, helped popularize the theory, bringing it out of web forums, chat rooms, and discussion threads into articles like the one you're reading right now. There's a whole sub-Reddit devoted to the Cleganebowl, a place to share theories, images, and jokes about the eventual confrontation. For example, Sunday night's episode inspired multiple posts about a single line Jaime said. The thread has its own terminology and in-jokes. They mostly involve two words: get hype.

As you can tell from the menacing "Hard in the Paint" beat that scores the video above, the excitement fans have about the Cleganebowl is fervent. It's like a higher calling -- a religion founded on hype. The type of cause that, were it happening in Westeros, might lead to forehead carvings.

But there's also something reductive about the whole thing. Whether you love it or merely tolerate it, you have to admit that at this point Game of Thrones is a thorny and ambitious storytelling achievement, one that often wallows in dark themes about human nature, the dangers of religious fanaticism, and the struggle to retain order in a chaotic world where everyone is seeking power. Reducing the show to a macho wrestling match under-cuts that ambition.

So, enjoy the videos. Read up on the theories. Look for clues. Prep for the battle. And get hyped! Just keep your hype level in check -- for now.