The Secrets Behind Bringing the 'Game of Thrones' Dragons to Life

HBO
This post contains spoilers up through Game of Thrones Season 8, Episode 3 "The Long Night." Visit Beyond the Wall, our official Game of Thrones hub page for recaps, theories, spoilers, explainers, and the best episodes of all time.

Note: This story was originally published during Season 7 of Game of Thrones, before Viserion joined the Army of the Dead. Viserion was a good dragon while he lived, let's not forget that.

Watching Daenerys Targaryen's trio of dragons duke it out above the clouds during the Battle of Winterfell may make you forget that Drogon, Rhaegal, and Viserion (RIP, formerly undead Viserion) actually started life as tiny cute baby creatures only a short time ago.

That's the thing about magical dragons -- they grow. A lot. Making that possible each season is a team of skilled visual effects artists who have converted George R.R. Martin's fantasy prose into stunningly photorealistic CGI beasts. But delivering living, breathing -- and fire-breathing -- digital dragons hasn't always been easy. Thrillist tracked down the visual effects studios behind the work for a look back at these fiery beasts.

Game of Thrones wasn't always the big-budget TV series it has now become. In the first season, the show's visual effects worked at a much smaller scale, including, of course, the baby dragons, born after Daenerys (Emilia Clarke) emerges unscathed from a funeral pyre.

Thrones tasked BlueBolt, a visual effects studio in London, to build three photorealistic dragons, and have one, Drogon, perch itself on Daenerys' shoulder. This was made even tougher when the original dragon designs had some last-minute changes.

"We were given a sculpted maquette to base our CGI build on," recalls BlueBolt's visual effects producer Lucy Ainsworth-Taylor, "but when we began the build we realized that the spikes on the back of its neck were too long to allow it to turn its head without stabbing itself. We also made alterations to how the wings and legs worked so that we weren't creating any design problems later on when they would grow up -- we knew [the dragons] were going to fly in later seasons."

The grow up so fast

The dragons were still babies in Season 2, but Thrones had them re-worked by a new visual effects studio: Pixomondo in Germany. To quickly get up to speed on what makes a dragon a dragon, Pixomondo animators... played with frozen chicken on the studio's kitchen table. "I forced our animators and riggers to play with the wings to understand the natural restrictions and the anatomy of a real wing," says visual effects supervisor Sven Martin. "Peeling off the skin to one side to reveal the muscle layout was very helpful for the rigging artists, even though it was a little disgusting."

Pixomondo's visual effects artists would turn this reference into dragons that had a combination of reptilian and bird-like features. (The flying style was, according to Martin, "bats mixed with eagles.") And at this moment in the saga, the dragons also needed the ability to breathe fire -- and take out adversaries to Daenerys in the process.

At first, fire from the dragons had a slightly magical feel. But this changed in Season 3, when overall visual effects supervisor Joe Bauer sought for the fire to be made up from practical elements. And that meant: flamethrowers.

"They'd shoot huge flame bursts against black material to be used as an element or film a flamethrower right in the shot setting a stuntman on fire," says Martin. "Pre-animated dragons were used to get the right dynamics, feeding a camera arm with the flamethrower attached on the top. To get a proper interaction between fire and environment, we combined the fire elements with a digital fire simulation."

Season 3, and then Season 4, also saw Daenerys and other characters interacting much more with the larger versions of dragons, which, believe or not, were not real. Instead, Clarke would rehearse with a life-size puppet, or a tennis ball on a stick when the dragons started growing too large for a puppet to be used.

"Sometimes we used a slightly smaller green painted head representation in scenes where Drogon is resting on Daenerys' lap or when the other dragons get chained in the dungeons," says Martin.

The whole approach became much more complex when Daenerys started to climb and ride on the in-flight Drogon. At that point, Pixomondo artists would look to storyboards and pre-visualizations of such scenes, and then try their best to pre-animate the flight. Those plotted ideas were then translated for use on a motion-control gimbal -- kind of like a dragon-shaped flight simulator -- which allowed Clarke to perform against a "living" dragon with its own mannerisms. The more organically the real-life actors behaved, the more real the CG-enhanced scenes would feel. 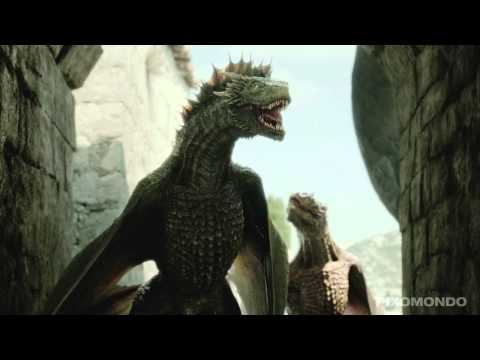 The dragon animators had their own ways of working out how the dragons would behave. Martin calls this "hand previs," and it involved his team acting out a scene themselves with whatever props they could find. "I still remember the animator and myself," he says, "playing the two chained dragons down in the dungeon, struggling against a rope held by our producer."

By Season 5, the dragons had grown into full-blown beasts. That's seen most pointedly in the Daznak's Pit sequence, when Drogon swoops in to rescue Daenerys and, in the process, kills a whole bunch of Sons of the Harpy.

This time around, a practical flamethrower rig was fixed onto a Technocrane, a large crane arm that provides smooth camera moves. Here it allowed for "repeatable" moves of bursts from the fire rig. The extra accuracy meant that pre-made animation could feed directly into the flamethrower, and then, later, could be more easily connected to the final CGI dragon. 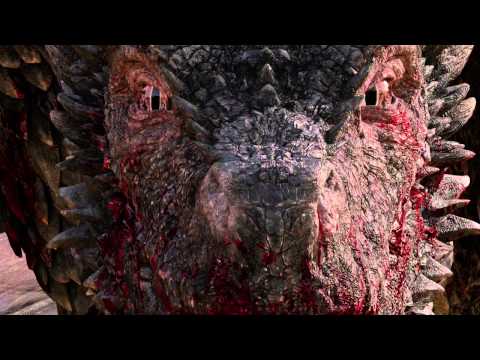 Using a model previously built by Pixomondo, visual effects studio Rhythm & Hues in Los Angeles was brought on board to take the Daznak's Pit rescue to the next level. As well as extending a stadium filmed in Spain and adding in extra crowds, Rhythm & Hues had to deliver an aggressive Drogon, then have Daenerys climb on his back to fly away.

For Rhythm's visual effects supervisor Derek Spears, that meant getting underneath the skin of Drogon and finding the "dragon motivation."

"There was definitely a, 'I'm protecting my mistress' thing going on," says Spears. "We tried to show a range from unabashed fierceness to all of a sudden being slightly wounded and cornered, where Drogon's in pain but he had to fight to survive."

We see Drogon, Rhaegal, and Viserion in even more devastating form when they attack the slaver fleet off Meereen at the end of Season 6. The dragons were once again Rhythm & Hues creations, while Meereen environments done by yet another company: Montreal studio Rodeo FX. Just as with the other riding shots, the dragon motion was pre-animated, and that drove a "buck" that Clarke sat on as Drogon attacks.

The stunning part of these shots -- and perhaps the most challenging part of the process -- is that they are not completely done through CGI (in many ways it would be easier if they were). The fire elements are real, some of the sinking boats are practical set-pieces, and of course Clarke is there on Drogon's back. That approach grounds the dragon scenes in more reality and is a big part of all the visual effects work in the series. 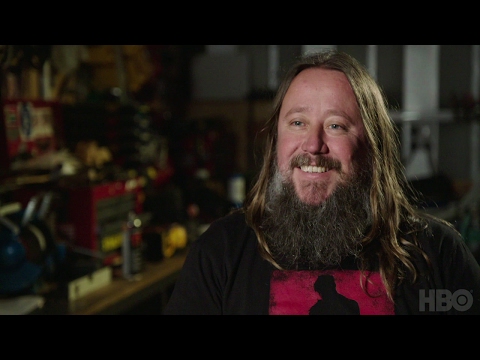 Bigger battles means more fire, which has also progressed from a technical point of view this season. Whereas previously a Technocrane had been used, Season 7 enlisted the aid of a flamethrower on a Spidercam cable system -- that crazy camera you see flying above players at football games -- to depict the dragons unleashing a ton of fiery action.

Winter might be here, but it's going to be pretty hot.

Ian Failes writes about visual effects, animation, and dragons whenever he can. Follow him to the Iron Throne: @vfxblog.