A Game of Thrones episode without Tyrion is that rarest of things, like an Anthony Weiner mayoral campaign without a dick pic or an Oklahoma City Thunder Western Conference Finals game six against the Golden State Warriors without a choke job. And so many other heavy hitters were absent this week, too -- Jon, Sansa, Littlefinger, Theon, Ramsay, Brienne, Tormund "MF" Giantsbane -- that "Blood of My Blood" was bound to feel slighter than its Season 6 brethren.

But it was pretty good! Bran had a RAM meltdown and met a long-lost relative. Arya took in some more comedy and further vexed the Waif. And Daenerys boasted a lot, even though she's at least a week's ride from Meereen and 1,000 ships shy of her ship-having needs, and she yelled at her khalasar from atop Drogon in a voice that, let's face it, never would have carried far enough for nine-tenths of those Dothraki dudes to have heard. Let's get into it.

This weekend, George R.R. Martin hit pause on his seemingly endless quest to finish book six in the seemingly endless "A Song of Ice and Fire" saga to appear as the guest of honor at Balticon 50. The science-fiction and fantasy convention held in Baltimore dangled these GRRM-related goods and services:

For that last one, Martin took the stage at Balticon a few hours before Sunday night's episode of Game of Thrones aired and read a new excerpt from the long-awaited The Winds of Winter -- a chapter told from Aeron "the Damphair" Greyjoy's point of view that, by all accounts, hammered home the already obvious: that Euron Greyjoy is not a nice human being.

While the Euron in the books and the Euron on the show aren't exactly comparable, they do share a deranged swagger and, more importantly, command over a sizable fleet. Why am I bringing all of this up, even though zero Ironborn appeared in "Blood of My Blood"? Because those ships were indirectly name-checked during a conversation between Daenerys and Daario:

Daenerys: "How many ships will I need to bring my khalasar over to Westeros?"

Daario: "The Dothraki and all their horses, the Unsullied, and the Second Sons? One thousand ships, easy. Probably more."

Daenerys: "And who has that many?"

You'll recall that, just last week, after nearly drowning in that super-fun Ironborn ritual where the kingsmoot winner gets purposely held underwater until he drowns, and after spotting Theon and Yara slinking away with his best war vessels, Euron specifically ordered his new subjects to build him precisely 1,000 ships. How convenient!

Except that it's more complicated than that. 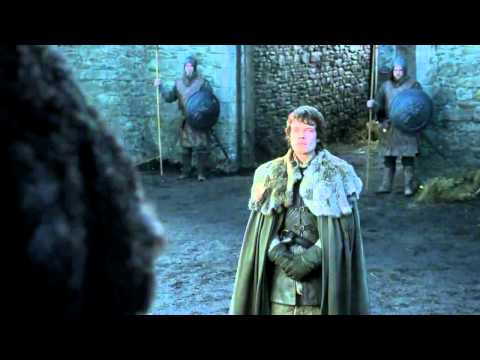 We're being pushed to think that Daenerys will transport her troops overseas on those 1,000 ships. And that might happen. But a few things stand in the way of it being an easy transaction:

1. Euron. He's such a dick. It cannot be stressed how much of an ass this guy is. He's also a misogynist and enslaves/thralls those he conquers. Something tells me he'd rub Dany the wrong way.

2. Daenerys. She's kind of an ass lately, too. Someone who unleashes quotes like "I take what's mine" and seems pleased to be referred to as a conqueror is not someone you're going to want to do business with. Even batshit, brutal Euron won't know what's coming when she sics Viserion and his scaly friends on him and then jacks the rest of the fleet.

3. Theon and Yara. They bolted from Pyke well ahead of Euron and his loyalists, so they have a nice head start if they want to steal their evil uncle's plan of convincing Daenerys to let them help her take the Iron Throne. And she might be more sympathetic to them, given that a strong woman is commanding the fleet. But a fourth barrier to the Iron Islanders' plan to be part of the Targaryen takeover -- and one that seems to be forgotten -- is Tyrion.

4. Tyrion. Savvy viewers will recall the sole conversation between Tyrion and Theon, one that ended with the Ironborn ward of the Starks being absolutely served. (Watch the clip above and laugh -- especially at how the camera pans by Theon's humbled face as Tyrion passes through at the end.) Their tête-à-tête happened in Episode 4 of Season 1, when Tyrion stopped at Winterfell after his sightseeing trip to the Wall. We learn that Tyrion dislikes the Ironborn for their pointless rebellion prior to the events of the first season, as he witnessed all the Lannister ships docked at Lannisport burning, as well as the sailors in them.

When and if Theon and Yara -- or Euron, for that matter -- arrive in Meereen, they're not going to get a warm welcome from Tyrion. Then again, he does profess to have a soft spot for cripples, bastards, and broken things -- and Theon is decidedly more crippled and broken than he was five seasons ago. Maybe they'll hit it off all these years later.

After enduring the worst sketch comedy this side of the dwarf follies at Joffrey's wedding and countless RBFs from the Waif, Arya may finally be wrapping up her Braavos storyline. Will she return to Westeros? And if so, how? Let's speculate!

I'm just spitballing here, but maybe Arya will kill the Waif, be freed from her service with the Faceless Men, and journey with the acting troupe across the Narrow Sea. Perhaps they've been booked to perform at a wedding of some kind and require someone to play Arya in an upcoming production? And maybe that wedding involves the Freys? Safe bet, considering how many Freys get married off on this show. Someone's gotta kill old Walder, right? And the preseason trailer did show Walder raising a glass in toast. What then? Maybe Arya can morph into the Arya-sized girl/child bride that horny goat Walder was bouncing on his lap in this episode.

What's Margaery playing at? She's obviously pretending to have atoned for her sins, and is manipulating Tommen into thinking that she's on the High Sparrow's side. But what's her endgame, other than the hope that she'll be able to save Loras? It seems like Olenna knows what's up; you don't see many old noblewomen showing up to a standoff that had been planned to be a violent skirmish. And you also don't see many helmets quite as feathered as Mace Tyrell's. What a dandy!

I'm happy that Jaime is heading out of town, though, after he's dismissed from the Kingsguard by Tommen the Patsy, aka his son. That's one less person keeping Cersei in check, and I really want Cersei to go full Cersei. I live to hear her utter that line from the preseason trailer: "I choose violence." And I live for Cleganebowl. Make it happen, Benioff and Weiss!

My colleague the Three-Eyed Patches broke down Bran's visions, but I'd like to focus on the wildfire portions -- that glowing green substance the maesters are seen pouring into a cask in the tunnels and that ignites in a rolling fireball. What if Cersei loses her trial-by-combat and, sentenced to die, she enacts a plan to destroy the High Sparrow using wildfire? Interestingly, Jonathan Pryce may have let something along those lines slip in a recent interview. If true, that would be a nice echo of Mad King Aerys II from Bran's vision, when he says, "Burn them all." Only I'd expect Cersei to live long enough for Arya to kill her. Someday.

This was the worst dinner party of all time, in my opinion. "You're a nervous talker," prophesized Gilly. That is definitely true. Also true: Dickon is a bad name. And Randall Tarly is my new favorite character, and I can't wait to see his face when he finds out that his precious Valyrian sword is gone.

He's ba-a-ack, and he's none too happy -- again. "They're laughing at us!" gripes the Frey overlord, whom I have missed greatly since he slaughtered all of my favorite characters at the Red Wedding. It seems that Brynden Tully, aka the Blackfish, aka the uncle of Catelyn Stark, Lysa Arryn, and Edmure Tully, has re-taken Riverrun, and Walder means to take it back. How? By reminding the Tullys who he's keeping as a hostage. Poor Edmure, which is an anagram of demure!

Walder did let slip a few interesting nuggets of info. The Mallisters and a few other previously North-leaning bannermen are back supporting the Tullys. And the Brotherhood Without Banners is stealing supplies from the Freys -- and probably looking to hang a few of Walder's kin, too. Also, Brynden Tully, if you recall, was essentially the sheriff of the Vale at the outset of the series. With Littlefinger and the Arryn army positioned near Moat Cailin, the Blackfish has a probable ally just to the north of the Twins. 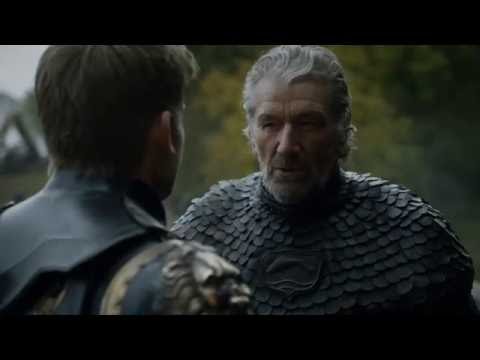 Check out all the latest Game of Thrones Season 6 photos that tease the next episode.

John Sellers is the Entertainment director at Thrillist. He is so ready to get hype for Cleganebowl.