HBO
This post contains major spoilers for Game of Thrones Season 7, Episode 5, "Eastwatch," and every episode before it. Visit our "Beyond the Wall" hub for more GoT recaps, theories, and spoilers.

On top of cracking the Jon Snow code, this week's Game of Thrones,  "Eastwatch," re-introduced another bastard back into the cast. Turns out he may not have been rowing for as long as we thought he was.

Gendry, the blacksmith and illegitimate son of King Robert Baratheon, is back after floating out to sea in "Mysa," the Season 3 finale. The Season 7 appearance is justice for viewers who've pined for his return since his trip out to sea, but like most things in Thrones, Gendry's reemergence may have larger implications than simple fan service.

Case in point: all that paddling around various oceans of Westeros seems to have gifted Gendry the upper body strength to fight off gold cloaks at King’s Landing with a massive offensive warhammer, which ties back to Westerosi history that just pre-dates the show, amplifies the thrill of seeing a bastard Baratheon join the same team as a bastard Stark, and inspires an interesting new twist on one of the longest-standing Game of Thrones theories. Here's what you need to know:

How Thrones welcomed a fan favorite back to war

At first, it looked like Gendry might take one of the many swords eyed up by Davos -- he was always a capable blacksmith, and we saw him yank a sword out of the coals. But Gendry already has a weapon made when his old friend arrives to King's Landing: “I don’t know much about swinging swords, but this -- this I know.”

Gendry proves that he can swing that massive hammer in Blackwater Bay, crushing the skulls of two gold cloaks in one swing each. That leads Davos to confirm later on to Jon that Gendry can “handle himself.” Despite growing up not knowing anything about the history of his family, something in Gendry makes him immediately admit to being Robert Baratheon’s bastard when he gets within speaking distance of Jon. Luckily, Jon has grown up hearing stories about the wars fought with Robert and Eddard on the same side, and is ready to trust Gendry enough to accept his help on Team Wight! The only weird thing is that Jon said he grew up on stories of Robert and Ned in war, but didn’t let out a knowing chuckle when Davos mentioned Gendry used a hammer.

During Thrones' first season, we’re given expository glimpses into the war that put Robert Baratheon on the Iron Throne. We’re told that the Mad King Aerys burned Eddard Stark’s father and brother, and Prince Rhaegar Targaryen kidnapped Robert’s betrothed true love, Lyanna Stark. Ned Stark found himself the Warden of the North and teamed up with Robert, who he assumed would be his future brother in-law, to ride South, rescue Lyanna, and unseat the Mad King. Robert had to ride his army North from the Stormlands to meet the Stark forces (and those of Jon Arryn of the Vale, the person whose death kicks off the series). Once the rebel forces were united, they brought House Tully into the battle when Ned married Catelyn and Jon Arryn married Lysa. The forces then turned South to unseat the Mad King.

Even when Robert Baratheon was a knight at tourneys, pre-dating the rebellion, he didn’t like to joust -- which might explain his boredom in the first season’s tournament. Instead, Robert liked the melee, an event where fighters compete in combat off a horse. That’s where he could bludgeon his opponents with his warhammer. Robert Baratheon’s warhammer was large and spiked, per George R.R. Martin's books, forged for him by Donal Noye (a now-one-armed Brother of the Night’s Watch in the novels who has not appeared on the show). In the novel Game of Thrones, the warhammer is described as so heavy that Ned Stark could barely lift it -- and this is a guy who fought with Ice, a giant Valyrian Steel broadsword so large it got melted down into two swords for the Lannisters in the premiere episode of Season 4.

Valyrian Steel, a model shop in the business of officially licensed Thrones replicas, gave us a glimpse of Robert’s Warhammer in a limited run of the weapon. Since it was for collectors not battles, it only weighed 10 lbs, but look at how menacing it is:

Gendry deciding to wield his own warhammer is the most like his father that the poor boy has ever been. Unlike Robert, Gendry didn’t grow up fighting, but learning how to smith his own weapons. Choosing to craft a warhammer rather than a sword for himself is a way of him reclaiming the Baratheon name in some small part, as fitting as Jon finding a Northern Valyrian steel sword like his not-father Ned had. However, a Baratheon warhammer isn’t just a weapon, it’s also a symbol of how Robert turned the tides of the war against the Targaryens and became King of the Seven Kingdoms.

The Battle of the Trident

The decisive battle of Robert’s Rebellion is the same one that would make Robert Baratheon’s skill with a warhammer legendary. The rebel army met the King’s Army at a place called the Trident, where three streams flow into one major river (resembling a trident). Leading the Targaryen forces was Rhaegar Targaryen himself, wearing black plate armor with a red three-headed dragon symbol on the chestplate made of many rubies. Rhaegar was a bit showy with his armor, putting all those rubies on it (you'd think he’d put a ruby on a dagger he once owned, too?), but Robert wasn’t any less intimidating with his warhammer and a helmet that included large stag antlers sprouting out of the side. It's an image depicted in A World of Ice and Fire by artist Justin Sweet...

...but fans have also spotted the stag helmet in the background of Season 1.

The two met in single combat on the northern bank of the Trident, Rhaegar with his longsword and Robert with his warhammer. The tides of the war turned against the Targaryens when Robert killed Rhaegar with a single blow from the warhammer. Robert hit the ruby breastplate so hard, that he caved in Rhaegar’s chest and sent the rubies flying into the river. Ever since then, that spot on the Trident River is called the "Ruby ford." 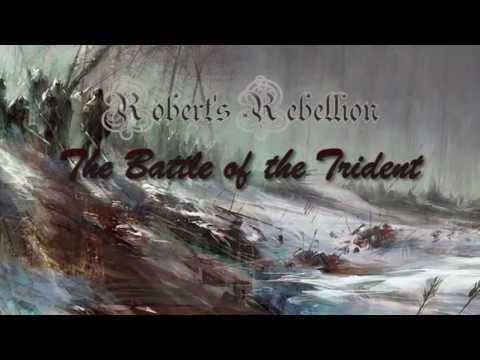 Stark and Baratheon vs. The King, redux

Gendry is only half Baratheon, but thanks to Joffrey’s murder-happy spree of Season 1, he is the last actual son of Robert Baratheon left alive. Now he's off with Tyrion and Davos to Dragonstone, and on to the North to fight in a greater battle than he ever could have planned for. Leading that charge is single-minded Jon Snow, who would have grown up hearing about Robert’s Rebellion. It isn’t a direct echo of history, but Gendry and Jon being part of a fighting force it is another interweaving of two great houses, with great weapons, against a King… this time The Night King.

The Battle of the Trident and Robert’s warhammer killing Rhaegar Targaryen sealed the relationship between the Great Houses of Westeros in a status quo that is only now being upended. Robert’s victory at the Trident prompted Tywin Lannister to sack King’s Landing, leading Jaime Lannister to murder Aerys, leading The Mountain to murder Ellaria Martell and her children (pissing off Oberyn), leading to Baby Daenerys being forced to flee Dragonstone for Essos, leading to Robert being King, with Jon Arryn as his hand and Cersei as his queen.

If you think about the Battle of the Trident as the conflict that defined the way the major houses of Westeros interact with each other, and realize that the direct consequences of the Rebellion led to the events we’ve been watching on the show. Thrones hasn’t stopped to tell the tale of the Battle of the Trident in full, only having characters reference the battle in passing, like Ned and Robert on the King’s Road in Season 1 and Barristan Selmy to Daenerys in Season 3, but anyone coming across the location could spring the lore at any time.

"The dragon has three heads"

Ever since Daenerys had visions of snow falling on the Iron Throne while she was in the House of the Undying, there’s been debate about if she witnessed the literal future of a burned out throne room in Winter or a metaphorical representation that either Snow (Jon) or the Night King would reach King’s Landing. If Jon and his forces of good fail to keep the Army of the Dead behind the Wall in the North, just how long will the war with the wights take? The war between Cersei and Daenerys has been raging for five scant episodes -- how long can Westeros last in open warfare with magical creatures?

Perhaps it’s fate, or the will of the Lord of Light (who has a taste for Gendry blood!), to bring a Targaryen, a Stark, and a Baratheon back to the Trident, to the Ruby Ford, but this time as a force for the living, fighting against the Night’s King. The prophecy of the Prince Who Was Promised has been thrown into interpretive vagueness thanks to Missandei's Valyrian grammar lessons and Melisandre's doubt in her own foresight, and doesn’t take more than two minutes to Google up various theoriesabouthowGendryis Azor Ahai. Who is to say that "the dragon has three heads" can’t be about Jon, Dany, and Gendry? Robert Baratheon did have a Targaryen grandfather (fun fact), so Gendry’s like...one-eighth to one-sixteenth Targaryen. If the Game in Game of Thrones is actually Clue, what’s in the envelope could be "Targaryen/Stark/Baratheon, with Valyrian Steel/Warhammer, at the Trident."

Dave Gonzales took The Black in 2012 and has been defending the realms of men ever since. His watch began on Twitter @Da7e and through the Weirwood 'net at StormofSpoilers.com.