Icon Sportswire/Getty Images/Aaron Rodgers/Instagram
This post contains spoilers for Game of Thrones Season 8. Visit Beyond the Wall, our official Game of Thrones hub page for recaps, theories, spoilers, explainers, and the best episodes of all time.

Just when you thought Game of Thrones couldn't get any bigger, that its grip on American pop culture was so tight that there couldn't possibly be anything left to squeeze, showrunners David Benioff and D.B. Weiss enlisted one of the most popular players from the country's most popular sport for a cameo rumored to have been in the works for a while. That's right: Green Bay Packers quarterback Aaron Rodgers, a Super Bowl champion, MVP, and one of the NFL's most recognizable stars, showed up for the briefest, almost unrecognizable moment in the ultra-violent penultimate episode of Game of Thrones.

The only question is: Where the hell was he?

Twitter sleuths narrowed it down to two possible moments, though both seem suspect. The most popular version seems to be that Rodgers briefly appears in profile as a Lannister archer:

But that's... not Aaron Rodgers. It's just a wannabe who looks like him. The other popular choice is that Rodgers appeared as one of Drogon's many victims, getting burned to a crisp in a brief solo scene:

Once again, close but no cigar. As you can see from a behind-the-scenes video, Rodgers doesn't appear in either of those scenes, and it's virtually impossible to pick out where he is:

Plus there's the fact that Rodgers' own Instagram account shows him in an outfit that doesn't match either of those scenes, so it's unlikely that those shots are him.

In the end, it seems Rodgers had a pretty anonymous role. That's why they call them "extras." Don't feel too bad for the quarterback, though, who happens to be one of the highest-paid players in the NFL. He may not have been killed or involved in one of the "steamy scenes" as he'd hoped, but not everyone can say they got a chance to appear -- however briefly -- in one of the biggest shows of all time.

The Packers legend joins an illustrious list of other stars who've made appearances as extras on the hit HBO show, including Ed Sheeran, Rob McElhenney, Chris Stapleton, and pitcher Noah Syndergaard. 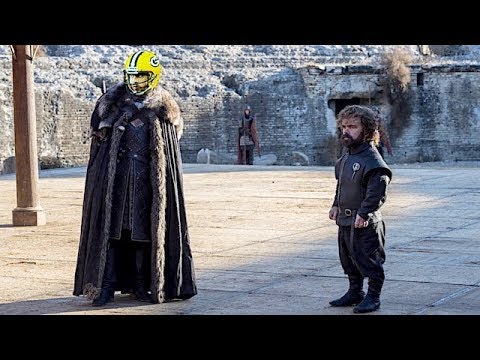 Wes Rendar is a writer for Thrillist.
Our Newsletter