HBO
This post contains spoilers for the Game of Thrones Season 8 premiere episode, "Winterfell." Visit Beyond the Wall, our official Game of Thrones hub page for recaps, theories, spoilers and explainers.

Of all the characters from the pilot of Game of Thrones who are still alive, Bran is arguably the one who's changed the most. The rival for that title might be the man who paralyzed him: Jaime Lannister. Bran has transformed from an energetic pipsqueak with a penchant for scaling the walls of his home castle into the stoic, stationary, and all-seeing Three-Eyed Raven. Jaime started as a snotty villain with a Disney prince haircut, who would do anything, including attempt the murder of a child, to conceal his incestuous relationship with his sister Cersei. Now he's a tortured soul with a conscience, willing to abandon his forbidden love for a cause higher than his own. And now these two have reunited. So, uh, how's that going to go?

At this point: We don't know. The fateful reunion comes in the very last moments of the season premiere. Throughout the episode, Bran has been sitting in Winterfell's courtyard patiently waiting. (During the official premiere screening in New York, the Radio City crowd erupted in giggles every time he was shown with that blank look on his face just sitting there.) Samwell Tarly even asks him point blank what the hell is going on; Bran replies that he's waiting for an "old friend." That old friend turns out to be Jaime, no longer blonde and clean shaven, but grey-haired and grizzled. (Well, as grizzled as Nikolaj Coster-Waldau can look with that bone structure.) When the Kingslayer takes off his hood after his long journey from King's Landing, the first person he sees is the kid he essentially condemned to death. Awkward! 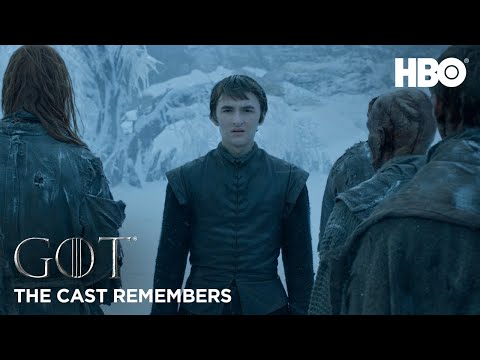 The premiere episode is so full of reunions that that it sometimes reads as fan service. Arya Stark and Jon Snow meet up for the first time since he left Winterfell for the Night's Watch. He asks her if she has used the sword he gave her, Needle. She says, "once or twice," vastly understating her kill count. Arya also hangs with her old pal Gendry and her old frenemy The Hound, asking the former to make her a special weapon. Sansa and Tyrion haven't conversed since she escaped King's Landing in the chaos that ensued when Joffrey was poisoned at his wedding, which had followed Sansa's own wedding to Tyrion, who she left behind to shoulder the blame. Now they're talking again, and it's, as one might assume, tense. (And then there's that lingering question: Are they still married?)

Still, the eye contact between Bran and Jaime make is both the biggest tease and the most shocking of the meet-ups, directly paralleling the end of the first episode ever. By now the characters seem disconnected -- each has been on his own narratively disparate journey. But they are inexorably linked. At the very end of the pilot, young Bran scales Winterfell and stumbles upon Jaime having sex with his sister Cersei. It's an act that's not only, uh, untoward, but also could jeopardize the Lannisters' entire standing and claim to the Iron Throne. Jaime simply decides to fix the problem by nonchalantly pushing the child out the window, remarking to Cersei, "The things I do for love." It puts Bran in a coma, and sends Jaime and Cersei on a ruthless offensive to protect their interests. By a transitive property one could argue all the misfortune that come the way of the Starks -- from Ned's head to Catelyn's throat -- stems from that act.

When Bran's a child he claims to have no memory of how he fell, but now he can see through time, having declared: "I can see everything, everything that's ever happened, to everyone. Everything that's happening right now." That means he's figured out who sent him down this path, and he likely knows how Jaime has evolved from a one-note villain. Over the seasons we've seen the Lannister bond with Brienne of Tarth, explaining how his title of Kingslayer carries an unexpected emotional burden. His decision that Cersei's machinations have gone too far for him even further proves there's a soul beneath that armor.

Bran clearly wants to have a chat with the new arrival, but he's also basically an all-seeing god so it seems he's aware that Jaime's path hasn't been entirely evil. Or maybe he knows something that we don't, something about how that fall shaped the past and future. He likely wouldn't have become the Three-Eyed Raven without that push. Whatever it is: That conversation, most likely to happen in Episode 2, will certainly be fraught.