Which dead character would you most like to see return to Game of Thrones? Cast your vote now in our high-stakes bracket tournament.

Note: mild spoilers for all six seasons of Game of Thrones to follow. Proceed with caution.

Joffrey Baratheon, the rabid heir to the Iron Throne, the hush-hush "twincest" spawn of Cersei Lannister and her bro Jaime, and tormentor of betrothed (poor Sansa) and prostitutes (poor Ros) alike, was Game of Thrones' most crystalized chunk of pure evil. The grade-A a-hole showed no remorse when it came to his punkery, and when he met a poisonous death on his wedding day, Thrones fans cheered through their collective gasps. Few TV characters have ever gotten what was coming to them than Joffrey.

But, man, I miss that little bastard!

Apparently, those keeping up with the politics of the Seven Kingdoms don't share the sentiment. In the first round of our "Which Dead Character Should Return to Game of Thrones" bracket, voters dealt another blow to the one-seeded puppet king by rallying around Ros, the aforementioned prostitute Joffrey killed in season three to satisfy his sadistic whims. The race wasn't neck-and-neck, either -- the sympathy vote carried Ros to a 72% landslide (where she now faces Grey Wind the direwolf!). People loved to hate Joffrey, but they couldn't endorse his violent behavior. Heart trumped logic.

In Season 1, Joffrey escalated from whiny twerp to merciless dictator when he ordered the death of Sansa's father, Ned Stark, after promising to spare his life. Slouched on the throne, Joffrey spends most of Season 2 making poor decisions just to get a rise out of those who surround him. He tormented Sansa because he could. He mounted a war because he could. He starved the people of King's Landing because he could.

When the world pushed back, his frothing mouth only spat bigger bubbles. When the truth of his lineage became clearer, the guy ordered the murder of every purported bastard child in King's Landing. Joffrey loved to flex his psychotic muscle, even when showered with gifts. When Tyrion presented the sexually frustrated teenager with Ros, Joffrey forced her to beat up another prostitute and eventually shot the working woman with a crossbow.

Joffrey was a homophobic, misogynistic, fascist little wiener. He was born from such a depth of hell that he made Damien from The Omen look like Quvenzhané Wallis. Not even Facebook commenters could sling his level of vitriol. 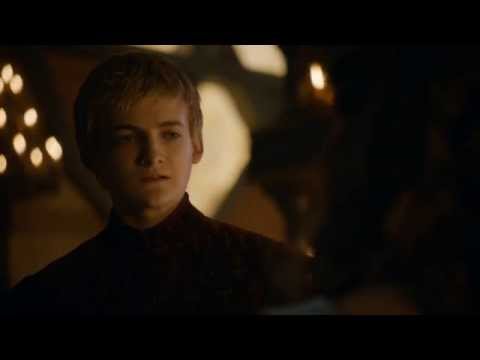 No, no, you're right: the last thing HBO's blockbuster fantasy series needs is more characters. Anyone who can wrap their mind around every cranking cog in the Game of Thrones plot machine deserves an honorary engineering degree from George R.R. Martin University. But Thrones' dedication to political realism, especially since Joffrey's rapturous demise, has fostered stagnation. It's like if The Lord of the Rings: The Two Towers had been broken into two seasons -- characters siloed in their own universes on their own individual quest, but no one's going to complete them until colliding in the grand finale.

Thrones has complicated this in its post-Joffrey period by avoiding a Level Boss-style villain -- someone that nearly every one of its characters can rally against. And few of its characters are so heroic that anyone who gets in their path becomes an adversary by default. Yes, Cersei is diabolical, but she earned genuine sympathy points after an even more calculated religious organization shamed her in the streets of King's Landing and Ellaria Sand murdered her daughter? The White Walkers are pests bent on mass freeze-icide, though their motivations are animalistic at best.

And then there's Ramsay Bolton, currently the show's chief sadist. He has done his best to fill the Joffrey void by abusing Theon Greyjoy, Sansa Stark, and others. But whereas Joffrey could piss off a band of warriors halfway across the continent, the Bastard of Bolton's evil moves rarely ripple into the outside world. Instead, his extreme behavior only serves to test the audience's will.

While he is certainly hateable, as are many other characters on the sprawling series, there's no one on Game of Thrones who is fun to hate anymore. And while the weekly machinations draw us in, the show relies on the audience's projection to grease the wheels. We can conjure a villain with theories and fan fiction, look to the books for clues, fan the fire of a hero's journey to separate Thrones from a week of Doonesbury cartoons.

That's why I loved Joffrey. He sped the machine up, and every character reacted like Lucille Ball gobbling chocolate off a conveyor belt. He wasn't the end goal, but a reliable wild card, drunk on his own ideology (like so many real-life political provocateurs) and capable of rippling the fabric in every other plotline. When Joffrey was in the mix, we sat on the edges of our seats wondering if blood would spill because of his unpredictable urges. Now the Thrones death count is a joke. Who will die this episode? With the anarchical Joffrey, we never knew. He was the Joker to everyone else's Batman.

Could anyone step up into the role Joffrey left behind? If the Night's King decides to gesture beyond his "bring it on" arm-lift, maybe. If (or when?) Jon Snow returns, Daenerys breaks out of a Dothraki widow convent, and Tyrion slips back into King's Landing as the ladies of Dorne attack, one could see the opponents becoming clearer. But there's no one on the three-dimensional credits map who's offering the kind of baroque shit-talking of peak Game of Thrones. That was the beauty of Joffrey (and why I hoped our bracket voters would see it my way). The Game of Thrones writers will come up with something better, some character that everyone can rally against. But what they might not be able to do is replace Joffrey's pathetic, repulsive glory.

I still think he could return. Imagine this absurd conclusion: the White Walkers make it all the way down to King's Landing. Everyone who's still alive mans the city walls -- Thrones' take on the Siege of Gondor. And just to add insult to injury, the Night's King resurrects Joffrey as an icy blue avatar. HBO would have to pull 23-year-old Jack Gleeson out of retirement, but c'mon -- if anyone deserves to die a second time, it's that bugger.

Matt Patches is Thrillist’s Entertainment Editor. He previously wrote for Grantland, Esquire.com, Vulture, The Hollywood Reporter, and The Guardian. He does not condone Joffrey's actions. Find him on Twitter @misterpatches.