You know that question people ask sometimes: If you could go back and live in another era, what era would it be? It's an absolutely deranged question, because there is truly no better time to be alive than right now, in spite of the current era's shortcomings. Dressing like the Victorians for a few days would be nice, but would you really want to live without penicillin? Would you really survive more than a day as a Viking, or a medieval knight? You overestimate yourself. Or maybe, if you're absolutely insane, you'd say you wanted to go wayyy back to the time before mankind took over the world, or even further, to when the planet was traversed by those great scaled beasts we call dinosaurs, in response to which I would smack you and tell you to go watch Jurassic Park again. There's nothing fun or romantic or exciting about living in prehistory, which is exactly what makes Adult Swim's new event series Primal so good.

Primal, which was created by animation legend Genndy Tartakovsky, started airing on Adult Swim on Monday night, and will show its final episode on Friday. Even if you think you don't know who Tartakovsky is, you do: He's one of those guys who's had a hand in creating or animating or supervising a ton of stuff you'd certainly recognize from your childhood. He started out as an animator on Batman: The Animated Series and The Powerpuff Girls, and then created the iconic late-'90s Cartoon Network show Dexter's Laboratory. 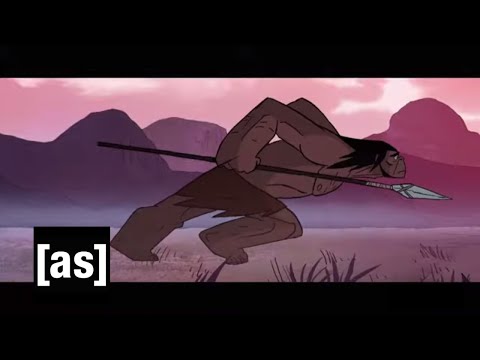 He really made waves with his Emmy-winning series Samurai Jack -- a show about a lone samurai whose ultra-powerful nemesis sends him into the future, and the samurai spends the whole show trying to get back to his own time -- and Star Wars: The Clone Wars -- which takes place during the actual war between Attack of the Clones and Revenge of the Sith, and is better than both of those movies. Since then he's been in this weird funk where barely any of his projects have been picked up, but recently, given the success of his Hotel Transylvania movie series, he's back in the spotlight, and even directed a fifth and final season of Samurai Jack in 2017.

This new show, which is only five 20-minute episodes, is set between the dawn of humanity and the fall of the dinosaurs (with some creative license taken with the temporal overlap). The main characters are a caveman and a female Tyrannosaurus rex who team up after tragedy befalls their families, and must work together to survive in a world in which everything wants to eat and/or kill them. Each episode is done in Tartakovsky's instantly recognizable animation style, with bold, dark lines and flat, rich colors on every leaf, rock, and animal. There's no dialogue that we modern humans would recognize; everything is communicated in roars and groans and screams, and, in the show's most intimate moments, through eye contact.

Each episode introduces a new opponent for the caveman and the T. rex to overcome, be it giant bats or woolly mammoths, or learning to work together as a team. The "lessons" out of every episode are no different than what you'd learn from any empathetic kids' show, but Primal is not for youngsters. Death is everywhere in this version of the past, bloody and violent and horrible. Every day of survival means a decision to kill something, either so you can eat or so that you won't be eaten. There's a lot of blood, and some very shocking moments, but the show never takes any sort of glee in the violence it shows, nor is the gore ever gratuitous. It adds to the overall effect of the show, lending a stark maturity to a story of dinos and cave people more likely to be thought up by a 6-year-old.

Underneath the flashy fight scenes, though, the show is more than anything a very deft and cutting exploration of grief. The third mammoth-centric episode (naturally) is entirely about the process of mourning your dead, taking cues from modern-day elephants' tendency to carry the bones of their lost family members. Only an animator like Tartakovsky, whose characters always have a surprising array of emotional expressiveness, could make the relationship between a caveman and a dinosaur so compelling. The second episode, thrillingly, includes a callback to one of the best scenes in The Clone Wars: a wordless fight between two opponents in the middle of a rainstorm. Like his early work, it's Primal's moments of stillness that turn it into something special.