'Girls5eva' Is the Funniest New Streaming Show of 2021

It's produced by the creators of '30 Rock'—and feels like it.

The theme song for Peacock's Girls5eva is a gloriously stupid earworm that will get lodged in your brain and you won't even mind. It's "Famous 5eva," the one hit of Girls5eva, a foursome in the mold of TRL-era girl groups, who were cast aside after the turn of the century, in part because the lead single from the outfit's second album had a chorus of "Quit flying planes at my heart." The theme's nonsensical lyrics go, "Gonna be famous 5eva / Cuz forever's too short / Gonna be famous 3gether / Cuz that's one more than together," and you'll never be free of it, even though, in the context of the show, it disappeared into the pop-cultural ether.

The comedy, created by Unbreakable Kimmy Schmidt and The Colbert Report veteran Meredith Scardino and executive-produced by Tina Fey and Robert Carlock, gives these wannabe stars a second chance. In the pilot, "Famous 5eva" is sampled by a rapper named Lil Stinker, and the girls, 20 years after their heyday, are invited to perform with him on Jimmy Fallon's Tonight Show. (Fallon, naturally, loves a nostalgia play.) What could have been a one-off gig flourishes into a renewed passion for the remaining four members of the group, who are all in their 40s and have hit personal and professional impasses.

Given its origins, it's not hugely surprising that Girls5eva seems spliced from the DNA of 30 Rock and Unbreakable Kimmy Schmidt. It could very well exist in the same universe as both of those shows, as if Jack McBrayer's Kenneth the Page might emerge to proclaim himself the group's number one fan. Meanwhile, Fey's husband, Jeff Richmond, wrote most of the music, and remains the reigning king of the pop pastiche. 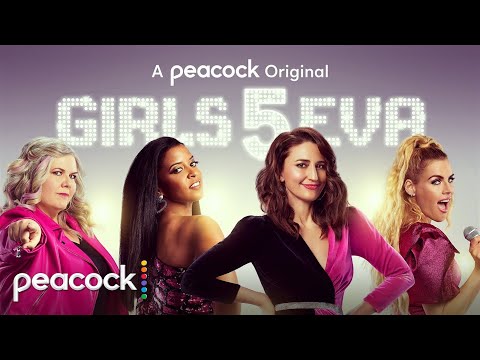 Sara Bareilles, an actually successful musician, plays Dawn (the most Liz Lemon-y of the crew), who's working in a restaurant owned by her dirtbag brother (Dean Winters, formerly 30 Rock dirtbag Dennis Duffy) and living in Queens with her husband (Daniel Breaker) and small child. She sets out to get royalty checks to her former comrades in spandex. Gloria (Paula Pell in the present; Erika Henningsen in the past) is now working as a dentist, while Summer (Busy Philipps) is a wannabe Real Housewife living in New Jersey, far away from her husband, a former boy band member (Andrew Rannells), who now is a TV host in Tampa. They all assume that seemingly successful Wickie Roy (Renée Elise Goldsberry) doesn't need the very small amount of cash they received from Lil Stinker's sample, but it turns out that her glamorous Instagram stories are all just a ruse. Ashley (Ashley Park), the fifth member of Girl5eva, perished in an infinity pool accident.

Bareilles—whose acting credits are slim outside of a stint in Waitress, the Broadway musical she wrote—is a perfect straight woman for the zaniness around her, smartly underplaying the more ludicrous lines. She takes over songwriting duties from Richmond when Dawn starts becoming the composer for the group, melding her piano-driven power ballads into the absurdity. Goldsberry, whose stunning work as Angelica Schuyler in Hamilton earned her a Tony and a Grammy, and who stole scenes as Quellcrist Falconer on the Netflix sci-fi series Altered Carbon, is just as adept playing a delusional diva who named her glass piano Ghislaine 20 years before Ghislaine was a tainted name.

The jokes in Girls5eva are sometimes complete nonsequiturs, while others are elaborate running bits across entire episodes. (The third episode has an extended tribute to the concept of the "New York lonely boy," an only child of older parents who prefers adults to other kids and loves the Strand.) But underneath the pure zaniness, there's a heartfelt analysis of nostalgia and friendship. As 20-somethings, the ladies of Girls5eva were thrust into a sexist industry where they were singing songs they didn't write about how they are "dream girlfriends" because their "dads are dead." Gloria was deeply in the closet; they all were motivated by the crass insults of their manager (Jonathan Hadary). Now they get to reclaim their dreams on their own terms. It may be improbable, but it's very funny and a little sweet.

As a show, Girls5eva just works. It's packed with brilliant, multilayered jokes; truly funny parody songs; and performances that rival the best on air. Please watch it so that it can run for a bunch more seasons.