The 11 Most Outrageous Moments from the 2021 Golden Globes

It was a weird year for the largely virtual awards show.

The Golden Globes always have a certain chaos to them—they are, of course, the drunken sibling of the Oscars—but this year's socially distant awards ceremony, hosted by Tina Fey and Amy Poehler from opposite coasts, were even more chaotic than usual. Thanks to spotty audio, confusing cutaways, and forced small talk among the Zoom-assembled nominees, the proceedings felt very awkward. It was still a historic night: Chloé Zhao's win for Best Director for Nomadland (which also won Best Motion Picture—Drama) marked only the second time a woman has taken that prize. Borat Subsequent Moviefilm was the big winner in the movie musical/comedy realm and Chadwick Boseman won posthumously for his work as a trumpeter in Ma Rainey's Black Bottom, the award accepted in an emotional speech from his wife, Simone Ledward Boseman.

The Globes have a reputation for nonsense, despite having a prominent spot every awards season. The winners are chosen by the Hollywood Foreign Press Association (HFPA), a group of 87 obscure journalists. While the HFPA and its choices have always been mocked, it came under recently renewed criticism following a Los Angeles Times report that looked into the group's shady enterprises, including ethical transgressions and misuse of funds. The Times also highlighted that there are no Black members, which explains why no Black-led movies received Best Motion Picture—Drama nominations and TV shows like I May Destroy You and Insecure were passed over in favor of fluff like Emily in Paris.

Yet the ceremony went on, with plenty of criticism hurled at the HFPA and some good, bad, and confusing moments you should know about if you missed the Globes that we've collected here. If you're wondering how these wins might impact the Oscars in April, read our Best Picture predictions.

If we're going to continue to do these awards shows from home, we need to see more pets. Regina King knows what's up and did all of her "red carpet" interviews with her dog, Cornbread, a 14-year-old Shepherd-Labrador-Akita mix, snoozing in the background. King, a nominee for best director for One Night in Miami, looked incredible, wearing Louis Vuitton, but all eyes were on Cornbread, who was just peacefully snoozing on a comfy looking bed. Cornbread is both a good boy and our winner for Best Supporting Dog at a Socially Distanced Awards Show. Congrats, Cornbread!

A year into All Of This, many of us have experienced technical difficulties when dealing with the new ways we have of connecting with each other. Poor Daniel Kaluuya, after winning Best Supporting Actor in a Motion Picture for his role as Black Panther leader Chairman Fred Hampton in Judas and the Black Messiah, started in with what certainly looked like an eloquent and verbose speech of celebration and thanks—except no one could hear what he was saying. Presenter Laura Dern apologized for the audio problems, but luckily the issues were fixed just in time for Kaluuya to playfully scold everyone: "You did me dirty! Am I on? Is this on? Can you hear me now??" 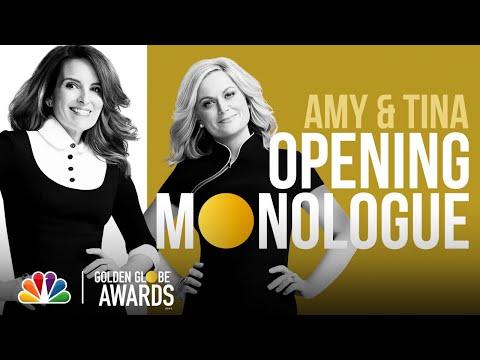 The Hollywood Foreign Press Association was repeatedly called out

The jabs started in hosts' Tina Fey and Amy Poehler's monologue, with Fey joking, "Let's see what these European weirdos nominated this year." Then Poehler became sincere. "Everybody is understandably upset at the HFPA and their choices," she said. "Look, a lot of flashy garbage got nominated, but that happens. That's, like, their thing. But a number of Black actors and Black-led projects were overlooked." Fey and Poehler weren't the only people to address the issue, and even representatives from the HFPA declared their commitment to diversity early in the show. When Sterling K. Brown came out as a presenter, he joked, "It is great to be Black at the Golden Globes," before correcting "Black" to "back." And while accepting the award for Best Motion Picture—Musical or Comedy for Borat Subsequent Moviefilm, Sacha Baron Cohen said, "Thank you to the all-white Hollywood Foreign Press." 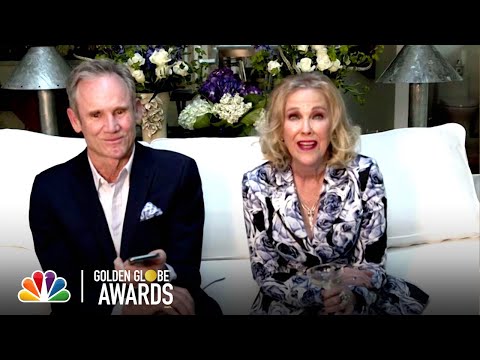 Catherine O'Hara's acceptance speech for winning Best Actress in a TV Comedy for Schitt's Creek did not play as well as her and her husband, production designer Bo Welch, might have hoped. As she started talking, Welch played a crowd applause effect off of his cellphone, which malfunctioned, making it look like he was texting disinterestedly as his wife celebrated her award. Welch eventually fixed the issue, starting up a muffled orchestra to jokingly play O'Hara off. But the audio was terrible and grating, and the whole thing was mainly just confusing. Some bits just don't work virtually.

On a night filled with stressful Zoom backgrounds, Jeff Daniels, nominated for his work in the ripped-from-the-headlines Showtime miniseries The Comey Rule, brought the most calming dad energy. He put on his best flannel shirt and set up the camera in what looked like a spare bedroom fixed up with at least four visible doors. Did he comb his hair? Unclear. Was he also cutting articles out of a magazine to send his children them in the mail? Very possible. Did he have an episode of Bosch running in another tab? Only Jeff Daniels, Zoom innovator, knows the truth.

And the award for Biggest "Welp" of the Night goes to Mank director David Fincher, who had a celebratory shot prepared no matter who got to take home the award for Best Screenplay and Best Director. When the Golden Globes ultimately went to Aaron Sorkin for The Trial of the Chicago 7 and Chloé Zhao for Nomadland, Fincher downed his own shot anyway, in full view of his camera. We'd expect nothing less from a guy who made a whole movie about an artist grappling with the agony of defeat. 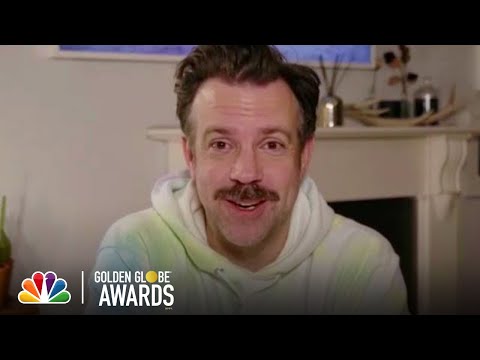 Jason Sudeikis seemed genuinely surprised to win best actor in a TV comedy for Ted Lasso. (Frankly, we were too. We were expecting another Schitt's sweep like at the Emmys.) Sudeikis was Zooming in from the UK, where they are in production on the second season, and seemed very tired of All Of This. He didn't even dress up, instead wearing a tie-dye sweatshirt, which is, after all, the uniform of Zoom. (It was a shout out to his sister's business, apparently.) Sudeikis started on a rambling speech in which he explained that he reads his son Tolstoy while his fellow nominees giggled in their own little virtual windows. In the middle of his anecdote, nominee Don Cheadle motioned for him to wrap it up. He closed out, and the quick grimace on his face after he was finished said it all.

Picking up the Best Supporting Actress trophy for her work in the drama The Mauritanian, Jodie Foster looked genuinely surprised as she accepted the award in comfy looking pajamas with her wife and her beautiful dog, Ziggy. "I think you made a mistake," she said. Then she surprised most viewers by shouting out… Green Bay Packers quarterback Aaron Rodgers? Yep, it turns out The Silence of the Lambs star is a Packers fan, and Foster's Mauritanian co-star Shailene Woodley is currently engaged to the football star, who recently shouted out Foster in his MVP speech even though, according to Foster,  they haven't actually met before. Hopefully, when this pandemic is over, these two can finally hang out together.

Barb and Star made a surprise appearance

Those that haven't seen the recent weirdo masterpiece that is Barb and Star Go to Vista Del Mar might have been confused when Annie Mumolo and Kristen Wiig came out in their respective characters to present the award for Best Motion Picture—Musical or Comedy. For those of us that are already in the Barb and Star cult it was like seeing our old friends. These two best friends from Nebraska wandered in from shopping on Hollywood Boulevard, where they informed the losers that they could buy their own plastic trophies to make up for their lack of a Golden Globe. Barb and Star are national treasures.

Maybe we've all just lost our minds entirely to this pandemic but it does appear as if the Hollywood Foreign Press has granted two Golden Globes to the Borat sequel. The intrepid Kazakhstani reporter, along with his feral daughter Tutar, played by breakout Maria Bakalova, did spend Subsequent Moviefilm traipsing around COVID-riddled America, crashing debutante balls and somehow sneaking past Rudy Giuliani's security. The film won the Globe for Best Motion Picture—Musical or Comedy category, and Sacha Baron Cohen himself took home the award for Best Actor in a Musical or Comedy. 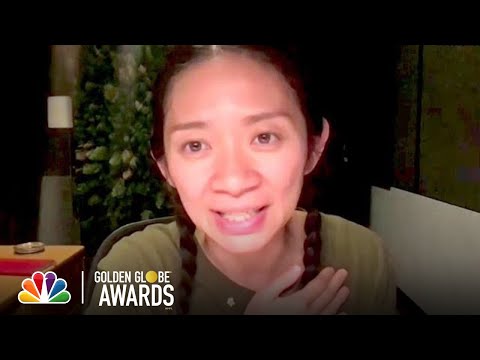 Nomadland had a big night

Nomadland, Chloé Zhao's film about a widow, played by Frances McDormand, who lives on the road, is now officially the Oscar frontrunner for Best Picture, as it closed its night at the Globes by winning Best Motion Picture—Drama. Meanwhile, Zhao herself took home Best Director, marking the first time a woman has won that honor since Barbra Streisand in 1984 for directing Yentl. Nomadland has received widespread acclaim, but many prognosticators thought it would lose out at the Globes to flashier fare like Aaron Sorkin's The Trial of the Chicago 7, which won Best Screenplay. Even though the Globes' relevancy was called into question this year more than ever, the good press still means that Nomadland is riding high when it comes to the major trophy: the Academy Award.