The 11 Most Outrageous Moments from the 2021 Grammys

This year's Grammys was a surprising rare treat of an awards show.

The question going into tonight's Grammy Awards was: How would a show that largely relies on live performances and reaction shots adapt for a pandemic? The answer was: Incredibly well. The pared-down festivities, which took place mostly outside of and around the Staples Center in Los Angeles, were not just one of the best examples of a televised event in the age of COVID, they made for one of the most entertaining Grammys in recent memory. The lack of fanfare gave the performances a chance to shine, with exciting sets from Cardi B and Megan Thee Stallion, Bruno Mars and Anderson .Paak's new collaboration Silk Sonic, Taylor Swift, Harry Styles, DaBaby, BTS, and more. Beyoncé broke a huge record, Megan was charmingly shocked after she won Best New Artist and Best Rap Song, and Swift's folklore won Album of the Year. Here are the best moments from the surprisingly delightful evening.

The Strokes awkwardly accepted their Grammy

Though the Grammys had more of an in-person element than most pandemic awards shows, that didn't mean there weren't some wonderfully awkward moments thanks to virtual technology. Case in point: The Strokes' Rock Album win for The New Abnormal, handed out during the pre-show. The band, who collected their first Grammy at this year's ceremony, was on a delay from an otherwise empty bar during a game of pool and had no idea they won for a good couple of seconds. They start asking, "It's cutting out, who won? ...Did we win?" And then they erupted in celebration when they actually found out that they did indeed win. 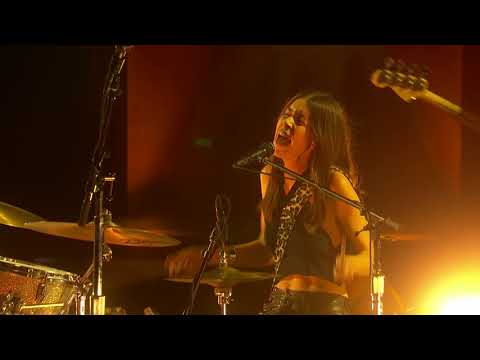 After a quick introduction to the socially distanced setup adjacent to the Staples Center from host Trevor Noah, the show opened with a trio of performances from Harry Styles, Billie Eilish, and Haim in a cavernous space. What at first might have seemed awkward was actually incredibly charming. Instead of cutaways to the audience members, there are just cutaways to the other artists who are either on deck or who have just performed. So Billie Eilish eyed Styles as he strutted around in a leather suit sans shirt to "Watermelon Sugar," and Styles bopped to Haim as they rocked out to "The Steps." And when the Black Pumas did a rendition of their hit "Colors" just a short while later all the other artists were there to cheer them along. It was like a tiny little music festival, making us extremely jealous that we weren't there.

Lizzo was tasked with announcing the coveted Best New Artist award, and in the 30 seconds she graced the stage, she made sure the crowd was aware she’s a three-time Grammy winner herself, belted out a verse of her hit "Cut I Love You"—because why not—and yelled, "Bitch, I'm back!" The hip-hop artist quickly realized she shouldn’t have sworn on the live broadcast, and started laughing at herself—as did Best New Artist nominee and Lizzo collaborator Megan Thee Stallion. Lizzo called her out, saying, "Megan, stop laughing at me," before announcing that Meg was the award's winner.

DaBaby, of course, was the focal point during his performance of "Rockstar," featuring Roddy Ricch, but his backup singers came very close to stealing the spotlight. The "DaBaby boomers," as Noah deemed them, were a group of women of a certain age in robes who truly gave it their all. Desus Nice compared them to Judge Judy. Music critic Craig Jenkins decided it was a Ruth Bader Ginsburg tribute. Whatever it was, it was utterly charming to watch these gals sing so emphatically next to one of rap's most exciting stars.

When Taylor Swift released her dual pandemic albums folklore and evermore, many observed how she was embracing the cottagecore aesthetic. She took that to its endpoint during the Grammys, performing on top of and in an actual cottage on stage along with her collaborators Jack Antonoff and Aaron Dessner. Swift's medley of "Cardigan," "August," and "Willow" mashed up the visual styles of Lord of the Rings, Stevie Nicks, and Melancholia, with just a touch of FernGully. It brought together various things Swift has loved over the years: princess attire, sparkles, acoustic guitars, and laying in grassy fields.

Bruno Mars and Anderson .Paak had already killed it earlier in the night in their debut performance as Silk Sonic with the duo's first single, "Leave the Door Open," that walked the perfect line between absolutely goofy and pure sex appeal. It opened with a '70s-esque title card to the group wearing matching tan suits and bedazzled sunnies while delivering sensual choreography and the sultry tune. But later, during the Grammys' In Memoriam segment, they seamlessly time traveled to the '50s to honor the late rock music icon Little Richard with exhilarating covers of "Tall Sally" and "Good Golly Miss Molly." Mars even brought Richard's stage presence and pencil stache. Safe to say Silk Sonic were the unsung heroes of this year's Grammys.

Cardi B and Megan Thee Stallion brought WAP to CBS

Look, you don't usually tune into CBS on Sunday evening to get something as wild and as wonderfully suggestive as what Cardi B and (now, three-time Grammy winner) Megan Thee Stallion brought to their performance of the Song of Summer 2020, "WAP," at the Grammys. Their dual performance started with Megan doing a version of "Savage," which shortly thereafter won Best Rap Song, complete with a showgirl flare and tap dancers, while Cardi brought robot Bond girl to her new single, "Up." And then they unleashed "WAP" onto the world. The set involved a giant stripper heel that doubled as a pole and an oversized bed. Sure, they had to use the (frankly, way grosser) lyric "wet and gushy," but we have to presume many viewers were scandalized. It was awesome.

Trevor Noah nearly accosted Megan Thee Stallion and Beyoncé after they took home the award for Best Rap Song for "Savage," not letting them leave the stage before he could make an announcement. What possibly could have been so important that he stopped Beyoncé dead in her tracks? Grammy history was made, and he had to share that Bey was tied as the most Grammy-winning woman artist with 27 Grammys. Her reaction was pretty priceless: looking totally shocked to learn the news in real time. But, being that she's Queen Bey, the recording artist broke her own record just moments later—becoming a 28-time Grammy winner with her win for Best R&B Performance with "Black Parade." It's an amazing honor, but observers were quick to point out the ways in which the awards body has also snubbed her in ways that highlight its biases.

BTS won over new fans from a rooftop in Seoul

BTS, making history as the first-ever South Korean group to be nominated for a Grammy, absolutely brought it to their awards ceremony performance. After crashing last year's show during Lil Nas X's "Old Town Road"—what's been dubbed "Seoul Town Road"—the seven-member K-pop band earned a solo broadcast performance slot this year. Though they lost in the pre-show for Best Pop Duo/Group Performance to Lady Gaga and Ariana Grande's "Rain On Me," BTS shot a dose of positive energy into the end of the show with their nominated single "Dynamite," the band's first song written entirely in English. ARMY, BTS's fandom, had already been flooding Twitter feeds with support (and irritation with the hashtag #scammys), but the group's performance seemed to win over some brand-new fans with their lighthearted charm, tight dancing, and very slick coordinated suits. Beaming in from Seoul, they practically recreated the heart of the Grammys' floral set in LA, taking the choreography to a hallway, then climbing a set of stairs to a rooftop to triumphantly end their short set.

Billie Eilish—who swept the major categories last year—seemed almost embarrassed when her song "Everything I Wanted" was awarded Record of the Year. So she spent the majority of her speech showering Megan Thee Stallion with praise. Eilish explained that she was going to write a speech about how Megan deserves to win but then didn't because she assumed there's no way the Recording Academy would give Eilish the trophy. It was a moment reminiscent of Adele's speech when she beat Beyoncé for Album of the Year in 2017. It's a nice sentiment, but it also highlights how the Grammys time and time again refuse to honor Black artists, and Black women in particular.