This nautical combat movie might have played better in theaters. On streaming, it's rudderless.

Tom Hanks is not terribly excited about viewers watching Greyhound, the World War II drama he wrote and starred in, on Apple TV+. In a recent interview with The Guardian, the actor explained that seeing the movie, which was originally supposed to be released in theaters in June, launch on a fledgling streaming platform was "an absolute heartbreak." (He quickly clarified, "I don’t mean to make angry my Apple overlords.") Watching Greyhound on a computer, with its hulking ships squeezed into the frame typically used for watching Netflix shows and YouTube cooking tutorials, you get what he means: This movie was designed for less choppy waters.

Like many war films centered around a series of battles or a single siege, Greyhound aims for the type of total immersion that plays best in a theater. Adapting C.S. Forester's 1955 novel The Good Shepherd, which chronicles the perilous journey of an American convoy crossing the "black pit" of the North Atlantic in 1942, Hanks and director Aaron Schneider (Get Low) construct a tick-tock narrative laced with specialized naval terminology and historical specifics. (The opening uses a distracting amount of text on screen to establish bits of information.) At times, this proudly old-fashioned movie feels like the cinematic equivalent of a ship in a bottle, the type of object proudly displayed on a desk or a mantle. Don't touch it or it might break. 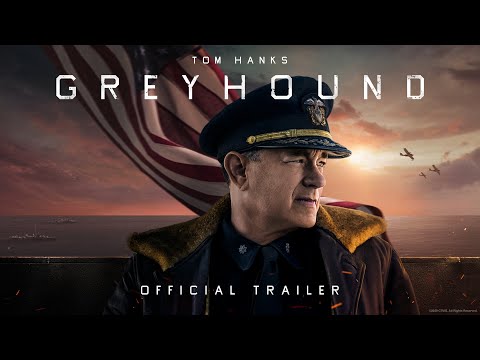 Having played stressed-out, put-upon authority figures in movies like Apollo 13, Saving Private Ryan, Captain Phillips, and Sully, Hanks writes himself a role firmly secure in his comfort zone. Captain Ernest Krause, the stiff-upper-lipped commander of the USS Keeling, keeps his men in line by providing an example of stoicism and tenacity in the face of great danger. Outfitted with only the tiniest glimmer of a backstory -- Elisabeth Shue appears as his sweetheart back home in one of the only scenes not set at sea -- Krause is a man of faith and discipline. Early on, one of the young men on the boat curses, obviously a breach in protocol, and then says to Krause, "Sorry about my language, sir." No potty-mouth sailors allowed on this ship.

Still, Krause doesn't have much time to play mentor to these nervous young men, who rarely stand apart from one another, because he's too busy dealing with an increasingly hostile tactical situation. (Stephen Graham, who stole scenes in The Irishman as a belligerent gangster last year, is one of the only non-Hanks actors to make much of an impression.) The convoy no longer has air cover, making it vulnerable to attacks from the villainous German U-boats with their taunting audio messages and snarling wolves painted on their vessels. Occasionally, the camera pulls into the dark gray sky to provide a sense of CG-assisted grandeur, a reminder of the scale of the battle, but most of the action takes place in the cramped interiors. Better to create feelings of claustrophobia and dread.

There's a pleasing quality to the way all the meticulous research is deployed in Greyhound. Words like "starboard" and "rudder" gets tossed around in a rhythmic manner, with commands getting repeated by various officers, and the pinging of the sonar, the creaking of the ship, and the crashing of the waves forms a quasi-musical cacophony that's too often drowned out by a slightly over-eager score. At less than 90 minutes, Greyhound is admirably lean, choosing restraint over bombast. It's also a bit hollow, eschewing the moral and psychological complexity of the best Hanks movies, like Saving Private Ryan or Cast Away, to instead focus on required protocols and evasive maneuvers.

On a creative and personal level, Hanks is drawn to stories of World War II, which tend to be less politically fraught than similar combat movies centered around trickier contemporary military conflicts. In recent promotional essay in Empire, he defended his choice to return to the era by focusing on how "these things happened to human beings who were just like us." Along with Greyhound producer Gary Goetzman, Hanks is currently developing the Apple TV+ bound Masters of the Air, another WWII mini-series in the same vein as his award-winning HBO hits Band of Brothers and The Pacific. Hanks likes what he likes, and, in its best moments, Greyhound revels in its own obsessive attention to detail. It's too bad the enthusiasm isn't exactly infectious.