The 2001 'The Silence of the Lambs' sequel's craziest scene is hard to shake.

As a pop-culture phenomenon, Hannibal Lecter is always on the brain. During the Super Bowl this past weekend, the broadcast was filled with advertisements for the new CBS series Clarice, a procedural that follows the FBI's intrepid Agent Starling played by Jodie Foster in 1991's The Silence of the Lambs. It's only the latest attempt, following the cult NBC series, also titled Hannibal, that aired from 2013 to 2015, to tap into the endless curiosity surrounding the world of Dr. Hannibal Lecter, the cannibalistic serial killer introduced in the 1981 Thomas Harris novel Red Dragon and made famous by the Oscar-winning turn by Anthony Hopkins. Even if Clarice must go Lecter-less for complicated rights reasons, his presence will undoubtedly be felt.

But some entries in the larger Lecter-verse evaporate on impact. While Michael Mann's 1986 thriller Manhunter, based on Red Dragon, with Brian Cox in the Lecter role and William Petersen as expert profiler Will Graham, remains a stylish favorite, you don't exactly hear people raving about 2002's Brett Ratner-directed Red Dragon, with Hopkins back as Lecter and Edward Norton as Will Graham, or 2007's nearly forgotten prequel Hannibal Rising, which tells the origin story of Lecter with French actor Gaspard Ulliel in the role.

And then there's 2001's Hannibal, a bizarre, bloated exercise in cheeky horror, directed by Ridley Scott, which turns 20 this week. Set a decade after the events in The Silence of the Lambs, the sequel, which finds Julianne Moore replacing Jodie Foster as Starling but Hopkins back as Lecter, is perhaps best remembered now, at least by me, for its ridiculous status as "The Movie Where Ray Liotta Eats His Own Brain." 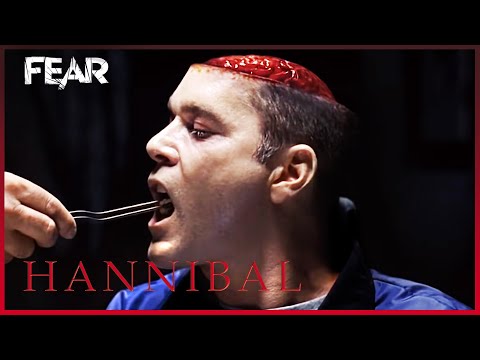 Despite grossing over $350 million worldwide at the box office and earning some positive reviews, Hannibal doesn't get talked about much except as a cautionary tale. Bryan Fuller's Hannibal series, which remixed characters and rearranged various plot elements from Harris's best-selling books, commands a legion of fans pining for more episodes and posting memes of Mads Mikkelsen as Lecter, but Scott's 2001 movie generated little love on February 9, its official 20th anniversary. Perhaps the project was doomed to be sent to the nostalgia doghouse when Foster passed on reprising her Oscar-winning role or Lambs director Jonathan Demme declined to return. Maybe the shaky source material was part of the problem.

But one thing is certain: You can't pin the blame on Ray Liotta's brain-eating scene. Playing repugnant Justice Department official Paul Krendler, the Goodfellas actor spends much of the movie being a thorn in the side of Moore's Clarice and Hopkins's Hannibal. Towards the end, Krendler gets drugged by Lecter, gets seated at a fancy table, and well... if you know, you know.

When the book was published in 1999, the ending was controversial for sending Lecter and Clarice, previously cat-and-mouse rivals, off on a romance together. In a review in the London Review of Books, John Lanchester wrote that the effect of the final passage created "a sense of discontinuity not only with the earlier books but also within the novel itself." (The reviews weren't all negative; Stephen King calledHannibal "one of the two most frightening popular novels of our time.") Inarguably, the book was gross, pitting Lecter against the loathsome Mason Verger, a pig enthusiast with a face Harris describes as "all teeth, like a creature of the deep, deep ocean." How did Verger, played by Gary Oldman in the movie, get that way? Lecter drugged him and had him feed his face to his dog.

When writer David Mamet was hired to adapt the book, he ditched the original ending in favor of a more conventional downbeat finale. The final film, which has a script credited to Mamet and Steven Zallian, keeps the decadent brain feast but ends on a silly note, with Lecter on a plane offering a leftover chunk of brain (preserved in a paper cup held in a Dean & Deluca box with caviar and figs) to a curious child on an international flight. The plane exchange is mostly stupid, a gross-out gag to give the audience something to giggle about on their way to the exits. The scene with Liotta, however, remains oddly transfixing and joyfully stomach-churning, a case of glorious bad taste surfacing in mainstream entertainment.

Movies had shown brain-eating before, particularly in zombie films, but Hannibal's high-gloss gore is different in its intent and its perversity. The scene, which unfolds in a vaguely hallucinatory haze, works in ways that the rest of the movie simply doesn't. The combination between the verbal comedy (e.g., Krendler saying "it's not very good, buddy" after sipping up some Lecter's soup) and the special effects (Liotta apparently had to wear a bunch of ping-pong balls on his head) achieves a queasy potency that raises the tension with each cut of the knife. Scott, the same filmmaker who sent a screaming creature leaping out of a man's chest in Alien, presents the gruesome sight in a decadent, droll manner. He dares you to look away.

A good deal of the scene's unsettling charm can be attributed to Liotta, who gets to do a more sedated version of his famous Goodfellas laugh as his character continues to be an absolute shitheel all the way to the end. In a video interview with GQ from 2019, Liotta said he ate "dark chicken meat" on set for its chewy texture and described his own reaction to watching the scene this way: "Oh my god, that's just disgusting." The man is right: Watching Ray Liotta eat his own brain is disgusting.

Is it a good scene in a good movie? No, I won't go that far. Is it medically accurate? I'll leave that to the experts on Quora. Would I eat my own brain? Hard pass. For much of its runtime, Hannibal finds Scott attacking the material with camera movements and editing techniques that can border on the incoherent. In the current era of careful brand management and tasteful IP-management, the movie can feel tacky and schlocky even when showing off its massive budget. But there's also a campy quality, combined with an obvious willingness to "go there," that makes this specific scene so memorable, and, if I'm feeling generous, more than an empty provocation. Arriving at the brain scene is like finding one delicious bite in a pile of proceed mush. Dig in.