This story contains spoilers for Happy Death Day 2U.

There are plenty of movies that should never get sequels. Happy Death Day, a runaway sensation in 2017, seemed engineered to be a one-off, a low-budget riff on slasher horror by Blumhouse Pictures that would have made its money back no matter what. Instead, it turned out to be surprisingly popular -- its snappy wit and themes of self-acceptance and forgiveness making it a horror-comedy sensation. The plot -- a girl is murdered and wakes up on the same day over and over until she finds out who her killer is, gradually coming to terms with her mother's death and estrangement from her father in the process -- is perfectly self-contained. So when the movie made a gajillion times its budget, the question wasn't whether it would get a sequel, but how to rejigger the story to advance the action without, you know, ruining everything that made the first film special.

Happy Death Day 2U doesn't exactly improve on a perfect formula, but it expands the narrative just enough to make a case for itself without steamrolling over what made its predecessor so popular. It begins by following a different person: Ryan (Phi Vu), the roommate of Carter (Israel Broussard), the boy whose room Tree (Jessica Rothe) repeatedly woke up in over the course of the first movie. This time, it's Ryan who wakes up over and over on the same day, unable to figure out why it's happening to him.

One change in approach is that the sequel offers a more concrete explanation of the time loops: For a science project, Ryan and his nerdy buddies have created an engine that, when tuned to the right frequency, creates folds and loops in the multiverse, sending our heroes crashing in and out of their own dimensions. Naturally, Ryan and his team turn the engine back on to try to reverse the effects, but instead of freeing Ryan from his unintended loop, it sends Tree back to her birthday, the day of all those murders. This time, though, the machine has shunted her into a parallel universe where everything is just slightly off. The professor she was having an affair with has never met her, the sorority sister who was trying to kill her in the first movie is her best friend, and Carter is dating someone else and barely recognizes Tree at all. 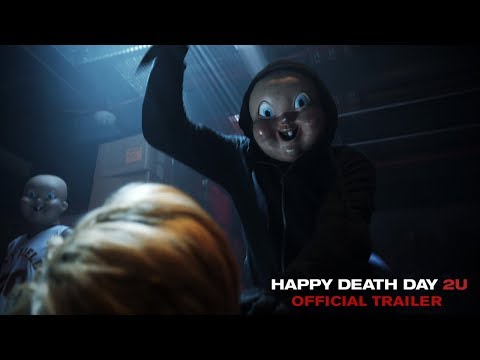 Naturally, Tree wants out of this hellscape and back into her own universe, and she spends multiple loops convincing Ryan and his friends to fire up their machine again. The catch (there's always a catch) is that in this universe, by all appearances the wrong universe, her mom -- dead for years in her original timeline -- is still alive.

That means Tree's decision on whether to stay or leave this timeline won't be easy, which is why, while Happy Death Day 2U does veer dangerously close to a universe expansion that explains away everything that originally made it special, it never loses its soul. The first movie was about Tree solving her own murder mystery by dying over and over in increasingly gory ways, but at its heart was the central conflict of Tree coming to terms with her mother's death and learning to have the hard conversations with her morose father about it.

The movie wisely addresses this conundrum head-on in an early moment of self-awareness. During a scene in which Tree and Carter are trying to protect Ryan from getting offed by the same baby-masked killer that hunted Tree in the first movie, she confides in Carter how unfair it is that the only reason she got sent back in time over and over wasn't because of some cosmic soul-searching journey to self-acceptance, but merely because of a glitch in a science experiment made by a bunch of geeky students. And yet, even with this added wrinkle, the song remains the same. Tree can't stay in a timeline she doesn't belong to, no matter how happy her mother makes her. The memories they've shared aren't her own, and in order to return to where she belongs, Tree has to accept that her mother's death -- heartbreaking, traumatic, and damaging as it was -- wasn't the end of the world.

Besides, if she goes back to her original universe, she gets to be with the boy she's fallen in love with. Once she makes her decision, it's only a matter of repeatedly dying in various creative ways in order to memorize the mathematical formula that makes the time loop machine work, while also trying to figure out who this timeline's version of the masked killer is (you can discover that on your own, since it's not what the movie is really about) and saving her friends from getting serial-murdered.

But that stuff is easy compared to the impossible choice at the heart of this film; acceptance of death remains difficult even for someone as well-versed in dying as Tree. The result is a smart, heartbreaking way to offer a reason for a sequel without explaining away everything that gave the first movie its purpose.

Seems like the story has been wrapped up for good, right? Wellllll…. if you stick around after the credits roll, there is a mid-credits scene that may or may not tease yet another sequel. Back in her home universe, a motorcade of SUVs rolls up on Tree and her friends, and a bunch of suited men get out and take them to DARPA, the secrecy-shrouded Defense Advanced Research Projects Agency, where the government is holding the time loop machine. They mention that the technology is wild and they'd like to test it, but Tree initially balks. After all, trapping anyone in a sadistic time loop is pretty cruel. But then she has an idea. Smash cut to none other than her snide, controlling sorority sister, Danielle (of "sneaky little biotch" fame) waking up in bed with a blood-curdling scream. Looks like it's Danielle's death day next.