Available to stream on HBO Max, 'Harley Quinn' centers on the lovely relationship of Harley and Poison Ivy.

My new favorite character on TV is green, mean, loves plants, and hates mostly everyone: It's Dr. Pamela Isley, aka Poison Ivy, on the relatively new Harley Quinn animated series. I'd heard rumblings that the latest spin on Harleen Quinzel was something special when it first debuted on the standalone DC Universe streaming service, but, given that I didn't have the wherewithal to sign up for yet another subscription, I waited until it debuted its first two season on HBO Max to dive in to this version of Gotham City. I got hooked -- quickly.

Harley Quinn, which stars The Big Bang Theory's Kaley Cuoco as the voice of the titular anti-heroine, has to deal with the usual problems creators encounter when they tackle Harley. Before she can strike out on her own, she has to get out of her toxic romance with the Joker. It's the same scenario that fuels this year's (also delightful) Harley Quinn movie, Birds of Prey. But while the cinematic Harley vehicle does away with the Clown Prince of Crime entirely -- throwing that horrendous Jared Leto portrayal in the proverbial trash -- in Harley Quinn, we meet her when she's fully under his thrall.

In the pilot, the Joker (Alan Tudyk) gets Harley thrown in Arkham in order to make his own escape during one of their capers. She's convinced he'll come to rescue her, but a full year passes with no word from her puddin', just a lot of doubting from her fellow inmates, among them, the Riddler (Jim Rash) and Lake Bell's sardonic Ivy. So ultimately it's Ivy who is her savior, breaking her out and bringing her to live in her greenery filled apartment with her talking plant Frank (J.B. Smoove). Why this gesture? Before Harley dove into a vat of acid, she was Dr. Harleen Quinzel, who helped Ivy have a breakthrough. In turn, Harley's earned Ivy's devotion, which she initially repays by basically ignoring everything her frustrated pal has to say. 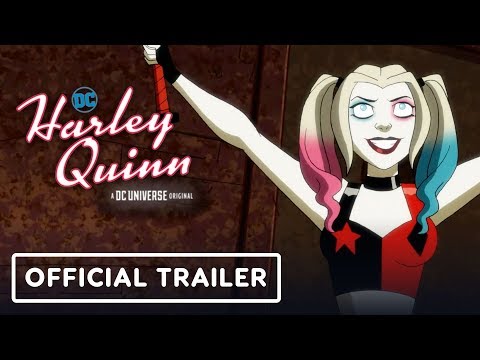 Even after some clever show-and-tell from Ivy, Harley doesn't instantly snap out of her starry-eyed obsession with the Joker. In fact, basically the entire first season of the series is about her trying to impress him, while Ivy acts as her foil and voice of reason telling her how ridiculous her pursuit is. Harley dedicates herself to getting accepted into the Legion of Doom. Here, a self-important social club with a big fish tank and cool gear. Harley assembles her own crew of misfits: Doctor Psycho (Tony Hale), a pipsqueak telepath on the outs with the LOD for calling Wonder Woman the c-word; Clayface (Tudyk), a mound of mud that considers himself a great actor; King Shark (Ron Funches), a sweetie pie computer nerd who can also bite people's heads off; and Ivy's landlord Sy Borgman (Jason Alexander), a retired spy that's half robot. (Get it? Sy... Borg... man.)

Frankly, the show is better when the Joker isn't around. Tudyk's take on the classic villain is well executed -- in the Mark Hamill mode of Jokers -- but a tad tiresome. Even when he's raging about Reese Witherspoon movies, as he does on Harley Quinn, it's hard not to feel like the Joker is played out.

Harley Quinn is at its most delightful when it's about two friends negotiating their complicated coexistence. (And, without spoiling anything, it gets more complicated as the episodes progress. If you know where these two end up in the comics, you get the hint.) From the first episode on, Ivy acknowledges that she unequivocally loves Harley, and you see that love constantly even though Lake Bell's wonderfully deadpan delivery. Harley, in her previous life, taught Ivy to tolerate other people; Ivy evolved beyond that. She adores Harley, even when Harley is too distracted by her own vendettas to notice.

The series -- which is shepherded by writers Justin Halpern, Dean Lorey, and Patrick Schumacker -- is entirely a thoroughly silly, but loving homage to the Batman lore. It takes every character to an extreme that also totally makes sense within his or her canonical context. Commissioner Gordon (Christopher Meloni) is an alcoholic whose friendship with Batman is largely unrequited. Catwoman (Sanaa Lathan) is a chic thief who could not give a shit about petty dramas. Bane (James Adomian) is a big lumbering doof who just wants to do magic tricks and arts and crafts.

Ivy is far from the femme fatale portrayed by Uma Thurman in Batman & Robin. She's perpetually pissed off and not that interested in villainy unless she's casually torturing Ace Chemical executives. When she has to destroy some trees that have turned evil, she's really sad about it. Harley and Ivy seem like opposites -- Harley is a bubbly mess; Ivy is jaded and composed -- but, over the course of the two seasons that are currently streaming, the two women parallel one another in ever more meaningful ways. They are soulmates who are learning, through each other, to diverge from their hyper-focused missions and open themselves up to emotionally gratifying relationships. All while, of course, kicking ass and starting mayhem when that's required.

It's easy to enjoy Harley Quinn for its goofy irreverence and profane humor, but what turns it into thoroughly satisfying TV is how it burrows into the push and pull between the two icons at its center. It may be named after Harley, but it's really all about Harley and Ivy.