You might not remember this, but the conception of Hobbs & Shaw, a spinoff of the Fast & Furious franchise focusing on two of its main villains-turned-heroes, was mired in petty on-set drama from the very beginning. It all started when Dwayne "The Rock" Johnson not-so-subtly called Vin Diesel a "candy-ass" on social media while filming on The Fate of the Furious was winding down, and it culminated in Tyrese Gibson calling himself a "passionate film critic" and accusing The Rock of singlehandedly breaking up the Fast Family. Fast & Furious 9 was pushed back to accommodate Hobbs & Shaw, a small interlude before the whole family returns for the next installment, but watching it will make you wish you were just watching a Fast & Furious movie.

We've survived The Fate of the Furious unscathed, and Luke Hobbs (Johnson) and Deckard Shaw (Jason Statham) are happily working for various worldwide security agencies collaring crooks and bashing heads in with their giant fists in the name of liberty and justice. Everything's going great, until an MI6 operative (who happens to be Shaw's sister Hattie, played by Vanessa Kirby) steals a deadly genetically engineered virus from an even more deadly genetically engineered superhuman (leather-clad Brixton, played by Idris Elba) and Hobbs and Shaw are brought in to save the asset and neutralize the virus before it kills everyone on the entire planet. Don't you kinda miss when the worst thing anyone did in these movies was steal some DVD players? 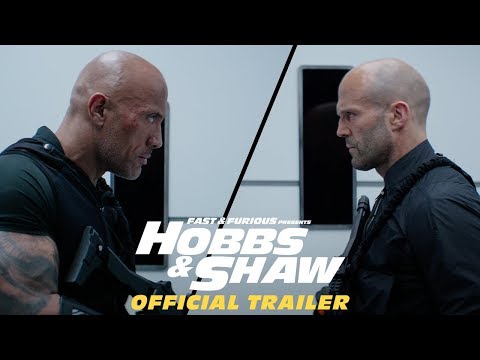 At first, Hobbs and Shaw make a terrible team, constantly insulting each other's appearance and making references to the size of their… you know. The banter is terrible, and unfortunately there's A LOT of it. I lost track of how many times male genitalia was discussed over the course of this movie's two-hour-plus runtime. Shaw calls Hobbs fat, which he obviously is not, and Hobbs retaliates by making fun of Shaw's "short" stature (Statham is a very normal 5'10"). Barely any of it is intentionally funny, and a lot of it is saved for a few bizarre and distracting secret cameos from other A-list stars. Is it the writing? Is it them? The Rock has consistently been better as a beefy, scowling action hero than a comedian (name one good comedy of his, I dare you), but Statham has proven to be a genuinely funny dude in the right circumstances -- please just watch this clip from Spy, the best scene ever filmed.

It's not until the duo gets to Hobbs' home island of Samoa (of course) that they realize the only way to take Brixton and his army of evil geneticists down is by working as a team to defeat them, enlisting Hobbs' estranged family members, each more muscly than the last, to form an army of cars and scary-looking wooden weapons. (Johnson's fellow WWE star Roman Reigns, perplexingly, barely gets anything to do besides Look Large.) The action sequences, especially the fights, are really good, and that's thanks to David Leitch, who was one half of the duo that brought John Wick to life. Vanessa Kirby in particular is incredible, throwing punches and jabbing elbows with the best of them -- though, I'll just say, my kingdom for an action movie without a tough, attractive heroine reduced to choking bad guys out with her thighs.

If you have the patience to stick out the first two-thirds of the movie, the big car chase finale, during which Hobbs and his "usos" chain a bunch of cars to a helicopter in a preposterously long crazy train of kitted-out trucks, may make it all worthwhile. These movies like to remind us that they're all about the power of family, but we all know they're really about cars. All we want out of a Fast & Furious movie is the increasingly over-the-top chases featuring a bunch of sweet whips. During this one, my whole theater "OOOOOH"-ed despite ourselves at a moment when Brixton skids his motorcycle, sideways, underneath the bellies of two giant 18-wheelers. Hobbs & Shaw is at its best when it's not trying to give each of its leads dueling tight fives, and instead leaning into the ridiculous corniness of the concept. Elba's villain is the only character who consistently accomplishes this, constantly giving himself monikers like "Black Superman" and at one point growling, "have a day off" after tossing a goon out of a helicopter in flight.

You don't really need to go into Hobbs & Shaw (whose full title is Fast & Furious Presents: Hobbs & Shaw) knowing a whole lot about the Fast & Furious series if you don't already. Both men were introduced as villains: Luke Hobbs used to be a Diplomatic Security Service agent who tried to arrest Dominic Toretto in Fast Five before deciding that Toretto was a good guy after all, and Deckard Shaw (Statham), introduced in Furious 7, is the brother of former Fast villain Owen Shaw who took his revenge on the family by killing Han Seoul-Oh (still stings!) before Mr. Nobody recruited him to help them out when an evil hacker kidnapped Toretto in The Fate of the Furious. But all Hobbs & Shaw seems interested in is making jokes out of the fact that these two big dudes don't play well with others, and especially each other.

Which, sure, is a funny trope that's especially charming in a spy movie setting -- we have to work together to save the world, but dang if we won't get on each other's nerves while doing it!! -- but something seems totally off here. The script, co-written by Chris Morgan (who has been writing on the Fast & Furious series since Tokyo Drift) and Drew Pearce (who directed last year's tough-as-nails action caper Hotel Artemis and has writing credits on movies like Mission: Impossible -- Rogue Nation and Iron Man 3) is probably the talkiest script in the entire Fast & Furious franchise, with entire scenes devoted to ribs and wisecracks and playful insults shared amongst the two leads, but at a certain point you'll find yourself wishing that they'd just shut up and drive.