The Zoom séance gone wrong was one of the first productions to film during quarantine.

More than half a year into a nationwide quarantine, the "2020 feels like a horror movie" comparisons have gotten more than a little stale. For those of us who haven't been expected to go into work every day, be on the front lines fighting COVID-19, or have caught the virus ourselves, it's mostly been super boring and more than a little lonely to be cooped up indoors over the nicest part of the year. Maybe a lot of us are so sick of it all that we'd rather go about our daily lives again, pretending it doesn't exist. Leave it to movies like Host, which made its debut over the summer on Shudder and is now on VOD, to remind us that, even within the safety and mundanity of our own homes, there are still plenty of things to be afraid of.

Filmed over the course of just 12 weeks and set right in the middle of quarantine, Host is the "most 2020" movie to be released this year -- and perhaps will remain the most 2020 movie of all time. The movie takes place entirely over the course of a meeting between friends over Zoom, the video chatting platform that took off during quarantine as friends and offices searched the Internet for a way to stay connected; all you see is what's visible in the chat windows onscreen, in the same vein as other "computer screen films" like 2014's horror movie Unfriended and 2018 mystery thriller Searching. What's coolest about Host is that the whole thing was legitimately done with all of its stars in separate places, dressing their own sets and learning how to do their own special effects. 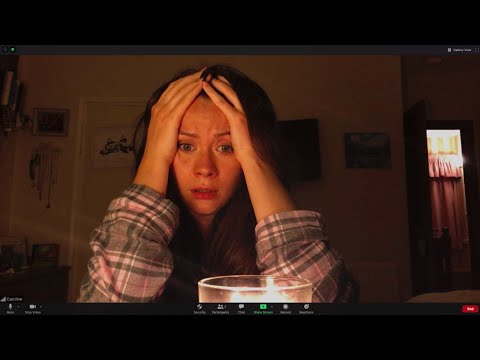 The movie begins with Haley (Haley Bishop) launching a weekly Zoom call that she and her friends have started doing in order to keep in touch. The rest of the group arrives in the chat room one by one, joking and catching up and complaining, as we all do, about how dull quarantine has been for them all. For this week's chat, Haley has invited her friend, a medium named Seylan (Seylan Baxter), to hold a séance during the video call. Everyone gathers their candles, their special objects that once belonged to a loved one now passed, and dims their lights to begin communing with the world of the dead. Naturally, it all goes horribly, terrifyingly wrong.

At only 57 minutes long -- the length of your average Zoom call -- Host is lean and expertly paced by director Rob Savage, giving the characters plenty of time to comfortably set the scene before starting in with the scares. Haley has a closet door that keeps opening by itself, sending brooms and ironing boards crashing to the floor, and another of the girls has set up a fake background of herself walking into the room and rummaging inside her dresser -- the kind of stuff you know will come into play later on.

Host is also irrevocably tied to the year 2020 in a way that no other movie, no matter how faithfully it recreates the pandemic, would possibly be able to emulate. The movie plays on anxieties already heightened because of the situation we're all in, anxieties we've been feeling for so long that for most of us they've dulled into omnipresent background noise. During one of its tensest moments, two characters take care to bump elbows instead of hugging. Like the coronavirus, the demonic threat that terrorizes each of the friends is invisible, yanking chairs around rooms and exploding wine glasses, only appearing in physical form when it's far too late to stop it.

The most ominous part of the film appears, however, at the very beginning: As they're setting everything up, the medium Seylan explains with an otherwise throwaway line that they're all a little bit less protected because they're not all physically together. The cruel reality of this pandemic is that in order to stay safe, we must keep apart from each other, that the human instinct to come closer in times of fear has now become dangerous. Of course we're all a little bit more afraid of what's going on because we don't have the security of being able to stick together. In Host, the girls' grave mistake, as it is with all movies that start with people messing with séances or Ouija boards, is not taking it seriously. The movie feeds on the terror we've all been feeling this year, even though we know we've been doing the right thing: You're alone in your house, at the mercy of an unseen villain, and no one is coming to save you.