The Tim Robinson sketch masterpiece is back for round two and it's just as brilliant as the first.

At long last, Netflix has finally given us I Think You Should Leave Season 2, a second batch of brilliant sketch comedy starring Tim Robinson. The six new ITYSL episodes are just as gloriously absurd as the six from Season 1 and avoid the trap of repeating bits we can now recite by heart. In other words, no one turns up wearing the much memed hot dog costume. Instead, Robinson, co-creator Zach Kanin, and their writers have figured out new ways to push every situation to uncomfortable extremes.

We encourage you to watch each and every minute of I Think You Should Leave—the episodes are very short. But if you have limited time right now and just want to watch the very best ITYSL sketches, here are the dozen from Season 2 that we think are the cream of the crop.

ALSO READ:The Best Sketches From I Think You Should Leave Season 1

Episode 1
The opening sketch of Season 2, in which an office drone (played by Robinson) has his lunch interrupted by an impromptu meeting, resulting in him surreptitiously chowing down on a hot dog hidden up his sleeve, is the perfect refresher of the I Think You Should Leave sensibility and house style. But the Corncob TV sketch, a faux-commercial making a plea to save the cable channel behind a show called Coffin Flop, in which (often nude) bodies fall out of rickety wooden coffins, is the first home run of the second season. Like most of the show's best ideas, it's a simple premise pushed to the absolute limit, supplemented by Robinson's Midwestern blowhard delivery. "Just body after body busting out of shit wood and hitting pavement," he says. What more could you ask for?—Dan Jackson

Episode 1
Robinson's "Now this is gonna be funny!" prank TV host Carmine Laguzio goes undercover as Karl Havoc, who, "suffice to say, is a lot." And yeah, Karl is kind of a menace, hulking around a suburban mall looking like Leatherface under pounds and pounds and pounds of horrible-looking prosthetics, a scenario that sends Carmine into an existential tailspin about being way too hot and what good flipping over a table does for the world, as his producer (played by Saturday Night Live writer Gary Richardson) watches from a van. Like plenty ITYSL sketches, it's really about the kicker: When Carmine has finally worn down his producer to scrap the Karl Havoc bit, he goes, "Then what's the show?"—Leanne Butkovic 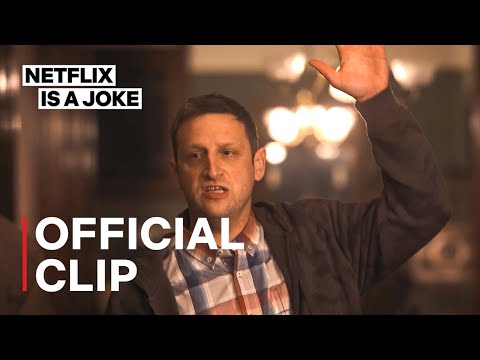 Episode 1
Ultimately, the ghost tour sketch is about loneliness, but it's also about saying "jizz" and "horse cock." Robinson's patron attends an after-hours tour of a haunted house where guests are allowed to drink and say anything they want. He takes the latter part extremely literally, calling the ghosts "these fuckers" and inquiring about "nuts." Watching Robinson cluelessly say ridiculously profane and gross things is obviously the treat of the sketch, but it's the note of melancholy that serves as a button on the end that makes it poetic in a classic ITYSL way. After being kicked off of the tour, Robinson is picked up by his mother who asks if he made any friends, to which he responds, "not really." It's a tiny tragedy.—Esther Zuckerman

Episode 2
Truly, why eat when you can buy Dan Flashes shirts? The patterns. They are so unique. Essentially a two-part sketch, the first finds Robinson playing Mike, a man who refuses to use a per diem allotted for lunch from his company to buy food, instead using it to buy extremely expensive shirts from Dan Flashes. Mike doesn't find them tacky. He finds them hypnotic and his hunger is making him extremely testy. ITYSL breaks for another sketch and then comes back to Dan Flashes later in the episode in the form of a hotel TV ad. Now you can see what power Dan Flashes has over men just like Mike. Dan Flashes drives men mad.—EZ

Episode 2
In addition to airless boardrooms and bland restaurants, Robinson loves to set sketches at parties, the type of mild-mannered social events where his characters can meltdown and cause maximum damage. This sketch, which finds Robinson's reformed "piece of shit" describing his bad boy days to confused onlookers after a baby starts crying in his arms, is one of the more straight-forward, textbook sketches in the series. But the details, like the idea of "sloppy steaks" that you pour water over and devour with your crew of fellow deviants, are so specific and warped. When the sketch transforms into a hyper-stylized music video parody and you actually see the quasi-ceremonial wetting of the meat, it becomes even more perversely surreal.—DJ

Episode 3
Robinson and Kanin have a gift for finding older character actors who steal the show. In Season 1, it was Ruben "No Good Car Ideas" Rabasa. Now it's the star of this sketch, Bob McDuff Wilson. He plays a professor out to dinner with his former students. All of them respect him greatly, but he doesn't really care about that. He just wants to eat the burger on Robinson's plate. He starts out by "joking" about stealing it. Then he houses it. And then shit gets weird. A triumphant performance.—EZ

Episode 3
A case of sloppy insider trading turns into a courtroom indictment of a dumb hat. Gita Reddy plays the prosecutor tasked with reading aloud an incriminating text exchange about "Brian's stupid fucking hat"—cue the camera shifting focus to Robinson looking dopey in the fedora with safari flaps—and unloading a bunch of stocks. The straightness with which Reddy recites the texts is already gold, but the crescendo of a boardroom breakdown reenactment to Reddy's dramatic "dollar sign emoji" closer is beauty itself.—LB

Episode 4
Robinson tries to save the day at an awkward gathering by donning a hat and sunglasses and doing a Blues Brothers impersonation. That's really all you need to know. And if that sounds funny, just realize that somehow this sketch is even funnier, taking the absurdity of the premise to yet another level when the dog starts barking thinking it's a "different guy."—EZ

Episode 4
Is the "Calico Cut Pants" sketch Tim Robinson's masterpiece? This supersized sketch, which takes up more than half of Episode 4, starts off as one thing (the notion of a website for men who dribble pee on their pants which makes it seem like the pee droplets are an intentional style of pant) and turns into something different and undefinable. After Robinson helps out the pee guy, played by former SNL writer Mike O'Brien, he explains that you have to "give" in order to keep CalicoCutPants.com alive. Rick—regular I Think You Should Leave player Conner O'Malley—is "under water" trying to keep Calico Cut Pants alive, and if O'Brien's character doesn't donate, it will disappear. Is that so big of a deal? Turns out: Yes. Robinson's ploys to get O'Brien to give keep getting more elaborate and more unnerving. The society of men who use Calico Cut Pants is strong, and quite possibly demonic. It's a spin on Fight Club about the fragility of masculinity all centered around dudes who pee sloppily in public settings.—EZ

Episode 5
A place like (the sadly no longer existing) Mars 2112 is clearly not the best restaurant to have a quiet date to talk about a serious matter, but alas! Tim Heidecker, playing a similar role to last season's obscure jazz guy, chews out the animatronic alien in the wall there to roast diners about negging his date that she should have swiped left. How could the practically teenaged voice behind it have known that her sister was addicted to drugs and her mom drank puke and big jars of music on a shock jock show for school supplies? Does that sound boring???—LB

Episode 6
Patti Harrison, who played the central nut in last season's standout "Santa came early" sketch, is once again given one of Season 2's funniest characters in dated videos shown in a drivers' ed classroom. Screaming on the phone about how Eddie Munster stepped all over her tables before getting into an accident, wiping down her tables that are so dirty before getting into an accident, and getting into it with another driver about how she doesn't respect the crypt keeper before inciting a road rage incident, Harrison as Carrie, the lady whose job is tables, could not have been better cast to confuse a room of teens about how, exactly, the tables are her livelihood.—LB

Episode 6.
The line delivery of "it's a JIB JAB" from Richard Wharton, the ponytailed old man featured in the Claire's informational ear-piercing video with 9- and 10-year-old girls, would have put this sketch in the top tier of Season 2 alone. Fortunately, the whole thing is incredible, the last sketch of the last episode representing what ITYSL is all about: the one character who sticks out like a sore thumb among the mundane, ridiculous and quotable one-liners, a twinge of existential grief, and poop jokes.—LB