I'm Too Scared to Watch the New 'X-Files' Episodes

I don't remember the first X-Files episode I watched, but I remember the room I was in. It was dark, certainly after midnight, and my parents were asleep upstairs; I was probably 9. As two FBI agents, evocatively named Mulder and Scully, investigated a paranormal crime that extended beyond my limited understanding of the world, I was filled with the fear of being caught. My parents hadn't explicitly told me that I couldn't watch The X-Files, but I couldn't shake the feeling that I was watching a forbidden transmission from the adult world.

That's partly why I became completely transfixed by this dark, funny, and terrifying show, and why I consider the 1993-2002 series one of my favorite TV shows ever. It's also why I still haven't watched Fox's six-episode X-Files mini-series, which ended its run on Monday. And I might not ever watch it, because I'm too scared.

As anyone who has ever stumbled across a cult classic on late-night television can attest, the circumstances of a pop-culture discovery can be just as memorable as the object uncovered. Growing up without cable, in a household where excessive TV-viewing was frowned upon, my viewing habits were messy and random.

Most of my formative TV time was restricted to odd hours when I could gorge without my parents noticing: early morning hours during summer vacation and late nights on weekends. So I watched a lot of daytime talk shows, '80s sitcom reruns, and whatever syndicated dramas happened to air on local affiliates on Saturday nights. Of all the forbidden shows I snuck in, The X-Files was my most formative late-night revelation.

In many ways, The X-Files provided an education in the tenets of fandom. I had obsessed over shows, books, and movies before; the kiddie sci-fi classic Eerie, Indiana, Kevin J. Anderson and Rebecca Moesta's Young Jedi Knights novels, and the Spielberg movie Hook all loomed large in my pop-addled consciousness. But The X-Files felt mature in new, exciting ways. The show was wry and creepy, tied together with a kind of noir-inflected sexuality. In the same way a band like Sonic Youth would later send me seeking out Philip K. Dick novels, The X-Files was a portal, offering countless allusions and references to unpack. It was the perfect pre-Wikipedia k-hole of cultural ephemera.

I sought out episode guides online, read YA-novel adaptations of famous episodes, and begged a friend to rent the X-Files game on PlayStation from Blockbuster. Merely reading evocative episode titles ("Herrenvolk," "The Post-Modern Prometheus," and "Jose Chung's 'From Outer Space'") and plot descriptions ("A small town is blessed by babies being born with tails") could send me on imaginative flights of fancy, creating terrifying monsters, lines of dialogue, and plot twists in my head. It was a show that existed most vividly during the boring days of the week when I wasn't watching it. 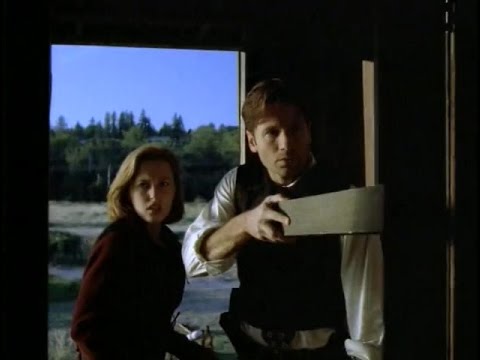 The X-Files was genuinely scary

That scariness can be attributed to the show's gory effects, Mark Snow's creepy score, and the overall mood that critic James Wolcott memorably referred to as "cosmic paranoia." There were terrifying monsters; we all remember the Flukeman ("The Host"), Eugene Victor Tooms ("Squeeze"), and Luther Lee Boggs ("Beyond the Sea"). But that creeping terror was also a result of the show's open-endedness, its refusal to offer answers and closure.

That's partly why I've always found some fans' frustration with the show's often incomprehensible larger mythology so laughable. The X-Files has always existed in a state of incompletion. By design, it resists catharsis.

Like most ghost stories or urban legends, the show works best as a haunting memory. Sometimes I find myself watching old X-Files promos on YouTube and reading the comments, which contain some of the most heartfelt, poignant television criticism I've ever read. "I saw this on a Mexican TV station when I was young it freaked the living shit out of me,” writes one commenter about the famously banned-by-FOX episode "Home."

Reading these comments recreates the actual feeling of watching the show more than any Netflix binge session truly can. "My older brother got this episode on VHS and I watched it and there you have it," writes another commenter about the season-one classic "Squeeze." "[I'm] 22 and have only seen like 3 episodes. Lol. This is by far the scariest TV show ever. And its scared me more than any of these so called horror movies."

The show made your surroundings creepy

The X-Files could change how you saw the world. As Grantland's Brian Phillips pointed out in his 20th-anniversary essay, the show was often about the tension between big-city bureaucracies and small towns. I grew up in an Illinois suburb that always seemed dull, the type of place a show like NYPD Blue, Law & Order, or The Practice would never bother to explore.

The X-Files flipped the script, suggesting that terror, chaos, and hordes of alien-virus-carrying bees could be hiding out anywhere -- in the most blighted of strip malls, in the Wendy's parking lot where teenagers did drugs and got in fights, or in the creepy pet-grooming spa where dead dogs were discovered. It didn't insist that those places were inherently interesting, but, like the work of David Lynch, it gave viewers the necessary tools to find the unseemly in mundane landscapes.

Staying up late on Saturday nights, after SNL was over, I felt like I was part of a secret cult that existed within my own family. The show moved past the first season and into the second and the third. Even though I would often read about new episodes online, the old episodes I watched on the weekends felt like they were my own. Like I was watching them on an alternate timeline or in another dimension.

Then it was gone

One day, there were no more X-Files episodes. Television syndication deals and scheduling procedures are fickle things. The series was replaced by something -- reruns of Cops, America's Most Wanted, or infomercials, maybe. It's hard to remember. Anyway, another station started airing bowdlerized episodes of the Larry Sanders Show at midnight, so I started watching those. Later, I would watch reruns of The West Wing in the same time slot.

As a teenager, I moved on to more pressing pop-cultural concerns. There were episodes of Buffy the Vampire Slayer to study, David Cronenberg movies to rent, and Wu-Tang Clan solo albums to check out from the library. Important shit to get to. Items in the canon to check off. Vast oceans of trivia to absorb. I'd occasionally catch new episodes, but mostly The X-Files receded from my mind like fog rolling through a Vancouver forest posing as New Hampshire.

The truth is still out there

I saw 2008's I Want to Believe, an atmospheric, inert X-Files movie featuring Amanda Peet and Xzibit, in theaters, with a few friends from high school. Afterwards, we stood in the parking lot and sighed together in confusion: what were we doing here? I had watched the final episode of the series, "The Truth," in 2002 and had a similar feeling. It wasn't bad, but it made me uneasy, like the version of the show I considered the GOAT sci-fi series only existed in my mind.

My relationship with the show has retained that same distance. I’ve listened to episodes of Kumail Nanjiani’s very funny, sneakily perceptive X-Files podcast as comedians riff on plot lines of episodes I’ve never seen. I've read recent interviews with Chris Carter, comprehensive lists, and pointedly mixed early reviews of the new episodes. I'm still absorbed by all the passionate cultural ephemera that swirls around the show, but I’m hesitant to return to the scene of the crime.

I get it: it's pathetic to place this much emphasis on these anxieties about childhood pop-cultural artifacts. There are few sadder sights than the Star Wars fan blubbering about George Lucas retroactively ruining their childhood, the man-child enraged by an all-female Ghostbusters movie, or the wrestling fan crying out, "It’s still real to me, dammit."

Unless you are a fanatic, the cool default response on the Internet to the current nostalgia cycle, a phenomenon cultural critic Simon Reynolds correctly identified as "retromania" back in 2011, is to approach every reboot, remake, re-imagining, and quasi-sequel with a weary resignation. "This was going to happen anyway," we tell ourselves. "So at least it's happening the 'right' way."


But I can't watch The X-Files that way

There's something different about it for me. While I'll buy a ticket for every new Star Wars movie until I keel over and die, I have very little interest in checking out these new X-Files episodes. The idea of viewing the show outside that late-night-syndicated midnight hour only makes me nervous -- I'd rather let it exist in my memories.

Obviously, I would never suggest other people should avoid the show for the same reasons. Enjoy your nostalgia trip! I bet the Darin Morgan episode is excellent! Keep shipping Mulder and Scully! And, honestly, it’s not that I’ll never, ever watch the new episodes of The X-Files.

I recently purchased an antenna for the TV in my apartment, after a few months of living with only streaming TV. It's been fun to idly scroll again, exploring the local channels and their late-night oddities. Maybe I'm searching for something? That sense of spontaneity and serendipity that doesn't exist in our OnDemand world of streaming services, peak TV, and unlimited choice. For better or worse, that's the environment that the new X-Files has crash landed in.

Sometimes it's transformative to not read the plot description. To go in blind. To surrender to the fates of an unknown schedule. Maybe one day I'll stumble upon this new X-Files mini-series with the antenna. Or, even better, maybe I’ll discover something new.

Dan Jackson is a staff writer at Thrillist Entertainment and he, like Mulder, enjoys sunflower seeds. He's on Twitter: @danielvjackson.