10 Burning Questions We Had to Ask Idris Elba, Model Human

Don't feel guilty if you didn't spot Idris Elba in the trailers for Star Trek Beyond. To play Krall, Captain Kirk's revenge-seeking adversary in the latest installment hitting theaters this Friday, the actor spent four hours each day in the makeup chair being transformed into a blue-hued sea urchin.

It might seem like a shame to cover up the The Wire and Beasts of No Nation actor's recognizable mug, until you factor in Elba's lesser-known weapon: his distinct British roar, which Krall rains down on Kirk as mightily as his punches. Currently in New York City filming the Stephen King-penned apocalyptic cowboy fantasy The Dark Tower, Elba called us up for a very quick chat that allowed us just enough time to rain 10 burning questions down on him.

Did you grow up watching Star Trek?
Apart from trying to get sneaky watches of Benny Hill,Star Trek was definitely something that I watched quite a bit of. [But I watched] more Benny Hill than my mum wanted me to watch.

What show do you need to catch every week now?
I don't watch as much TV! I like to catch the news every now and again, but honestly, I don't. You know, if I'm on a film, that's when I'll watch the TV, but there aren't so much television shows I like. And yeah, the news is always bad news, always aggravating. But it's sort of a quick way to get caught up. 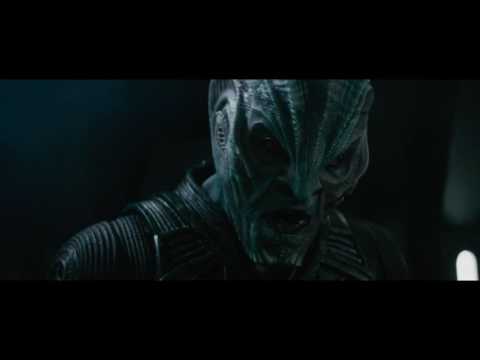 You've lived in Britain and the US. What does London have that New York never will?
Arsenal's Emirates Stadium.

And what does New York have that London never will?
Yellow cabs. We don't have any!

What's your most prized possession?
My vinyl collection. I look after it, I suppose. I have a couple of picture disks, where the album cover is actually on the vinyl. I've got a Michael Jackson Thriller one, which is pretty rare.

What's the best meal you've ever had?
I think I was in Louisiana when I had one of these $12 burgers. It was a humongous thing. It tasted good. It had jalapeños and all sorts of stuff on it.

Who are your heroes?
I think the great thing about social media is you get to connect with people that you wouldn't ordinarily, people with less of a voice box than most entertainers, but making so much more impact. There was a couple in South Africa, a young married couple, who started up a business, and that business is basically to help young people decipher around all the red tape about getting an idea out there. Whatever that idea was -- "Listen, I've got an idea for an app" or, "Hey, I've got an idea for saving money in schools" -- whatever it was, this couple set up a little bit of a soft bed for people to come in, and press their ideas, and get them connected in a right way. They do it as a not-for-profit, small little company in South Africa. I thought they were genuine heroes.

If someone wanted to be more like Idris Elba, what would you tell them?
I would say, "Thank you for the compliment." Then I would say, "Look, I work really hard. I tend not to ask permission to do anything, so if I want to do something or I have an idea, I tend to take the question out of it and just get on with it. I always feel it's good to check in with where you came from. That helps you discover where you want to go." I definitely would say, "Work really hard. Keep your head down and stay humble and grounded. Keep learning. Fear less, and win more."

OK, but how much can you bench press?
I don't weight train! I really don't. I do fight training. I do a lot of fight training, which keeps me all-around fit.

Everyone wants you to be the next James Bond. Will playing a cowboy give the Elba-for-Bond contingent the same thrill?
I couldn't compare the two. I really couldn't, but, [my Dark Tower character] Roland is incredibly complex and fun to play. As far as action is concerned, there's loads of it. He's super-skillful.