Why 'Oklahoma!' Is Crucial to the End of Netflix's 'I'm Thinking of Ending Things'

Charlie Kaufman's I'm Thinking of Ending Things concludes on a dance and a song. Put that way, the ending sounds rather simple, almost cheerful, but the truth is the conclusion is anything but. On one hand, there's perhaps an easy explanation for what takes place. On the other, it's deliberately confounding, a piece of disturbing visual poetry that might necessitate a knowledge of the musical Oklahoma! What starts as a tale of a woman going to visit her boyfriends parents for the first time, becomes a layered treatise on misery and loneliness. Let's examine it more closely.

What clues can the book provide?

You know when Charlie Kaufman adapts a book you're not going to get a straightforward adaptation. He is the man who wrote Adaptation after all, a movie about "Charlie Kaufman's" challenges writing a straightforward adaptation of a book. Author Iain Reid knew this when he initially got the call that Kaufman was interested in tackling his novel from 2016. "I just felt like I wanted Charlie to have the freedom to do whatever he wanted to take the material and put it through his filter and write the movie he wanted," Reid says.

What both versions of I'm Thinking of Ending Things share in the common is the ultimate twist, though Reid resists calling it that. Over the course of both the novel and the film, it becomes evident that the narrator does not really exist. She's the creation of her boyfriend, who in turn is also something of a construct: He's the younger, maybe idealized, version of the janitor who has appeared throughout the piece. Kaufman offers almost mundane glimpses into this man's life as he methodically cleans the high school. Reid's references to Jake's true nature are more sinister. In between chapters, the author offers unnamed voices describing a gruesome scene of suicide. "I loved what his vision was for the end," Reid explains. "I think he also never felt like it was about a twist. Really, it was about this story. I think the book and the movie are about questions more than answers."

A movie like I'm Thinking of Ending Things doesn't really exist to be solved, but Kaufman does plant clues that make these revelations almost obvious. When the Young Woman sees a photo of Jake as a child, she thinks it's herself. She shows Jake's parents her paintings, which are actually those of Tonalist landscape painter Ralph Albert Blakerock, whose posters she finds in Jake's basement. Her argument about John Cassavetes' A Woman Under the Influence is the same as the critic Pauline Kael's. Jake has a copy of a Pauline Kael book in his bedroom. Everything the Young Woman knows, Jake also knows. It's in line with what Reid was preoccupied with when writing. "I was interested in intelligence a lot," Reid says. "I was just thinking about how certain people, you know, can be very smart in a certain way. They can understand math very well, but maybe they're very shy. Maybe they have a hard time relating to people."

As for Jake's true identity: When going through his laundry, the Young Woman discovers a series of uniforms, the same ones the janitor wears. But arguably the biggest throughline is the musical Oklahoma! During the opening car ride, Jake turns on the radio. The song "Many a New Day" from the musical begins to play. When the Young Woman is surprised by his interest in the genre, Jake begins listing the musicals he's familiar with saying he knows "Oklahoma! best. They do it every few years for obvious reasons." Kaufman then cuts to the janitor, watching a teen rehearsing the song with almost unnerving intensity.

Why Oklahoma! is key

In recent years, Oklahoma! has been the subject of renewed critical consideration, starting with a scaled down, sexy production that originated at Bard before arriving on Broadway in 2019 that highlighted the darkness in the Rodgers and Hammerstein musical often regarded as uplifting jingoism. HBO's Watchmen then used it as a reference in its early episodes, scoring the images of racism in the state that bears its name. Kaufman has also seemed to pinpoint the upsetting undertones that run throughout the piece best known for songs like "Oh, What a Beautiful Mornin.'"

The first sign that Kaufman is going to loop back to Oklahoma! comes during the climax when Jake disappears into the high school and the Young Woman encounters the janitor, who offers her slippers, just like Jake. Suddenly, Jake appears at the other end of the hallway, but as soon as he emerges, both he and the Young Woman are replaced by dancers, Ryan Steele and Unity Phelan, respectively. A ballet begins. This turn directly echoes the musical, which features a dream ballet choreographed by Agnes de Mille. In the show, the heroine Laurey fantasizes about her life with the dashing cowman Curly, before she descends into a nightmare thanks to the presence of threatening farmhand Jud, who lusts after her.

When choreographer Peter Walker, of the New York City Ballet, signed on to I'm Thinking of Ending Things, Kaufman had outlined the whole sequence in the script. "It was like a whole page of direction," Walker explains. Kaufman laid out how what looks like a euphoric romance is interrupted by a dancer playing the janitor, who draws Jake into a duel and ultimately kills him.

The dance is a "direct quote" of Oklahoma! and its place in the movie thus far. You can even see a bit of the same two dancers earlier in the film, when the janitor passes by two high schoolers rehearsing. "We made a dumbed down version of it, of quote-unquote bad ballet," Walker says, noting that it's the exact same steps, just awkward. As for the actual piece, Walker discussed with Kaufman how "their relationship could be totally romanticized in a classical form of movement," and then leaned on his own personal style.

"[The choreography] is really fairly simple, it's fairly straightforward in terms of the relationship of the two dancers, but that's the only kind of the imagination he could muster and the only thing he could make sense of because he doesn't know really what a relationship like this would be like, this is all just in this head," Walker says. "The girl is not even real. She's an idea. So the look on her face is kind of blank. And she's there and she's fully invested but it's sort of this mannequin feeling of she's just a cog in the wheel of his imagination."

The music for the sequence is composed, like the rest of the score, Jay Walder, who worked closely with Walker, evoking Oklahoma! without emulating it. However, in the final moments of I'm Thinking of Ending Things, Kaufman explicitly uses a Rodgers and Hammerstein song to punctuate his story. 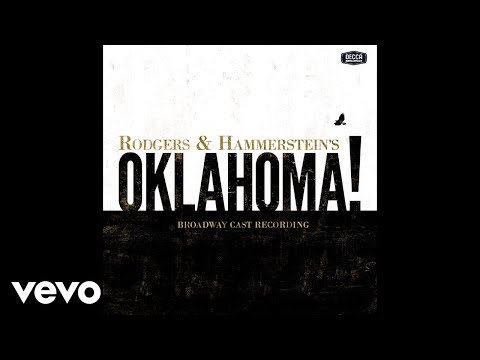 What the song means

After the ballet, the janitor finishes his duties and retreats to his car where he's met with twin visions: an ad for the Tulsey Town ice cream parlor and an animated pig, stomach crawling with maggots, who says, "join me," and leads him, naked, back into the school. When they reach the auditorium it's Jake, and not the janitor, who emerges on stage only now he's in painted-on old age makeup. Before a podium with an image of a Nobel Prize he gives an acceptance speech (lifted from the movie A Beautiful Mind) to a room full of others in the same makeup, including his parents and the Young Woman. He then launches into the song "Lonely Room."

In Oklahoma!, "Lonely Room" is performed by Jud, the character that modern interpreters of the musical have wrestled with the most. Jud is the villain of the story, the outcast who pines for Laurey. Rodgers and Hammerstein give Jud a violent edge; he's sexually frustrated to the point where he seems dangerous. He reeks of incel qualities. But he's also tortured. Curly, the ostensible hero of the story, taunts him with the song "Poor Jud Is Daid," in which Curly imagines Jud's suicide and funeral.

In one sense, "Lonely Room" is the articulation of Jud's ill will, but it's also a deeply tragic song about isolation, that serves as a shorthand for Jake's journey. Jud describes his sorry situation, and how the notion of being with Laurey is his only reprieve. He resolves to "git me a woman to call my own," a lyric Jake sings looking directly at the Young Woman in the audience. Jake, or rather the janitor, has watched Oklahoma! all these years relating to Jud's ballad. This ceremony is Jake's manifestation of his dream: being rewarded for his intelligence and celebrated by someone who loves him. But like Jud, it's hard to know what to think of Jake/the janitor. Is he a creepy old man who invented a woman and then imprisoned her in his mind? Or should he be pitied?

When the applause finishes, a bright light saturates the screen and we're met with an image of a snowed over car in the sunlight, presumably the protagonist's final resting place. As he realizes the futility of his fantasy, Jud belts: "It was all a pack o' lies." Arguably, that's I'm Thinking of Ending Things, a pack of lies that a sad old man told himself in order to keep going until he just couldn't lie to himself any longer.