How 'In the Heights' Built Its Perfect Bodega

There's no cat sleeping among the chip bags, but everything else is there.

In In the Heights, Jon M. Chu's luscious adaptation of the Lin-Manuel Miranda musical, a corner bodega is an expansive universe, the spot that houses the dreams, loves, and heartbreaks of the hero Usnavi (Anthony Ramos). It had to be perfect. From the outside, Usnavi's bodega needed just the right awning, the kind that has mostly disappeared from New York City sidewalks. Inside, it had to have shelves that felt like they had been stocked for years with products native to the Dominican Republic, Cuba, and Puerto Rico, the places where its customers originated. It also had to be able to transform, thanks to a final act twist that puts the film's framing device into a new context.

Chu, speaking via Zoom, points to the exuberant sequence that starts off the film's action as an example for just how crucial the setting is. "In the opening number, we pull back," Chu says. "Usually in a musical, you pull back and see all the dancers. Instead, we go from all the dancers and we zero in on this guy who owns the bodega. His struggles and his dreams are bigger than any main character deserves to have on our big screen. So the bodega was our church."

For Chu, his entire vision behind In the Heights was to use the streets of uptown Manhattan as a window into the fantasies of his characters. Usnavi pines to return to the Dominican Republic. His love interest Vanessa (Melissa Barrera) wants to starts a fashion line downtown. When Usnavi's bodega sells a winning lottery ticket, the whole community erupts with the thrill of what they could do with $96,000, leading to a water ballet in a community pool. Together with production designer Nelson Coates, Chu built a bodega that feels both familiar and magical.

"You can only dream of things you know," Chu says. "My idea was like: Let's not cut to a mansion when they dream of being rich, let's not cut to their past when they do a flashback. Let's do it as if it were an art installation in the street in their neighborhood. Washington Heights is always the stage."

The bodega is the nexus of the entire project. Here's how it came to life. 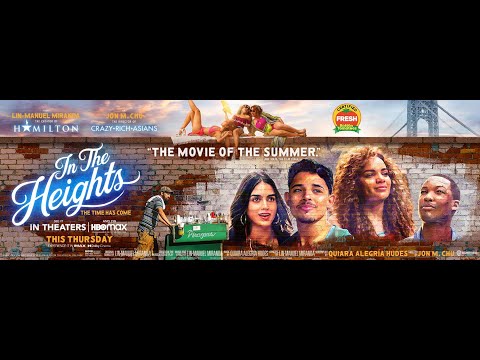 The first trick was finding the spot that would serve as the exterior of the bodega. "I walked every street of Washington Heights, Inwood, half the Bronx, and the upper half of Harlem, literally documenting salons, bodegas, shops, trying to get the qualities of what was there," Coates explains. "I couldn't find the bodega that was in my head."

From his research in the New York Public Library, he was fixated on a specific slanted awning that had largely been torn off of the existing bodegas. He finally found an example near Yankee Stadium, which he used for reference when expanding out the actual site of filming at Audubon Avenue and 175th Street. That intersection was almost lifted from the pages of Miranda and Quiara Alegría Hudes' script.

"We searched all over Washington Heights," Chu says. "There was a bodega there, there was a car service on the other corner. That corner is as is. Except for the salon. There was no salon, so we were like, 'Let's just build a little facade over there for the salon.'" The only issue was that the actual bodega was very small on the inside. So Coates expanded its exterior, and built out the interior on a soundstage. As for the original location, the proprietors got a set of new doors, since the previous ones were, according to Coates, falling apart.

Even though the interior is entirely constructed from scratch, Chu did not want it to feel like a stage. Though he built the shelves anew, Coates aged them to make it seem as if they had been stained from years of wear. "We wanted to feel the dust," Chu says. "We wanted to make sure that every product that we saw—whether it was from the DR, PR, or Cuba—there are a lot of particular cooking ingredients in homemade packaging," Coates adds. "That is very much in evidence as well as certain sodas that aren't particularly found in the 7-Eleven. There are Fantas, there are all these fruit drinks. We wanted to make sure they were represented. The types of ice cream packages. Every place had these little towers of acrylic that had the different candies in them. Some of them totally encased the cash register, but, of course, we needed Usnavi to be able to jump on top of the cash register."

The set was so well-stocked that some of the cast members started to treat it, well, like an actual bodega, just one where everything was free. "Gregory [Diaz IV], our little 14-year-old Sonny there, and Noah [Calata]—who is basically from the block, basically grew up there and is a dancer who we made Graffiti Pete—they are young boys and they would eat the snacks because they were all real," Chu says. "They would just be eating chips while we were on set. I was like, 'Bro, you can't just take candy.'"

The centerpiece of the bodega is the mural of the Dominican Republic that hangs behind the counter, a representation of Usnavi's goals. Just watch once and you may miss all the careful detail Coates infused into that representation of the protagonist's homeland. The map is decorated with all sorts of products from the actual bodega.

"It has Sweet'N Low and Equal packets," Coates describes. "It had MetroCards on it. It has the Pepperidge Farm Goldfish dancing around. It has can tops from soup cans and coffee cans." There were fly strips and keys from the key machine. But Coates also pointed out a crucial detail: When one of his crew members went on a honeymoon to the DR, he had them bring back sand to add to the mural.

The biggest change from the stage production was adding a framing device. In this version, also written by Quiara Alegría Hudes, Usnavi is telling the story of Washington Heights to a group of children on a beach. "We were inspired by our own children," Chu says. For most of the movie it seems like he's made it to the DR, running a bar on the beach just like his father did. But in the final moments, the camera pulls back, and it turns out he's been in the bodega all along. It's just a new version of the bodega, now named El Suenito, his little dream. The space now is home to a mural "by" Graffiti Pete—in reality, the art is by Coates—and a display of Vanessa's designs.

Chu wanted the reveal to feel "handmade," echoing the metaphors in Miranda's lyrics for the "Finale." Usnavi sings: "If you close your eyes that hydrant is a beach / That siren is a breeze, that fire escape's a leaf on a palm tree." That gave Chu an idea: "We are going to Keyser Soze this shit and see the things, and then we are going to realize this is the place we've always been." In the final reveal, Coates not only found a boat that could serve as the counter, he also placed items of importance to the story throughout the set, like the bottle of champagne Usnavi and Vanessa share and the record the characters play during a celebration at the home of the Rosarios (Jimmy Smits and Leslie Grace) that skips.

"I've always loved that little part of the musical and how it skips, and yet there's no detail about that," Coates says. "I came up with an old South American label of a record from the '40s. We knew what the name of it was, 'Siempre,' but I didn't have the performer. So I made it Lin's grandmother. I didn't think he'd ever see it." When Coates arrived on set the day they were shooting the scene where that record first makes its appearance, Miranda greeted him with a bear hug. "I just wanted to bless the set," Coates says.

The only thing that's noticeably absent from the bodega was a bodega cat. Chu wanted one, but they ran into an issue. "At a certain point, we wrote in a bodega cat, and Anthony is allergic to cats," Chu says. "I thought it would be so fun to have a bodega cat. He could talk to it. He always felt so bad we had to cut it out."