Finding the right punchline to a really great setup is tricky. Stand-up comedians know it, and horror directors know it too: Your especially spooky premise is nothing without a real banger of an ending, which is why so many horror movies are failures before they even begin. Netflix's new original movie In the Tall Grass, which is based on the creepy novella co-written by Stephen King and his son Joe Hill, has a remarkably good premise, but, unfortunately, its kicker doesn't stick the landing.

The film starts with a brother (Avery Whitted) and his pregnant sister (Laysla de Oliveira) driving down a long, straight highway, bordered on both sides by the kind of greenery you'd let yourself ignore on a really long interstate road trip. When they stop near a run-down church on the side of the road, they hear what sounds like a little boy (Will Buie Jr. -- who is quite good!) calling for help in the middle of a field of grass that stretches up over their heads. The two siblings venture into the grass to help the boy find his way out, but swiftly become hopelessly lost themselves. It takes them a while to figure out, thanks to a particularly chilling scene of them jumping to look over the ends of the grass at each other, that the field seems to be moving them around, switching their paths forward and backward and side-to-side with every step. 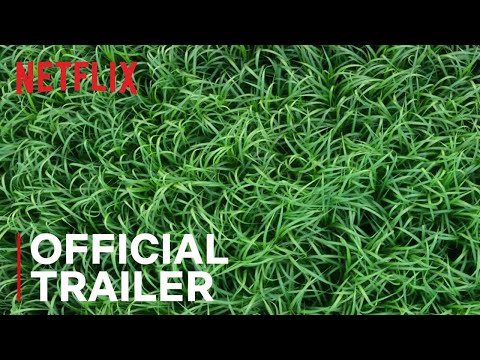 Like I said: cool premise. A field of tall grass possessed by some malevolent force that traps people inside of it forever is quite scary, especially if you've ever tried out a corn maze, confident in your sense of direction, only to find yourself confused, lost, and covered in straw by the time you reach the end of it. The grass here has a few rules: Calling out to someone won't help you find them, and the field doesn't move things that are dead. Uh-oh. Without spoiling any more, I'll just say that there's some weird temporal stuff going on as well.

The problems arise when the film starts to explain itself. Naturally, given something as intriguing as an evil field of grass, you'd want to know more about it. Why does the grass behave this way? Why has it lured these specific people inside? What does it plan to do with them other than get their shoes muddy and cause them misery? Unfortunately for In the Tall Grass, when it gets down to the reasons behind all the weird stuff, it both gives too much information, and yet not enough.

Frankly, In the Tall Grass ought to be scarier. I'm not saying that horror movies need to be scary in order to be considered horror movies -- fear is very subjective, and there are plenty of great horror movies that aren't actually considered scary, in the traditional sense. But the concept of being lost in a field of endless grass that you can't see over, while you're simultaneously starving and dehydrating to death should give this film an overwhelming sense of claustrophobia and panic that just isn't there. Part of this is simply because the characters aren't immensely compelling -- which could be partially blamed on the film's runtime, a brisk hour and 41 minutes. I cared more about the grass than I did the people, and could have turned off the movie once the twist is revealed halfway through and been perfectly happy with my choice.

The only character that is compelling is real estate tycoon dad Ross Humboldt, played by an entertainingly manic Patrick Wilson, who succumbs to the grass early on and makes for a really, really fun villain. Wilson, his villain mustache, and the beautiful way most of this film is shot, really elevate the material and make this a little more than another of Netflix's one-off horror flicks that the streaming service drops and then forgets about. There are tons of shots of grass from above, swinging and whispering in the wind, that recall the velociraptors in the long grass from the very best scene in The Lost World. Director Vincenzo Natali, of Cube and Splice, manages to make all of the inanimate objects in this movie quite creepy -- there's a huge rock that appears a few times that genuinely started to make my stomach churn every time the film cut back to it. But for all of the squelching dirt and swinging green fronds, it's as if the movie loses interest in itself, tossing an explanation for all the weirdness and then trundling back underneath the ground.