It took 14 long years for director Brad Bird and Pixar to follow up with a sequel to The Incredibles, but when we check in on the superfamily nary a second has passed. Barring a framing device, Incredibles 2 opens right where the first movie ends: with Bob, Helen, Violet, and Dash Parr getting ready to battle a bad guy who calls himself the Underminer. (Read our review here.)

But, wait, how did they get there? Thankfully, the new film wastes no time on lousy exposition and doesn't hold up the action with a rehash of old events. That said, it may have been a while since you thought about Mr. Incredible and his brood. So here's a refresher.

So who are The Incredibles?

Wow, OK, you really need a memory jog. They're superheroes! Oh, you need more? The Incredibles are a nuclear family headed up by Mr. Incredible, aka Bob, and Elastigirl, aka Helen. He's a Superman-type -- though not an alien -- and she can elongate her body to improbable lengths. They have three children: Violet, who can make herself invisible; Dash, who runs very fast; and Jack-Jack, who is a baby. At the outset of 2004 film, the rest of the family assumes Jack-Jack is the only one who doesn't have powers. Unfortunately, a babysitter is the one to discover that the tyke has them all beat. It's not really clear how his abilities are useful -- he can burst into flames and turn himself into a literal rage monster -- but they are cute and multitude! A good chunk of Incredibles 2 is spent figuring out how to handle Jack-Jack's moods without cookie bribery.

What year is it in The Incredibles universe?

Well -- to the surprise of some -- it's 1962. The Incredibles doesn't exactly hit audiences over the head with its period setting. As in, no one says, "Hey, it's the '60s," or mentions John F. Kennedy. The aesthetic is certainly retro, but you have to look very carefully to place it. Specifically, you need eagle eyes that are especially interested in Bob's reading material: a newspaper he surveys is dated "May 16, 1962." Now, if you want to get pedantic, of course The Incredibles does not take place in 1962 as we understand it. It's not like Elastigirl deals with the Cuban Missile Crisis at any point. And yet, presuming the action in the first movie didn't take a full year, it's still very much fictional 1962 when Incredibles 2 begins.

Nope! In The Incredibles prologue, we learn that superheroes were effectively outlawed by the government after a bunch of normal people began suing them for damages. (For instance, a man who Mr. Incredible saved from a suicide attempt takes legal action, arguing that he would have been better off dead. Dark!) Thus, all supers are put into essentially a witness protection program and relocated around the country. This is depressing for them, so villain Syndrome, formerly Mr. Incredible's biggest fan, sees an opportunity to lure many seeking adventure to their demise. His ultimate plan? Rid the world of supers for good, seduce the populace with his tech, and redistribute powers to all. Naturally, that goes awry, a robot starts rampaging, and our heroes must save the day. Despite their valiant acts, however, the superfamily is still operating against official law when Incredibles 2 gets underway. 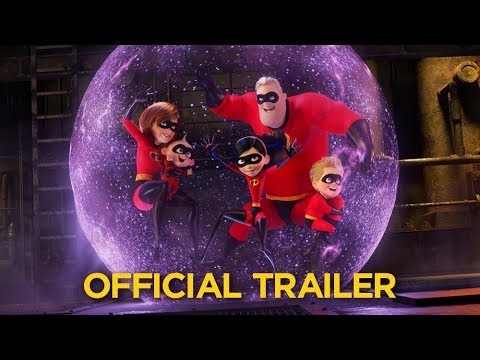 Live their lives! In the final sequence of The Incredibles, all five of the Parrs are enjoying themselves at a track meet. Dash -- holding back -- comes in second. Violet gains some confidence and makes plans with her crush to see a movie. Bob and Helen are having a great time. But when it's time to leave, they head to the parking lot, and suddenly the Underminer is there with an oversized drill proclaiming, "I am always beneath you, but nothing is beneath me." So it's time to suit up and get to (still illegal) work. And that's exactly where we find them at the start of Incredibles 2.

Is everyone back for the sequel?

Basically. All of the Parrs are there, of course, voiced by Craig T. Nelson, Holly Hunter, Sarah Vowell, Huck Milner (who replaces Spencer Fox), and Eli Fucile. Also: Their pals Frozone (Samuel L. Jackson) and fashion designer extraordinaire Edna Mode (Bird) are in the mix. (Edna, the haughty arbiter of good taste, remains the MVP.) Government handler Rick Dicker is still doing clean up, but now he sounds like Jonathan Banks. (Bud Luckey, who played Rick in the original, died earlier this year.) Meanwhile, the notable newcomers include Bob Odenkirk's Winston Deavor, a businessman with a plan to legalize supers again, and his sister, Catherine Keener's Evelyn.

And what are these movies all about, really?

Depends on who you talk to. For years, people have made the argument that The Incredibles ascribes to Ayn Rand's Objectivist philosophy, while others, including Bird, have argued that, uh no, that's not the case.  Parenting, meanwhile, has always been a major (and obvious) theme, one which the sequel doubles down on by putting Bob in stay-at-home dad mode. Also, these movies have a lot to say about the good and ill of hero worship and are both weirdly fixated on insurance. That is, when they aren't awing you with chase sequences and midcentury modern furniture.

Esther Zuckerman is a senior staff writer at Thrillist.